There have been a lot of disappointing movies in the summer of 2013 — especially comedies that ranged from awful to mildly hilarious. The standout comedy for me in recent memory is This Is The End. We’re the Millers entertained me almost as much as that romp. The sign of a great comedy is that you miss some of the material because you’re laughing so hard that you just don’t hear the next few lines. You could argue that the pacing is a bit off if you’re laughing over some jokes, but I rather like this rapid-fire model of comedy. A mixture of road trip, fish-out-of-water story and some other genres as well, We’re the Millers hits all the right notes from start to finish with a peppy script of R-rated humor and great casting.

The filmmakers involved demonstrate how that perfect meeting of the minds sometimes generates a gem. Director Rawson Marshall Thurber (writer/director of DodgeBall: A True Underdog Story) collaborated with two different writing teams for We’re the Millers. Bob Fisher & Steve Faber are the writers of Wedding Crashers, which could contribute the goofy, slapstick side of the film. Sean Anders & John Morris are the cowriters of Hot Tub Time Machine and the writers of She’s Out of My League and Sex Drive, so it’s obvious where the raunchy half of the movie originated. When these guys sat down, I would have loved to be in the room to observe the thought process that led to some scenes. “Let’s give a stripper a funny tattoo.” “I can top your kissing scene with my kissing scene.” “What would actually happen if a tarantula bit a guy’s privates? Do you still have that entomologist on the line?” I’m sure there were a lot of scenes cut from the final movie, including many outtakes like the ones that play over the credits. Regardless of the origin of specific moments, they all work together in a spirit of outrageous fun that conveys from the cast straight to the audience.

The plot involves the unlikely grouping of four people in Denver to portray a fake family during a drug run from Mexico so that authorities won’t suspect their true intentions. Drug dealer David Clark (Jason Sudeikis) gets robbed of his stash and his cash by some hoodlums. His horrible boss, drug lord Brad Gurdlinger (Ed Helms in bad guy mode), will forgive the debt if David transports a “smidge” of pot over the border from Mexico. David can’t figure out how to pull off this trip without getting caught until he sees a clueless family in a camper asking for directions. He enlists his stripper neighbor Rose O’Reilly (Jennifer Aniston), naïve teen neighbor Kenny Rossmore (Will Poulter) and local runaway Casey Mathis (Emma Roberts) to portray his fake family — the Millers of the title — for the trip. They all have living situations that make going away the right option, so let the hilarity start. 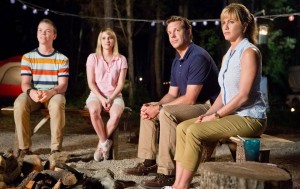 As with any road trip flick, it’s best if you discover the plot as part of the journey, so I won’t ruin any of it here. In addition to bad guys Pablo Chacon (Tomer Sisley) and his right-hand man One-Eye (Matthew Willig), the Millers encounter another family at the Tucson border crossing who help them out and provide other sources of comedy. Don Fitzgerald (Nick Offerman), Edie Fitzgerald (Kathryn Hahn) and Melissa Fitzgerald (Molly Quinn of Castle) seem like the perfect American family out on the road with their RV, but they harbor their own secrets that come out at the perfect (or perhaps worst) times. The comedic timing of the cast is perfect. Whether through rehearsals or just multiple takes, the main cast gel so well that the dialogue is snappy, natural and fresh. The chemistry of the actors playing the Millers is undeniable as evidenced by improvised scenes in the RV as they listen to songs on the radio. TLC’s “Waterfalls” is teased in the trailer, and there’s another, almost better version of this scene that plays over the credits. You know that your main cast is really good when single scenes with Thomas Lennon and Luis Guzmán don’t steal the show but instead add even more to the mix. Snark comes naturally to Roberts, so the real surprise here is Poulter, who I only remember from his debut in 2007’s Son of Rambow. Roberts and Poulter might play the kids here, but there’s no doubt that they’ve grown up a lot to handle this material.

Make no mistake about it; We’re the Millers is an R-rated movie full of filthy language, sexual situations and drug humor. “My crotch only takes twenties” is my favorite line. There are plenty more. Aniston’s stripper scenes are tastefully filmed if that’s even possible. She has a perfectly sculpted body that’s the result of whatever she’s hawking on TV or talking about with Oprah Winfrey, so I was able to accept her in this role despite the major stripping scene coming off as a bit too choreographed or edited. Nudity is kept out of the strip club and reserved for one gag instead. As much as the plot is a trip from one place to another, the script is a journey from one joke or funny bit to the next with very few slow spots along the way. We’re the Millers paces itself expertly and had me laughing from the very start to the improbable, unpredictable finale. That’s the hallmark of a great comedy, and I liked We’re the Millers enough that I’ll see it again to hear the jokes that I happily missed the first time.