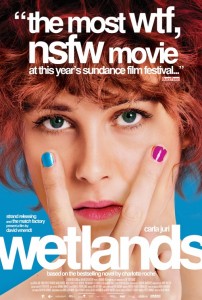 A promiscuous teenager with a bad case of hemorrhoids ends up in a hospital that’s ill-prepared for her antics in Wetlands.

As far back as Helen (Carla Juri) can remember, she’s been obsessed with her own genitalia, most notably its smell and cleanliness. Her novel approach to the subject flies in the face of the view of nearly every other woman living in civilized society. In her mind, the only way to keep a vagina robust and healthy is to continually work it out by exposing it to the most unhygienic environments imaginable. She purposely searches out hideously disgusting bathrooms so burdened by unknown pathogens that even the heartiest CDC emergency worker would run for cover. Her unique view of hygiene is just the beginning. All of her efforts have a purpose, and that purpose is to enjoy sex to the absolute fullest. She believes that her determination grants her a more natural, far more appealing scent that attracts partners like a fruit fly to a rotting peach.

The only thing that Helen can’t seemingly control — not for any lack of trying — is the distance between her divorced parents. Nothing would make her happier than to bring about their eventual, though highly unlikely, reconciliation. Her only distraction is a persistent hemorrhoidal itch that lands her in the hospital. Once there, she immediately goes to work seducing a male nurse (Christoph Letkowski) and using the event as a catalyst to draw her parents closer together. 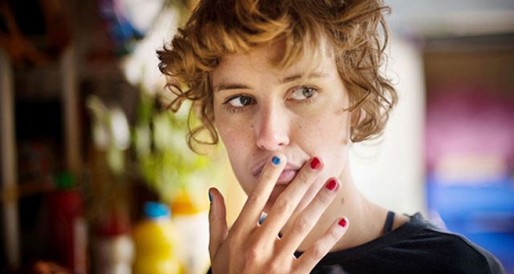 This curious German-language film is likely to be a tough view for almost everyone. It’s billed as a bit of an erotic comedy, but it is really much more of a dark drama with some awkward comedic elements. This is a film that means every ounce of its NSFW (Not Safe For Work) proclamation. It’s bluntly frank; absurdly, gloriously gross; and downright stomach-churning throughout. For a film so liberally splattered with nudity, bare skin is the last thing on anyone’s mind. If you get stressed by the sight of blood or cringe at the thought of fecal matter, this film may just put you in a coma. I can eat a seven-course gourmet meal while discussing cockroaches, open heart surgery or mangled corpses, yet this movie caused me to wince more than a few times.

Without question, its most alluring feature is its absolutely riveting lead. Juri is a star in the making who looks like she was born in front of the camera. She’s so good that everyone else in the cast comes off as entirely forgettable, with the possible exception of her nurse.