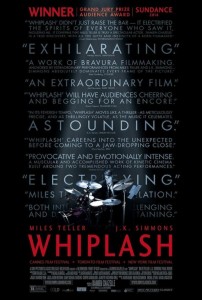 A gifted young jazz drummer enrolls in a prestigious jazz school where perfection is the only acceptable goal in Whiplash.

Renowned drummer Buddy Rich was a frequent guest on The Tonight Show Starring Johnny Carson. Even though I knew nothing about him outside the show, I would always make a point of tuning in whenever he was on. His talent was something anyone could appreciate, even a young teen with virtually no interest in jazz. This adoration of Rich’s talent is obvious to virtually every would-be drummer on the planet, and that includes Andrew Neiman (Miles Teller), who sees Rich as the embodiment of what he wants to become and possibly surpass. Although his family thinks of his dream as little more than a distraction, Andrew is determined to prove them wrong.

He enrolls himself in the country’s preeminent music conservatory, hoping to catch the eye of its revered instructor, Terence Fletcher (J.K. Simmons) — a man whose résumé is readily measured through the sheer number of successful protégés whom he’s produced. Andrew has no way of knowing that this simple goal carries with it a price that’s far more costly than he ever contemplated. His would-be mentor is a relentless taskmaster, demanding complete and utter submission to both the music and the director.

This surprising film from relatively new writer/director Damien Chazelle is a spellbinding whirlwind of exquisitely mixed emotions whose ultimate message is as polarizing as a debate between pro-life and pro-choice supporters. This will be a psychological horror film for some and a realistic pseudo-documentary on the path to success for others.

The performances from its two main cast members are exceptional. Simmons, who to date is mainly known as a solid character actor, finally gets a chance to truly shine. This is the role of a lifetime, and like his character, he makes the most of it. No one this year deserves an Oscar nod more. Teller’s performance is the critical one. We either buy into Fletcher, or we don’t — only through Andrew’s eyes and desires. Teller delivers with an ease that I find astounding. At one point, the film goes a bit postal on us, but we’re so invested in Andrew that we barely take notice. We stand by in wonder as Andrew transforms from a nerdy, band-camp-loving introvert into something entirely different, and we’re fascinated by every moment of it. It doesn’t hurt that his drumming appears every bit as prodigious as Andrew’s. Melissa Benoist also impresses as his winsome, innocent love interest Nicole.

As anyone would hope for in a film about music, the score is both captivating and effective. I’m still not a big jazz fan, but only the deaf would have an excuse for not appreciating this soundtrack.The final number alone is worth the entire price of admission.

The bigger question of the film is in Fletcher’s approach to success. His drill instructor-like mentality is one that sports athletes and soldiers will immediately recognize and accept. Everyone else will want to call the authorities. Fletcher moves through students like William Tecumseh Sherman marching towards Atlanta. This is a film that lives in the very pit of your stomach for the duration. You may despise Fletcher and his approach, but you have to stand in awe at the interaction.