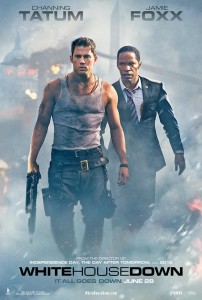 Channing Tatum as a would-be Secret Service agent and Jamie Foxx as the President in need of protection star in the new action film White House Down.

This action thriller starts off a bit story-heavy by introducing us to John Cale (Tatum), a U.S. Capitol cop trying to make the leap over to the Secret Service. He’s also a divorced father of a pre-teen daughter who’s enamored with all things presidential, so he takes her along for his interview at the White House. Seriously. Unfortunately for him, a paramilitary group happens to be attacking the building at the same time. President Sawyer (Foxx) quickly finds himself devoid of any protection and is forced to put his life in Cale’s hands.

This is a film that’s loaded from the top down with every cliché and stereotype under the sun. Nothing about it feels original. The entire White House staff, including the protection detail, can’t get out of their own way. The bad guys speak in a foreign tongue so that we know they’re not “one of us.” The conservative commentator is a jerk who’s all bark and no bite. The White House staff are all standard liberal cutouts. 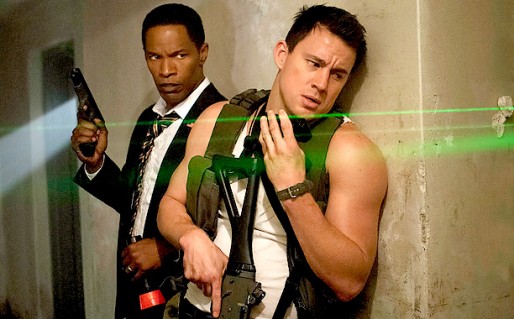 Sounds like a mess, right? Amazingly, it isn’t. While it may be formulaic in its approach, it did manage to borrow from some of the best. You’ll immediately be reminded of the original Die Hard and Air Force One, among many others. The action sequences are typically over the top, and the plot is about as predictable as plots get, yet through it all, the film manages to overcome most of the hurdles to win the viewer over.

Foxx, as the President, steals the film.  He delivers zingers every bit as effective in drawing laughs as the weapons are at creating rubble. Every time he’s off the screen, the movie suffers. That isn’t to say that Tatum’s bad. In fact, this probably sets him up as a serious potential action star for future projects. I don’t think he’s ever been better. It’s just that his backstory is so obvious and dull that I just wish the writers would have ignored virtually all of it. He’s at the wrong place at the wrong time and that’s all that really should have mattered. He plays the straight guy to Foxx’s foil, and their chemistry is simply wonderful.

We also get James Woods as the head of the Secret Service and Maggie Gyllenhaal as a staffer in throwaway roles that are really beneath both of them.

While it’s one entirely ridiculous, silly story, it’s also one heck of a fun ride.