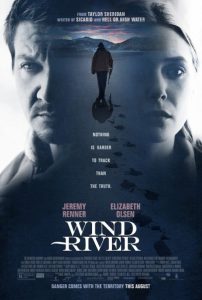 Thrillers rooted in real-life events deliver greater impact than purely imagined plots. Couple that approach with an unusual environment, and you get a movie that’s bound to grab you and not let go. Indian reservations serve as the perfect locations for thrillers because most of us don’t have any experience with them. Nearby but almost foreign lands, the reservations don’t easily offer up their mysteries. Wind River mixes the harsh realities of one reservation with a crime investigation for an unforgettable experience that leaves you chilled to the bone.

Writer/director Taylor Sheridan found his footing as a filmmaker with Wind River. Primarily an actor at first, Sheridan switched to writing with Sicario and Hell or High Water. With “inspired by actual events” flashed on-screen and titles that reveal that stats for missing Native American women are not kept like other demographic groups, Sheridan worked from an actual phenomenon to create this plot. Set on the real Wind River Indian Reservation in Wyoming, U.S. Fish and Wildlife agent Cory Lambert (Jeremy Renner) discovers the corpse of a lightly clothed, barefoot, young Native American lady who ran some distance in the snow. Soon, tough but green FBI agent Jane Banner (Elizabeth Olsen) arrives to join tribal law enforcement officer Ben (Graham Greene) in the investigation. Jane relies upon Cory’s extensive experience in wilderness tracking and local knowledge to assist her search for an explanation and any suspects. The two uncover more than they expect in a film that’s a slow burn at first before escalating into a captivating finale.

The strength of the film comes from both its environment and fine cast. Renner echoes his performance from The Hurt Locker here as a man of few words that are ultimately chosen carefully when they come out. When he’s not speaking, you can tell that the wheels are constantly turning in his head. That powerful kind of quiet perfectly informs Cory because he lives with regrets and sorrow every day and still moves forward. Olsen’s peppier and decisive Jane plays off against Renner’s performance something like light and dark. Olsen has amassed an impressive résumé in her acting career, and her efforts here rank as some of her best scenes. There’s an amusing realization that both Renner and Olsen appear in the Marvel Universe films, yet they do just fine with more serious work.

The presence of the Native American actors in Wind River takes the film from an ordinary mystery to some other plane. Greene brings a familiarity to his roles like Morgan Freeman or Tom Hanks so that you know exactly the quality that you’re going to get and just follow his lead as he shows you his latest character. Greene doesn’t even need to speak to command your attention. The other Native American actors have smaller roles, but their appearances here bring some authenticity to the proceedings. Gil Birmingham plays the father of the dead woman with such heart and intensity that I wish that he had more scenes. The Native American experience on this reservation can be summed up in one enduring image of an American flag flying upside down.

The snow and cold weather impact the story as strongly as the actors. Both beautiful and dangerous, the wintry setting makes you feel chilly even if you’re comfortable in your theater seat. That kind of effect works well for both thrillers and horror movies like The Shining. I’m sure that the challenges of filming in the snow made the shoot tedious, but the results transform a simple story into something otherworldly. The characters feel at home in the snow, so like a resident of a Southern state that gets little snow, you watch with fascination. Given the setting and the subject matter, it’s hard not to think about the original version of The Girl with the Dragon Tattoo.

Since so much of the story links to Cory’s past, I hoped for flashbacks or some other way to fill in the gaps in his knowledge. Even without those cues, Cory’s journey reaches completeness over the course of the film. In addition to the vast white landscapes, Sheridan also establishes mood with the ethereal music and vocalizations of Nick Cave and Warren Ellis at just the right times. Much of the movie doesn’t use music at all, so when it’s heard, it moves you that much more. Wind River effectively took me to a place where I’ve never been and made me a witness to a story that left me both melancholy and hopeful for the fates of the real women who lived this truth.