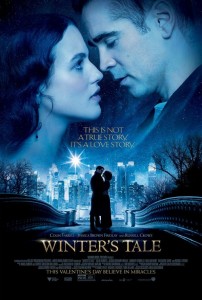 An estranged common thief is captivated by a beautiful, quirky resident of the estate he intended to rob in Winter’s Tale.

The parents of Peter Lake (Colin Farrell), hoping for a better life for their infant son, set him afloat in a model boat after being denied entry into the United States in the late 1800s. He’s found by Pearly Soames (Russell Crowe), a minion of an underworld demon, who raises the boy as a thief. When Peter decides he wants to head off on his own, Pearly and his men track him down to force him back into the fold. In the ensuing battle, he’s rescued by a magical white horse who compels Peter to attempt one last robbery. During that job, he meets and curiously befriends Beverly Penn (Jessica Brown Findlay), the daughter of a highly successful publishing magnate (William Hurt).

The story is an adaptation of a 1983 supernatural best seller from Mark Helprin. For fans of the book, much of the details here are radically altered from the original. What remains is a story that is, at once, both romantic and heavily incomprehensible. The love story elements are heartwarming, beautiful and highly engaging. Every step beyond it goes astray, and unfortunately, that’s the bulk of the story. The supernatural parts of the film feel entirely contrived and heavily overdone. Almost no explanation is given as to how everything in this somewhat similar, but entirely different, world works. 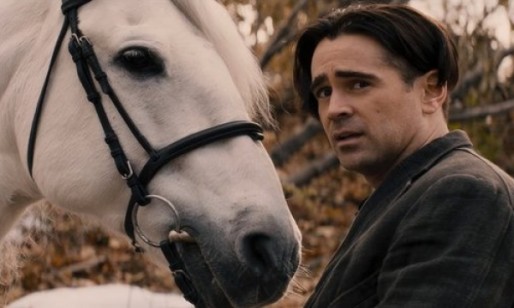 For example, while out on a walk, Beverly explains to Peter that everyone’s born with a miracle and that, when we die, we become stars. Okay, but why? Also, does everyone get a miracle, give a miracle or both? I’m not at all sure, and the characters seem, at times, just as perplexed. For me, much of the disconnect is directly tied to the whole parallel universe concept. I’m comfortable with the rules of the world I inhabit, and clearly, I bring that understanding to this world. Unfortunately, you never know what rules apply. Consider a key scene involving Hurt’s character and a basement boiler. The characters don’t react the way we expect. They’re more agitated than “usual” until we realize that, in this world, this boiler can cause an explosion unlike anything in our world. Until the audience catches on, the anxiety portrayed by the cast is entirely lost.

The film also seems to revel in knocking viewers entirely out of the moment at every opportunity. At the start of the film, the shock-value demon effects are distracting. Then we get one of the worst casting jobs in history with a surprise cameo. If that wasn’t enough, the producers decided to browbeat everyone with blatant, unavoidable product placements. Among others, we get ads for donuts, TV networks and at least two prominent car companies.

Romance lovers will find much to coo about, but beyond that, I just kept praying a groundhog would show up, fail to see his shadow and bring a quick end to this overly long winter.