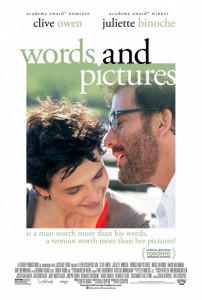 Two middle-aged, wayward prep-school  teachers debate the value of their chosen subjects in Words and Pictures.

The history of the written word goes back more than 5,000 years. The history of art-based imagery goes back even further. Both have captured the best and worst of humanity throughout our storied existence. Poets, playwrights, painters and psychopaths have all utilized one or the other to accentuate their view of the world, but which one is more powerful? Does Shakespeare elicit a deeper emotional response with language than Renoir does through color?

Jack Marcus (Clive Owen) teaches English literature at a prestigious private prep school. Somewhere over the last few years, he has lost the fire and now struggles to simply tolerate the mistakes of his own students. Even his daily habit of testing everyone’s vocabulary has become cynical and dark. Everything around him is collapsing when a new art instructor distracts him from his own self-immolation. Dina Delsanto (Juliette Binoche) is a highly-regarded artist in her own right, but she, too, is at a crossroads. Her artistic livelihood is under assault from an advancing case of severe rheumatoid arthritis. When she first meets Jack, she finds his banter off-putting and elitist, yet his way with words continues to stoke her curiosity.

Of course, each of them sees the world through the lens of their own experiences, believing the other’s core subject to be secondary to their own. A battle is begun, intertwined with an intellectual flirtation, in a school-wide contest of words against images. 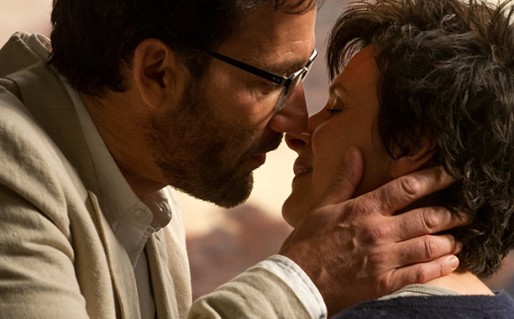 The film, from director Fred Schepisi (Roxanne and Six Degrees of Separation), feels like a multi-teacher Dead Poets Society that doesn’t have the same gravitas. The main cast isn’t the problem. Owen and Binoche’s magnetic chemistry could have ignited many a better vehicle. Sadly, a film so much about words is handicapped by a lackluster script. It’s an entirely predictable tale with almost no compelling elements to keep the audience interested. There’s also a huge problem with the character of Jack. Time and again, he eradicates ethical boundaries that demand extreme responses. Instead, we’re supposed to accept everyone giving him a mild slap on the wrist. Why? The only obvious reason is the insulting one: Jack’s just so damned good looking.

Every challenge in the film is so poorly developed that the mere force of gravity seems enough to push them all back down to Earth. Even the big finale finds that it can’t stand against its own weight. I also need to mention a late moment when, inexplicably, the two characters look at one another and give us the worst fake laugh I’ve ever seen on screen. In the end, it’s like taking part in an occasionally interesting trial that ends in a completely deflating mistrial.