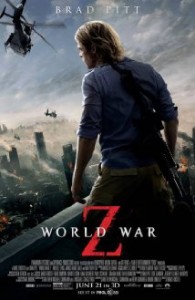 Brad Pitt looks to save his family and, reluctantly, the rest of humanity from a new pathogen that turns the infected into bloodthirsty zombies in World War Z.

Speaking of reluctance, I’ve never been a big fan of zombie films. I’ve generally found them to be as mindless as the zombies themselves. There have been some divergent differences along the way such as the hilarious Shaun of the Dead and then Warm Bodies from earlier this year. Both are comedies that poke fun at the genre, so I’m not even sure they really count. The allure of watching an endless conga line of decaying animated corpses slowly (more or less) forever on the hunt for brains just escapes me.

World War Z comes at it from a slightly different angle than most other zombie films. Essentially, the planet finds itself under siege from a new, mysterious plague that turns people into undead human-hunting machines. Its seemingly unstoppable spread threatens to wipe out all of mankind unless a cure can be found. Into that story comes Pitt, who plays a United Nations asset who seems to be a bit of a problem-solving mercenary and humanitarian. It’s left to his character to travel around the world looking for the elusive cure.

This is a somewhat smarter take on the traditional zombie story. It reminded me more of standard pandemic disease films like 1995’s Outbreak or 1971’s The Andromeda Strain. The driving force is more drama and less horror. Will the hero put together the pieces and find the cure before it’s too late?

World War Z, loosely based on a popular 2006 book from author Max Brooks, presents a very dark, very gray look that immediately conveys the dire nature of the situation. However, it can’t seem to decide which genre it wants to be in and jumps between them in a haphazard bipolar fashion. One moment it’s a brainy mystery movie, and the next it’s an effects-laden blood-and-guts extravaganza. If you measure your zombie film success by sheer number of undead, then this one has to be near the top of the list. The camera doesn’t seem to be able to find wide enough shots to present them all.

The pacing is excruciatingly slow at the start, but it does ultimately get moving toward the middle as the plot settles into a singular focus.

This isn’t a brainy film by any measure. Logic needs to be checked at the door and forgotten. Examples are about as numerous as the zombies themselves. Consider that we’re told zombies are attracted by the slightest sound, yet they grumble and growl at will without drawing any attention from the others. Then there’s the head-scratching example of Pitt doing everything he can to keep quiet but not batting an eyelash when a phone rings loudly in the same scene.

World War Z is an energetic, original but ultimately uneven affair that’s fun in parts and dull in others. The look is dour, the effects are too busy and the plot is predictable, but it does have some entertaining moments now and again.