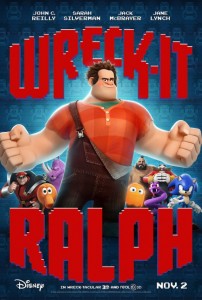 Arcades were big deals in the late ’70s and early ’80s, and as a typical teen, I spent as much time there as my meager finances would allow. For better or worse, that bug never left me like it did with nearly all of my friends. For me, arcades were magical places where a child could hone his skills in countless digital endeavors while forgetting all about the outside world — if only for a while.

The main star of the film is Wreck-It Ralph (voiced by John C. Reilly) — a character from a fictional 30-year-old video game called Fix-It Felix, Jr. (For fans of classic arcade games, Fix-It Felix Jr. looks like a combination of Rampage and Crazy Climber.) Ralph’s job is to destroy multistory buildings while players use Felix (voiced by Jack McBrayer) to repair it all.

Each night, when the arcade closes, all of the characters from the various games are able to leave the confines of their respective games. They interact with one another in a digital environment in the circuitry behind the walls. Ralph, it turns out, is feeling down about his role in the digital world. He feels that his contribution to Fix-It Felix, Jr. is every bit as important as that of its namesake. Every game, Ralph does his job with perfect efficiency while Felix gets all the glory, including being awarded a gold medal at the end of each level. If only Ralph could get one of those medals, but how? His game won’t allow it, so the only option is to look for one in another game.

In his quest to find such a reward, Ralph meets a number of very unique characters. In one game, Hero’s Duty, he meets Sergeant Calhoun (Jane Lynch), who’s an incredibly fit, no-nonsense combat soldier from a Halo-like game. His most important new acquaintance, however, is Vanellope von Schweetz (Sarah Silverman) — a brash young girl from the overly glucose-rich game called Sugar Rush (a takeoff on Mario Kart). Vanellope has got her own troubles and is intent on solving them by entering and winning the game’s racing circuit.

The film is loaded with a treasure trove of classic video game references from every era. This must have been pure licensing hell in the early stages, but the end effect is quite fun for gaming fans. Ralph’s character is perfect Disney fare with a depth that brings a Pixar feel to the effort. He’s big, bad, bold and a bit bunglesome. Underneath it all, he has a heart that’s bigger than his ample size. The supporting cast is also captivating. Silverman gives Vanellope just the right mix of innocence and moxie for everyone to fall in love with her. Lynch also has some wonderful moments as the gruff but alluring Calhoun.

The visuals are flawless and include a number of very interesting effects to convey characters of different eras. The colors jump off the screen in exactly the right way, helping to drive home the whole “this is a game world” feel.

The film does get a bit lost once Ralph finds Sugar Rush, but then it manages to get back on track for a very strong finish. I am concerned that nongamers might not enjoy it as much as gamers will. So much of the fun involves the countless classic references. (Will nonfans even know who Q*bert is?) However, I suspect the difference between them should be minimal.

While Ralph is an expert at wrecking structures, he’s also got a hidden talent for building large, lasting smiles.