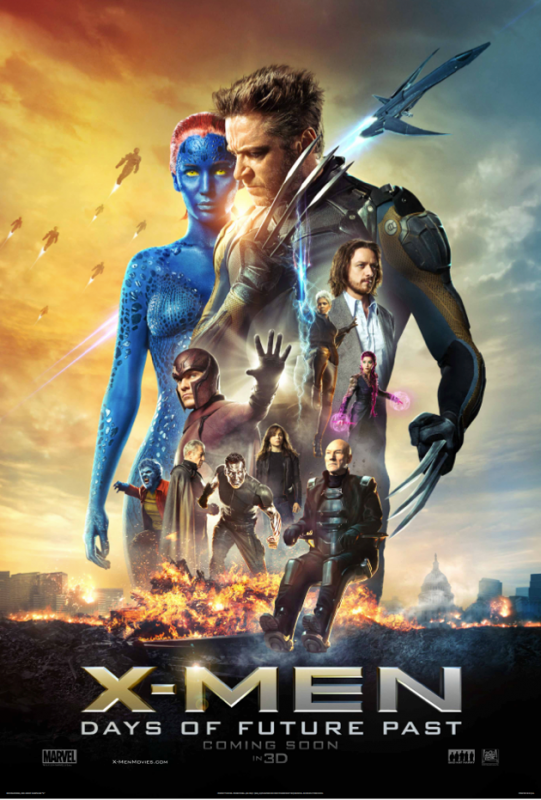 Time travel movies and others that play with temporal realities are successful or not based on the strength of the plot. You could have the best cast in the world, and it will all end up lost to time if the story doesn’t make sense or, even worse, is too complicated. Some of the best and some of my favorites are the Back to the Future trilogy, The Terminator and Groundhog Day. The newest film in the X-Men series presents its rules for time travel/manipulation up front and keeps it fresh throughout a compelling story. Except for some character problems, I found it to be the best of the series so far and a way to redefine the series for the next batch of movies. Moviegoers who haven’t seen all of the previous six films, including the two Wolverine solo projects, won’t fully appreciate all of the nuances and surprises. X-Men: Days of Future Past features the best of both X-Men time periods and adds plenty of new characters and dynamite special effects for an enjoyable summer comic book movie.

Director Bryan Singer (director of Jack the Giant Slayer and The Usual Suspects) returns to the series he started as director of X-Men and X2: X-Men United, and that’s probably a large part of why this film is so good. Singer has a knack for presenting the mutants and their powers as well as the personal problems in these characters’ lives. Writer Simon Kinberg (cowriter of This Means War, Sherlock Holmes and Jumper) also returns to the series after cowriting the script for X-Men: The Last Stand, and he manages to unravel the popular titular 1981 story line from The Uncanny X-Men and present it in a way that’s simple to follow. The rules for time travel are confined to the consciousness. A character’s consciousness travels back in time via a dreamlike state to an earlier version of the character to alter time and events. The character solidifies that reality when snapping back to the present with everyone else unaware that there had ever been a different time line.

X-Men: Days of Future Past concentrates on the characters Logan/Wolverine (Hugh Jackman) and Raven/Mystique (Jennifer Lawrence), arguably the two most popular characters in the series. Mystique killed scientist Dr. Bolivar Trask (Peter Dinklage) in 1973 to prevent further mutant discrimination, yet her actions actually led to a dystopian future where morphing robots called Sentinels rule the Earth and mutants have been hunted to extinction. In a plot that has the same feel as a flipped version of The Terminator, the last remaining mutants send Wolverine back in time to prevent Mystique from killing Trask and save their future. Things are never that easy in time travel, and there are twists and turns to the plot that force Wolverine, younger Charles Xavier (James McAvoy) and younger Hank/Beast (Nicholas Hoult of Jack the Giant Slayer and Warm Bodies) to alter their plans. The 1973 time period uses the X-Men: First Class cast members, including Michael Fassbender as a younger Erik Lehnsherr, while the present day scenes reunite Patrick Stewart as Professor X and Ian McKellen as Magneto as they wait patiently for Wolverine to fix things even as Sentinels descend on their hideout in China.

There are plenty of new mutants in both time periods to accompany the familiar ones like Storm (Halle Berry), Kitty Pryde (Ellen Page) and Bobby/Iceman (Shawn Ashmore) in the present. The new mutants steal the thunder from the veterans, and it’s a joy to see the powers of Bishop (Omar Sy of The Intouchables), Blink (Fan Bingbing), Colossus (Daniel Cudmore), Sunspot (Adan Canto) and Warpath (Booboo Stewart). The fight sequences with the Sentinels in the present day show off their powers and make those sequences feel like scenes right out of a comic book. A sequence in Saigon in 1973 briefly features four more mutants, so it’s second nature throughout the film that mutants are part of society and may very well exhibit their abilities. Because of the vast number of mutants in the Marvel Universe and even the large number of characters in the film series, it’s impossible to give them equal screen time or attention. Each character still gets at least a moment in the spotlight, and the screen time ebbs and flows to suit the story. People who want to see more of Storm or Kitty Pryde might be disappointed, but the shift in focus expands the dynamic nature of the series and certainly sets up further movies.

My biggest problem — still a minor one — with the film is how certain characters fit into the series so far. In particular, William Stryker (Josh Helman) has been portrayed by three other actors in the series at various ages. It would have been nice to have some consistency with the character as with the older and younger versions of Charles Xavier and Erik Lehnsherr. Instead, you need to map out all of the appearances of Stryker on a whiteboard, and it still might not make sense. Even worse, Evan Peters of the American Horror Story series makes his debut as Peter Maximoff/Quicksilver. The problem is that the character was already introduced in a credits sequence in Captain America: The Winter Soldier with actor Aaron Taylor-Johnson of the Kick-Ass movies and Godzilla portraying him. That cameo leads to a major role in Avengers: Age of Ultron. A contract dispute between the film companies that own the X-Men franchise and the other Marvel movies led to two actors playing the same part instead of one shared actor. It betters both film series to have one actor, and it’s a shame that they didn’t come to some sort of settlement prior to the production of these movies. 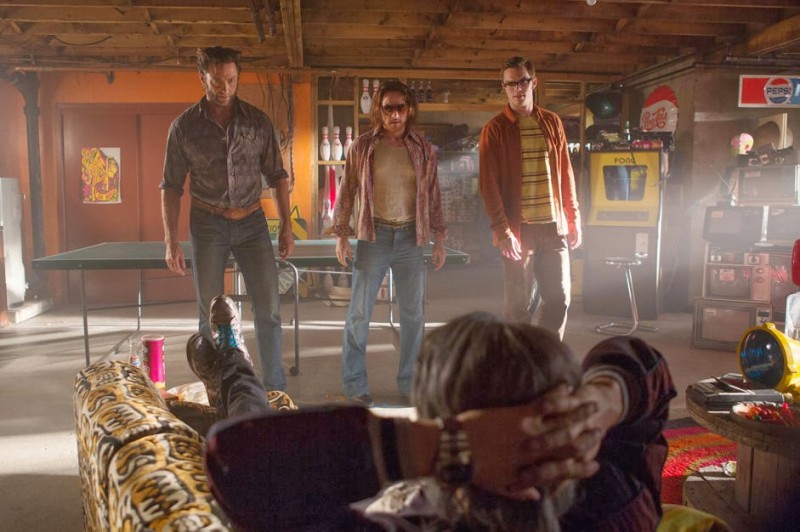 There are special effects in just about every shot of the film, from the bleak present day scenes that feature the Sentinels to the blue makeup on Lawrence and Hoult. At this point, bad special effects stand out more than good ones, so it’s a given that they should be seamless and serve the story. The Sentinels are pretty amazing movie creatures, and it’s especially impressive that they imitate mutants. A movie chock-full of mutants showcases a large variety of powers. My favorites are Blink’s teleportation portals and all of Quicksilver’s scenes. One sequence set to Jim Croce’s “Time in a Bottle” is my favorite of the entire movie and just a beautiful way to show what happens from Quicksilver’s point of view. I could watch this sequence alone as a sort of mini-movie again and again. Much is made of Lawrence and her blue body suit that she wears instead of the body prosthetics that she had before. It looks almost the same to me, and her curves are certainly highlighted. I was more taken by the fight moves and transformations into human form. Singer got the most out of Lawrence beyond the blue paint.

X-Men: Days of Future Past is a roller coaster ride from start to finish. Singer keeps the tension high and knows exactly when to mix in comedy, often involving Wolverine in some way. It’s refreshing to have acting talent along the lines of Jackman, Lawrence, Stewart, McKellen and Dinklage work on a movie like this. Jackman clearly buffed up for this role as evidenced in his many shirtless scenes, so he takes this role as seriously as he does others and will reprise it again in future X-Men and Wolverine projects. I was happy enough with the main film that there didn’t really need to be a cherry on top. Singer delivers anyway with some surprises in the last third and a post-credits scene that is worth the wait. I’ve followed the X-Men series from the beginning, and X-Men: Days of Future Past is the culmination of everything that’s good about Professor X, Magneto and all of those mutants.