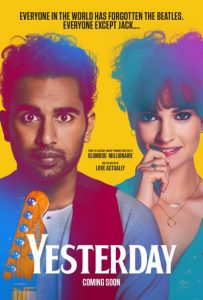 August 29, 1966. I was delivered via C-section at 11:05 AM EDT in Philadelphia, and somewhere across the universe (in San Francisco), The Beatles were preparing for their final paid concert in Candlestick Park. Why do I know that? Because the foursome from Liverpool were arguably the most influential rock band in history, leaving their mark in all of the music that I would later listen to while growing up and causing fans to list all of the important dates in their career on the Internet. What if The Beatles never recorded a single song? Yesterday toys with that premise and its effects on a single man and the people in his life. Although there are some potential holes and minor problems, Yesterday is all you need for a summer feel-good romantic comedy that reminds you that love and music are essential to life every day.

Director Danny Boyle’s eclectic list of films includes Oscar winner Slumdog Millionaire as well as others like Trainspotting, Millions and The Beach. Boyle also explored in 28 Days Later… what happens when the world changes because of one event. Screenwriter Richard Curtiss proved that he has the chops for English romantic comedies with Four Weddings and a Funeral, Notting Hill and Love Actually. The filmmakers get almost everything right in the exploration of a wild premise that you have to accept if you’re going to enjoy Yesterday. Jack Malik (Himesh Patel of EastEnders) struggles to find gigs to play his original music while working in a warehouse store. His manager and friend Ellie Appleton (Lily James) stands by him through every performance and clearly loves Jack in a way that he’s too dense to perceive. A worldwide power outage results in Jack getting hit by a bus and banging his head. Later, he discovers that the world no longer knows the songs of The Beatles when his friends stare dumbstruck at him as he plays the titular song. This fantasy takes place in an alternate timeline where Ed Sheeran takes Jack under his wing and success follows as people react to these iconic songs for the first time.

Patel and James anchor Yesterday with their chemistry and energy. I’ve never seen Patel before, but I expect that his star will rise much like that of his character. Patel has that everyman appeal, and he’s quite a good musician with a great voice, too. He sings all of the tunes in the film, often live on camera, and you’ll get a taste of what it feels like to discover Patel just as the characters discover Jack. James lights up the screen with her quirky persona and piercing eyes. There are some quiet scenes with Patel where she takes your breath away. Sheeran qualifies as the real surprise of the movie in a humorous version of the real musician. Poking fun at himself as well as performing, Sheeran fits the bill as the kind of bloke with whom you’d like to share a pint as well as take his advice. When I saw the trailer, I cringed as Kate McKinnon appeared because even her few seconds didn’t ring true. Her overacting as if she’s in a Saturday Night Live sketch threatens to ruin the movie, but fortunately, her character only has a few scenes and can’t be taken seriously anyway. Casting is everything, and as much as Boyle hit the target with Patel, James and Sheeran, McKinnon distracts rather than melting into her role.

The Beatles produced so many hits that it would be a waste of time to try to cover them all in a film like this. Fortunately, the filmmakers focus on less than 20 songs from “The Long and Winding Road” to “Let It Be.” More importantly, the songs blend with the story in important ways and perhaps inspire a new appreciation for their lyrics. Jack performs “Back in the U.S.S.R.” in Russia because he thinks it’s appropriate, while he struggles with remembering the lyrics to tunes like “Eleanor Rigby.” Fans of the band will enjoy how they infuse the movie with their work and influence as channeled through Jack. Lyrics even creep into the dialogue as when Jack thinks about giving up his music career and remarks that he and Ellie have reached “the end of our long and winding road.” As overwhelming as the songs of The Beatles may be to the film, musician Daniel Pemberton manages to do some interesting things with the soundtrack by timing his score to the beats of the story and reinforcing the rhythms deep within Jack.

Curtiss equally delivers both the aching romance of Jack and Ellie and the comedy side of the romantic comedy formula. Simple laughs come from people’s reactions to Jack’s “The Summer Song” and Jack commenting on the teeth knocked out in his accident. Meera Syal and Sanjeev Bhaskar play Jack’s parents, and every time they appear, they bring the humor whether it’s as fawning parents in the crowd or a slapstick kitchen scene with Jack’s father and Sheeran. Jack can’t catch a break, and even when he’s introducing a new song to friends and family, it turns into a farce with the constant interruptions. Curtiss smartly tweaks the premise in ways that I never expected, so some surprises are in store. Sure, there are some plot holes that follow. How can a band like Coldplay exist if you never had The Beatles? Yesterday doesn’t get that deep, so you have to buckle up and punch your ticket to ride if there’s any chance of you enjoying it.

Marvel Comics publishes a series called What If that explores in each stand-alone issue what might happen if certain events took place or characters went down a different path. Yesterday plays like a film version of one of those comic books and hooked me from the start. There were a dozen times where the entire thing could fall apart, but the filmmakers kept adding new layers that built to a conclusion that I didn’t expect. Although I grew up in the musical shadow of everything that The Beatles accomplished, I definitely heard and appreciated their songs in a timeline where they exist. I’m happy to also live in a universe with Yesterday as a loving tribute to the band and their ripple effects around the world. 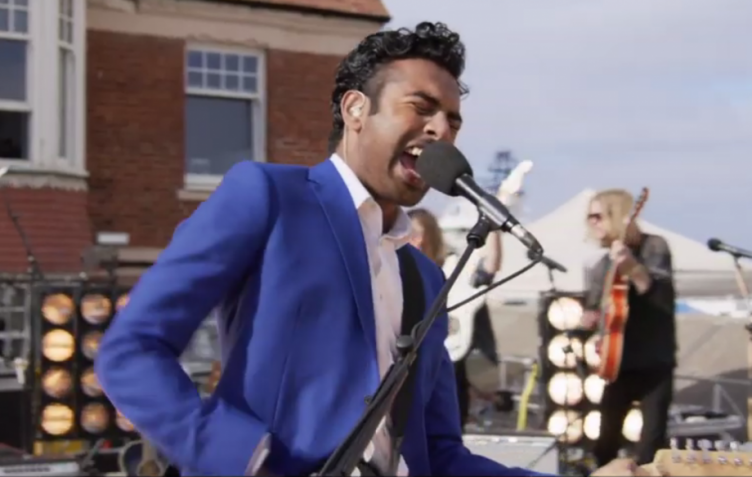