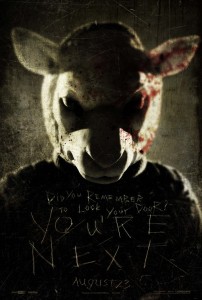 A family reunion in a remote wooded home goes totally wrong when the group falls prey to a trio of masked intruders intent on killing them all in the horror film You’re Next.

Out in the deep woods, a couple are brutally murdered in their upscale vacation home, and no one is around to notice. The killers dress in black and wear white animal masks, but what’s their motive? Is it just mindless execution or the beginning of a series of planned attacks?

Along come the Davisons, who notice their neighbor’s car in the driveway while sharing a bit of gossip about the teacher-owner and his new student-girlfriend. They drive on to their own wooded retreat just up the road. The house has been closed up for a while, so they’ll need to get it ready for the impending arrival of their own grown children and their current partners for a reunion that’s been a long time coming. When they arrive, Aubrey (Barbara Crampton), the mother, is sure someone is in the house that shouldn’t be. She hears footsteps upstairs while her husband Paul (Rob Moran) is down in the basement. Uh oh.

From here on in, the story is your typical slasher film. The family all arrive and sit down for dinner, and then the attackers pounce. The twist in this film is that there’s one guest in the house who’s uniquely skilled at handling the chaos, and that’s Erin (Sharni Vinson), the new girlfriend of one of the sons.

The first scenes of the film had me squirming in my seat. I sat alone in a dark, empty, 300-seat theater late at night with just the haunting score and striking visuals to work on my psyche. I found myself having to turn around just to be sure no one was behind me. Then the plot started to unfold, and the tension vanished without a trace like rain on a cloudless day.

Never have I been less scared watching a “horror” film than this. My biggest fear was that my pen wouldn’t survive the experience for all the work it endured in recording the ridiculous elements unfolding on screen.

First, there are all the random instances of perfection that underscore a badly-thought-out script. The killers have quietly strung a sharp wire outside the front door that’s conveniently set to the exact height of the neck of the next person to run out the door. How lucky was that? Of course, when another character enters an indiscriminate room, it’s just got to be the one concealing a hidden killer.

Then there’s the lineup of endlessly stupid decisions made by the characters. In one example, a major character is killed off in a bedroom, and their blood is used to scrawl “You’re Next” on the wall. Everyone, hearing the screams, runs into the room, sees the bloodbath and then calmly covers the victim with a blanket before nonchalantly returning downstairs. Never once does anyone mention that the killer must be in the house. Later, another character returns to the very room on their own and is surprised to find they’re not alone. Really?

Scene after scene, the two sides wage a vicious battle over who will emerge as the most simple minded. In this battle, everyone loses, including the audience. I could go on for pages, but why?

The one bright spot in the entire film is Vinson, who shows she has real screen presence and deserves a better vehicle for her next role.

As for this film, the end couldn’t possibly come soon enough. The only real casualties were my own brain cells that I could swear were committing suicide with each passing minute. You’re next.