The news is filled with lots of stories about the 100-year anniversary of the loss of the Titanic. I’ve been a Titanic buff for many years now absorbing most everything available surrounding the tragic story. Of course that includes seeing the 1997 film.

For many of those interested in the historical aspects the film represented something different. It represented an opportunity to “see” the events done, more or less, accurately in full color with cutting-edge effects and excellent characterizations.

While the film’s success at the box office is unquestionable there are many who ridicule the film as sappy, ridiculous, historically flawed and worse.

I, for one, am a devotee of what director James Cameron accomplished with the effort and it’s an effort that shows. Within reason Cameron recreated the events of that fateful voyage with much care and a level of detail not previously possible and with a dignity none of us knew Cameron was capable of given his other projects. Also, don’t forget that the film was widely regarded—before its release—as one of the biggest disasters since, well, the Titanic itself. 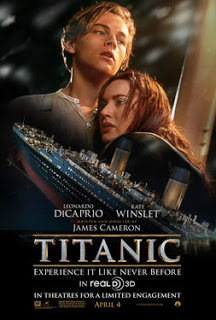 Is it a perfect film? Far from it. As a romance it’s a bit sappy but I’m okay with a sappy love story now and again if it’s able to win me over and the casting made that possible. Kate Winslet as Rose was a great choice. She’s radiant in nearly every scene. The camera simply loves her in this film. Leonardo DiCaprio is much-maligned but he pulls off the character of Jack in ways I don’t feel others could. There are just so many different images that resonate as few romances do (consummation in the back of the car, the “flying” scene, the tender looks and heat of the drawing scene and even the spitting sequence).

In casting there are also some missteps. Billy Zane as Rose’s fiance never seemed right to me nor that of the actor playing his valet. Both just take me out of the story as rude interlopers in an otherwise effective vehicle. The entire gun-wielding chase scene is, in my view, a disaster that should have been left on the cutting room floor. It just doesn’t belong in this film and is one of the chief scenes referenced by those critical of the film.

As for historical accuracy this is where my main interest was focused and here the film delivers. Remember that for many the concept of a movie is to be immersed in its story—to have it transport you there and surround you in its effect. I’ve seen the other movie efforts and, sadly, the technical and financial limitations of the day and those films simply cannot deliver a true escape. So much imagination is required to suspend disbelief that you might as well just stick to books. The 1997 film has a huge leg up there and Cameron did a commendable job taking a Hollywood film and keeping it grounded in enough historical fact to impress.

There are some who demand 100% accuracy and, failing that, call the entire project into question. USA Today recently covered one such site that found countless errors in the film. The reference was so popular that the site is now down due to running over its bandwidth limit. Nearly all the entries were extremely trivial in nature. The site creator points out that a scene where we see the propellers spinning up is wrong because the main propeller (of 3) would have trailed the other two instead of all three starting at once. He takes issue with the recreated Titanic set for not being a perfect match to that of the original ship (should Cameron have literally re-built the entire ship?) He laments wrong shadows, lighting, cloud cover, the size of a bed and such. Only rarely is there something in his list where you think more care should have been taken. For example, the true-life character of “Molly” Brown played by Kathy Bates is introduced to us by the older Rose as “Margaret Brown, but we all just called her Molly.” That’s not correct as the nickname Molly only came about in the 1960’s as part of a famous Broadway musical called, The Unsinkable Molly Brown. I think they just liked the sound of Molly more than Maggie, which is what friends actually called her.

All of those things miss the bigger point—the film’s ability to drive home the enormity of the events in every way. Almost no one else will miss the power and emotional draw because one propeller started up incorrectly on film. No other film has succeeded in drenching the viewer with the aura of the time, the ship, the politics, the impact. Seeing the stern rise out of the water in full 3D (which is how we saw this latest release) is just jaw-dropping. Seeing it again crash down upon countless souls beneath it makes everyone wince. The 3D here was not as evident as I expected but it was subtle and effective.

Even in the less technical areas the film is noteworthy. “Minor” background scenes shot to match known history (like a boy spinning a top on deck much like the last known deck photo) and the cinematography, the stars, the coldness of the water, the dolphins swimming ahead of the boat. They’re all just small details that add up into a larger success and that’s why I spent the time to see Titanic yet again. If you cannot enjoy all these achievements because you don’t like the love story or because the wallpaper is the wrong pattern then I’m not sure movie-going is your thing.