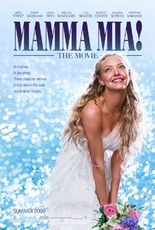 On Labor Day I saw Mamma Mia again. This time for a sing-along version. The hilarious part of this was that it seemed quite evident that no one else in the theater was aware that this was a special sing-along version. The fact that all the words to the songs were at the bottom of the screen with changing coloring to denote when to sing them seemed entirely lost on everyone. We were singing but no one else was. In fact, the couple directly to our right kept looking around the theater to see if anyone else was singing and then got up and moved. Their loss.

At the end of the movie I turned around and asked the whole theater, “Okay, how many of you had no idea this was the sing-along version of the movie?” Nearly everyone admitted they had no clue. It seemed to explain a lot to them. I asked one couple what they thought the lyrics on the screen were all about. They said, “We thought they were subtitles.” Subtitles. English text for an English film…. Okay.

We all had a blast regardless. This, I think, remains my favorite movie so far this year. It’s far from perfect but it’s just such a feel-good time for everyone.