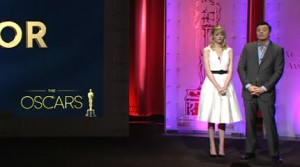 This morning Seth McFarlane and Emma Stone announced the nominees for this year’s Oscar ceremony.

This year’s list, like so many before it, snubs some movies and talent and includes others than have no business being here.

It’s amazing to me that virtually no one is mentioning DeNiro any longer. When did that happen? For me, this comes down to Jones vs. Waltz and while I think Jones may win it, I believe Waltz did the better job. Would voters be willing to pick Waltz yet again for another role from Quentin Tarantino?

Anne Hathaway has this locked up. However, Helen Hunt made The Sessions. Without her the movie’s a bust. Sally Field doesn’t even belong on the list. I love Field but this role was totally a bore.

Day-Lewis has had this one nailed for quite some time. However, I hear Phoenix is great (I haven’t seen The Master) and Washington was terrific. The upset could be Jackman. I’ll stick with Day Lewis.

So, this is probably the toughest category and has a slew of challenges. There’s just no way they’re going to give the award to Riva. No one has any idea who she is. It seems highly unlikely that Chastain or Lawrence would get it. They’re just too pop culture-laden right now. That leaves Watts and Wallis. Neither would be there for me as Watts spends half the movie in bed and Wallis (then 6) was simply too young to know what she was really doing. I’m going to go with Watts who’s due.

Russell has no shot even though the film is in every category. Spielberg is getting some mention but Lincoln just wasn’t that impressive. I wouldn’t be surprised if Zeitlin gets it but Ang Lee deserves it. Life of Pi must have been a real bear (or tiger) to shoot.

I’m most disappointed by this list. I can see Lincoln, Les Miserables and Life Of Pi taking it and I’ll go with the latter.

I’ll skip past the snubs for Best Film and wait instead until I unveil my own list in my yearly roundup in the next few weeks.