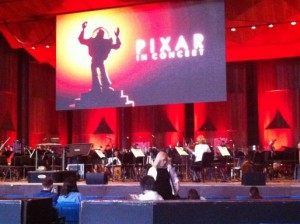 Summer is perfect for all kinds of events outdoors under the stars. Some cities show movies in public spaces, especially calling to mind drive-in theaters. Other cities have open arenas for concerts, and Philadelphia is lucky enough to have two such places. How great would it be to combine music and movies in one event? Pixar in Concert achieves exactly that, and the program passed through Philly recently on June 27, 2013, at the Mann Center for the Performing Arts with the Pittsburgh Symphony Orchestra performing musical selections from all 13 Pixar feature films except the too-new Monsters University. The program is on tour through at least 2014 in cities all over the world with orchestras just as varied. It was a wonderful concert full of emotional moments from the films’ scores and some of the best scenes from the movies playing on a giant video screen above the musicians.

Music is essential to Pixar films. I can’t imagine movies like Toy Story or The Incredibles without some of the iconic songs and themes that add to the experience. Of the 13 released movies, the Newman cousins — Randy Newman and Thomas Newman — are responsible for 8 of the scores. Randy Newman provided music for Toy Story (1995); A Bug’s Life (1998); Toy Story 2 (1999); Monsters, Inc. (2001); Cars (2006); and Toy Story 3 (2010). Thomas Newman composed for Finding Nemo (2003) and WALL-E (2008). Michael Giacchino is second to the Newmans with Pixar music, and his films scored are The Incredibles (2004), Ratatouille (2007), Up (2009) and Cars 2 (2011). Patrick Doyle supplied the music for Brave (2012), which many people confuse with more traditional Disney animated films as opposed to the Pixar projects. Just for the record, Randy Newman also scored Monsters University and filled it with lots of college marching band music.

Resident Conductor Lawrence Loh led the orchestra through the night’s filmic journey. I’m thankful that they didn’t just perform the vignettes in chronological order. That would be too much like taking a trip through time. Instead, the selections jumped around through Pixar history while still keeping the pieces for the Toy Story and Cars movies in order to provide a bit of a story arc. I have seen orchestras perform classical programs as well as pop and themed nights. From the joyous — also perhaps surprised — reactions of the musicians to the audiences’ enthusiasm, it looks like they have more fun with popular music because the audiences tend to span a larger age range and really know the music inside and out. That is certainly true with Pixar’s music because families go to these films and then watch them over and over again at home. 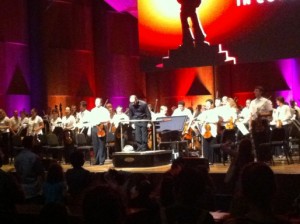 Conductor Lawrence Loh takes a bow after the performance of Pixar in Concert by the Pittsburgh Symphony Orchestra.

The set list below provides the exact order of the selections. Each combination of music and animated scenes either summarized the movie’s overall plot in a few minutes or concentrated on one segment from it. I liked that variety because it wasn’t as staid as regurgitating snippets of the score to give a highlights reel of the best parts of the movie. Instead, the pieces captured the essence of each film in rather unexpected ways as well as meshing audio and video for the iconic scenes. For example, the opening selection for Toy Story focused on the friendship of Woody and Buzz Lightyear throughout the movie instead of trying to include all of the other toys or hitting every plot point. Sure, there was a scene with the green Aliens and the giant claw, but the bromance took center stage. In contrast, the selection for Toy Story 2 introduced some of the new characters from that film and then spent the rest of the segment on the scene in which Woody gets repaired by an old man who also sadly paints over Andy’s name on his boot.

My favorite segments of the night were those for The Incredibles and Up. The jaunty spy music and wonderful choice of scenes from The Incredibles were a nice boost after the brief intermission. I only wish the rumored sequel to The Incredibles had been finished before this concert because Giacchino’s use of musical punctuation as in classic TV spy shows really suits the perfect timing of the music with the video. If you’ve never seen Up, you missed out on one of the most beautiful, touching segments in the history of animation. I don’t say that lightly. There’s a four-minute, wordless bit referred to as “Married Life” that shows the entire relationship of main character Carl Fredricksen with his wife Ellie from childhood through their marriage. It always chokes me up, and because music is the only “dialogue” of the sequence, it has even greater impact in this orchestral setting.

All of the advertising for the concert showed Buzz Lightyear conducting at a podium. Although it would have been really neat to have costumed characters at the show, Loh made for a wonderful, enthusiastic substitute for Buzz. It was sadly a rainy night that caused the cancellation of the scheduled fireworks. The positive spin on that was that it cooled off the audience and provided a slight breeze. Disney works magic all of the time, but even they’re not as good as providing the fireflies that showed up early in the concert right on cue for the appropriate selections from A Bug’s Life. I was worried that the musical “star” of the show — the song “You’ve Got a Friend in Me” from Toy Story — wouldn’t make an appearance. Rumblings from the audience throughout the show echoed this sentiment. It wasn’t listed in the program’s set list, and it certainly wasn’t featured in the Toy Story segment. Fortunately, the encore put my fears to rest because it was nothing but an extended version of the song with scenes from Toy Story as well as images of the four Pixar composers and lists of their films. Indeed, they were the audience’s best friends for the night, and the 18-year relationship with Pixar film music deserved a night out with the stars under the stars.

ENCORE
“You’ve Got a Friend in Me”