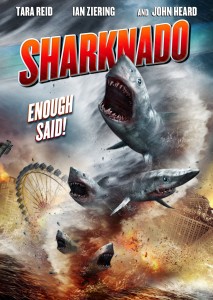 I don’t review or even watch many television movies, but when the hype surrounding such a flick forces its Twitter hashtag to trend worldwide, I take notice. Sharknado debuted on Syfy on July 11, 2013, and immediately gained fans from all over. Its working title was Dark Skies, and I doubt this gem would have gained much attention if it kept that final title. Sharknado is kin with such notable Syfy films as 2011’s Mega Python vs. Gatoroid in which ‘80s pop icons Debbie Gibson and Tiffany brawl in the cheesy monster film’s better showdown. I didn’t expect any better from Sharknado, and I got the silly, stupid fun that the title suggests. Is Sharknado worth the publicity storm that swept across the pop culture landscape? Probably not, but it’s also not going to die so easily with a sequel set in New York City planned for 2014.

Sharknado is a flick from the production house The Asylum. A quick glance at their past films reveals a taste for genre flicks in the realms of sci-fi, fantasy and horror. Director Anthony C. Ferrante and writer Thunder Levin have minor credits on their résumés; I bet Sharknado opens the doors wide open to at least other cheesy Syfy fare. Sharknado is a perfect storm of ridiculous premise, bad acting and over-the-top death scenes. In other words, gather some beer and friends and enjoy the festivities. Just because I thoroughly enjoyed it doesn’t mean that it’s even a good movie. I just hope that the budget gets bigger and sharks start flying into Wall Street boardrooms.

The stars of Sharknado are Ian Ziering, Tara Reid and John Heard, who at least has some fun with this nonsense. Hurricane David is about to make landfall on Los Angeles, and nobody in the sunny climate is ready for what the hurricane brings with it. A prologue shows sharks attacking a fishing vessel with some nefarious money deal going down below decks. It’s no matter; they’re all shark sandwiches in a few minutes anyway. Finley “Fin” Shepard (Ziering) — I did not make up this name — owns a bar on the Santa Monica Pier and likes to surf with his buddy Baz Hogan (Jaason Simmons). When the skies turn dark and sharks attack the surfers and others on the beach, Fin and Baz retreat to the bar where googly-eyed barmaid Nova Clarke (Cassie Scerbo) has a thing for her boss and bar regular and friendly drunk George (Heard) likes any female within groping distance. An example of the unnecessary plot holes is that Nova doesn’t even realize that Fin has an ex-wife, daughter or son. Nova also has a scar that’s never explained, but we can assume was a bite from a shark admirer — not George.

When the sharks start falling from the sky and the storm tears up the pier, Fin, Baz, Nova and George (along with his favorite bar stool) head inland to make sure that Fin’s ex, April Wexler (Reid), and kids are OK. Daughter Claudia (Aubrey Peeples) is more concerned with her snotty, rich boyfriend Colin (Christopher Wolfe), but if there was ever anyone set up to be shark bait, it’s Colin. I’m still not sure how sharks managed to make their way up a steep hill to April’s house, but you don’t need “logic” to spell Sharknado. The group heads over to an airport in Van Nuys where Fin and April’s son Matt (Chuck Hittinger) is in flight school and somehow figures out how to stop the sharks and the three “sharknadoes” that are spinning in the air nearby. 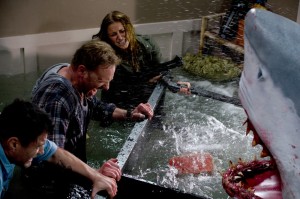 Don’t expect great acting here. It’s about the same level as the plot. Ziering makes a good enough hero. I just don’t understand why his voice sounds like it has been affected by helium or has not gone through puberty. I’ll blame bad dubbing. Reid hasn’t done a whole lot since the American Pie movies put her on the map. She just looks very annoyed here with her brow permanently lined. I thought that Sumiko Braun would have a more prominent role as she flirted with Fin on the beach in the first scenes and stuffed herself into a wet suit. Alas, she was just a featured extra more than anything else. The real surprise is Robbie Rist’s appearance as a school bus driver. Rist gained permanent pop culture celebrity as Brady family cousin Oliver in The Brady Bunch. I only knew that he was in this film by looking at a cast list. His character wanted to be an actor ages ago and utters this prophetic line: “My mom always told me Hollywood would kill me.”

The special effects are quite bad at times with a terrible mix of animated sharks and real-world elements as well as stilted scenes of vehicles moving near water. I would have expected that they’d at least get the sharks right and somewhat realistic. Instead, the digital sharks look like something a computer graphics class would animate. The better, more convincing elements are the weather effects. It has never rained so hard in Southern California, but the filmmakers produce a believable storm. The death scenes are much more memorable. With sharks everywhere — sea, sky and land — you never know where an attack will happen. Nova uses a pool stick to great effect, and George wields his bar stool when some sharks act up. Two death scenes stand out in their magnitude of silliness and creative use of structures; I think you can spot them a mile away, so I won’t ruin them for you here.

The tongue-in-cheek humor and over-the-top insanity are what make Sharknado so watchable and enjoyable. When Nova utters, “We’re gonna need a bigger chopper,” it’s the perfect line for the situation and a nod to Jaws. You don’t see “The End” before the end credits but “Fin” instead. That silliness stays constant from the opening scene to the finale. This is one of those movies that pass my “Alice Cooper criteria” even though it’s not great when you compare it to others. I once heard Cooper explain how there’s always something in a movie that’s new and exciting no matter how bad the movie. He used, ironically, Jaws 2 as his example with it being the first time he ever saw a shark take out a helicopter. There are plenty of new and/or exciting things in Sharknado to merit a look. I can’t wait until the sharks take Manhattan!