Okay, I’m not sure how this is going to come off especially so close to my other questionable post about Dunkin Donuts but here goes…..

Martin Scorsese is set to bring to the screen a biopic of Frank Sinatra. This effort has the full backing of the Sinatra family and, because of that, is supposed to be a very honest look at the superstar. I’m left to wonder how truly honest the family is willing to go and what sort of limits they’d put on their support in this. The idea that their support lends depth seems a bit backwards to me.

Anyway, the big news on this is, as expected, who will play Frank Sinatra? The early favorite seemed to be Leonardo DiCaprio given his close relationship and past history with Scorsese. I’m not sure Leo can sing but it’d be hard for anyone to do Sinatra justice. 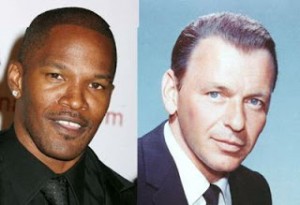 The surprise is that, as of right now, the leading candidate for playing Sinatra is none other than Jamie Foxx. Foxx did an amazing job, and won the Oscar, for playing Ray Charles in the biopic on him entitled simply Ray.

The news posts on this all cover it with kid gloves calling it, at most, a surprising choice. People, Jamie Foxx is black. Frank Sinatra was white. End of story. Can you imagine the uproar if, in Steven Spielberg‘s upcoming biopic on Martin Luther King, the lead was being given to a white actor? The only thing that would get an even bigger negative response would be a white actor in face paint. It was funny in a comedy like Robert Downey Jr playing a black character in Tropic Thunder. Not so much here.

The picture above was posted with a note talking about the uncanny resemblance the two have. Are you kidding me? Yes, they are both men. After that it gets a bit sketchy. Has anyone bothered to remember that Sinatra is also known as “Old Blue Eyes”? Are we supposed to watch Foxx with scary, distracting light blue eyes that don’t fit his face too? Come on.

I have absolutely nothing against Jamie Foxx. He seems like a decent enough fellow and can really act. However, I don’t know too many people that can act so well that you forget their skin color when it doesn’t match that of the person being portrayed.

For me this is just another case of trying to drum up interest by doing something shocking. Now the PC crowd is left to say, “Oh, sure. That’s great!”

Sorry, no. Not me. I appreciate it when those in casting for these biographic movies try to find someone that actually can resemble the main character. Casting Foxx would be an “interesting” choice. It would also be the wrong one because there just isn’t any valid reason for doing it other than to raise eyebrows.