It has been a terrible winter all across the country, and we were really pounded hard in the Philadelphia area in February. It was a treat to be able to get out of the house on a Saturday night in between snowstorms to go to a concert. This wasn’t just any concert, but it was a reunion once again — perhaps they’ll be on an annual schedule now? — of Philly stalwarts The A’s. The Ardmore Music Hall has gone through many transformations over the years, so it was a perfect site for The A’s to show the dedicated audience who arrived in throngs despite the weather that they still have plenty of life and years to go. The date was February 15, 2014, but on this Valentine’s weekend, all of the love was directed to The A’s by an audience excited by a strong performance to even rival the band’s heyday.

The A’s got their start back in the ‘70s performing covers of punk and rock songs before writing their own original material and switching the focus of their shows to original songs. This concert had almost the exact same lineup of the band’s songs as last year’s show at Underground Arts. What made this show extra special were the cover songs in a special preshow set for VIP ticket holders and a second encore that was nothing but covers, including the ever-popular “Secret Agent Man” and “Batman Theme” that were frequent covers back in the day. I loved hearing “I Ain’t Superstitious” twice, and my favorite was “Money (That’s What I Want).” I pulled out a dollar to hand to lead singer Richard Bush and fulfill the request in the lyrics, but he was bounding all over the place like a super ball and didn’t come back near me during the song.

One of the last DJs standing on Philly radio is beloved WMMR on-air personality Pierre Robert. He’s the go-to guy when it comes to introducing bands in this town, so it was only appropriate that he performed these hosting duties in Ardmore, PA. The band was tight in both main sets and the encores, and other than a wardrobe change in the short intermission between main sets, they played nonstop for over two hours. I’m sure that they fed off some of the energy of the audience, but they had plenty of their own to keep them going.

Bush has always been one of my favorite lead singers, and he played along with the audience as well as found himself all over the stage, including lying on the floor on more than one occasion to the delight of the other band members. In the second set, he wore a sweatshirt from the Bensalem High School Owls. (I found this particularly amusing because the letter “B” is right next to the word “Owls” so that it looks like the team is the Bensalem Bowls.) Anyway, I would imagine that it was hard for the band members to pay attention to playing their instruments with so many familiar faces that they acknowledged in the crowd. Guitarist Rick DiFonzo had a steady hand as he delivered the riffs and familiar parts of those A’s numbers and cover songs, and he had that perpetual grin on his face during much of the show. Keyboardist Rocco Notte kept his head buried in his playing, but he broke out a guitar and came more to life on a couple of tracks, including “Bopalena.” Bassist Terry Bortman and drummer Michael “Mikey” Snyder seemed to be having the most fun of all as they kept the beat and scanned the audience to smile and nod at those slightly older fans who packed the show. Bortman and DiFonzo provided the backing vocals as always, and they often had to step over Bush in the process. 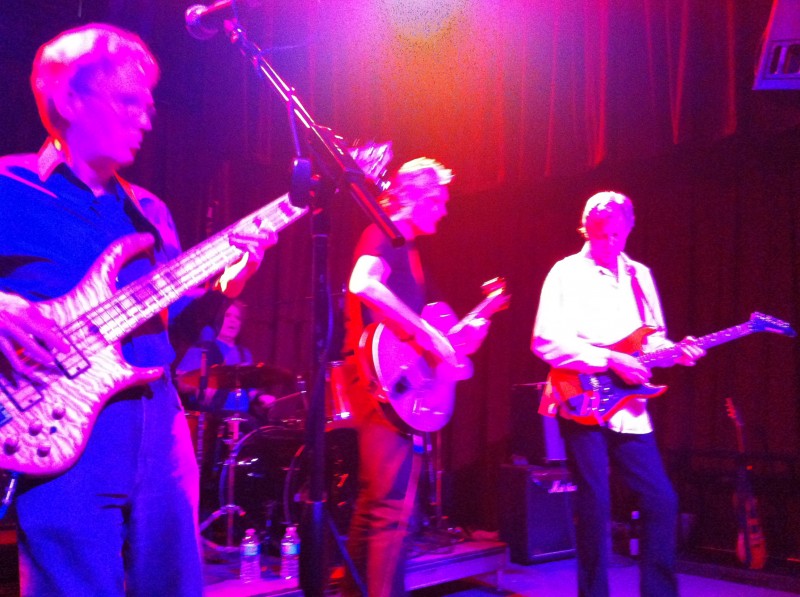 The sets covered the gamut of the career of The A’s, including tracks from The A’s, A Woman’s Got the Power and the Four Dances EP. From the opening “Johnny Silent,” the band kept the numbers coming at a pace that the audience loved. I was stationed at the front of the stage, so I didn’t realize how packed the club was until I left the show. I would say that it was a bigger audience than last year’s show, which perhaps grew to match the size of the new venue. The audience sang along to every song and knew those lyrics inside and out, from crowd favorites like “Words” and “A Woman’s Got the Power” to deeper tracks like “Nothing Wrong with Falling in Love” and “Teenage Jerk Off.” DiFonzo introduced “Electricity” by acknowledging those no longer with us, and that was an appropriate sentiment given how many fans were lost over the years. I raised my eyes for a second in thought of my brother, rock photographer Phil Ceccola, who never missed a show and dragged his little brother to many of them, including a memorable trek through the woods and service roads surrounding Six Flags Great Adventure, then just known as Great Adventure, for a show in their small indoor arena.

I’ve noticed that going to shows by The A’s is like visiting family. A double bill with The Hooters on Thanksgiving weekend in 2007 might have glommed on to holiday spirit, but I had that same feeling at last year’s show and in Ardmore. The faces in the audience were familiar to me even if I didn’t know the names connected to them, and those whom I did know were welcoming and warm. The band had various family members in attendance, including Snyder’s daughter and Bush’s father, who looks more like an older brother and may explain where Bush gets his energy and good genes. You never know what you’re going to see at a live show, and I caught one moment in which Bush’s lovely significant other put her hand gently on his head as he was lying against a monitor on the stage. Love was most certainly in the air, and you just had to listen to the manic energy of the audience as they sang along with “After Last Night” to notice it. Bush slowed them down before the band finished the live extended version of their iconic hit song. 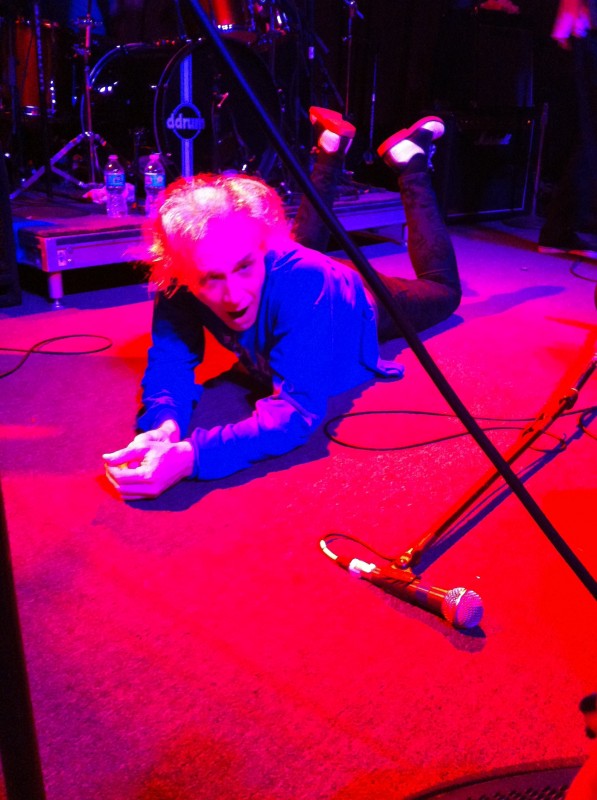 When I wrote about last year’s show, I didn’t think that I’d be writing again so soon. The fans will take whatever doses of The A’s that they’re willing to deliver. I hope that I’m still here next year and writing another concert review. As you can tell, I was a bit of a procrastinator with this belated review. The timing worked out because I can now point you to a documentary video of the recording of “A Woman’s Got the Power” by Patty Smyth as part of Hooters drummer David Uosikkinen’s In the Pocket project. It features some vintage shots of The A’s taken by my brother that I unearthed for director Steve Acito when he was working on the video. Today is also coincidentally the date for a CD/DVD signing in Philadelphia by The A’s of the recordings of their Underground Arts show. I already have the DVD, and the quality is quite good. I’ll listen to that CD tonight just as soon as I pick it up. DiFonzo is also selling them through his Nukefizz Web site. Wouldn’t you know that there’s going to be another snowstorm in the area on Monday!? I’ll implore the band tonight to make their next reunion show in the spring or summer. Until then, my memories of this winter will include great shows like this one.

VIP set
1. Tighten Up (cover of Archie Bell & The Drells)
2. Stop! In the Name of Love (cover of The Supremes)
3. I Ain’t Superstitious (cover of Howlin’ Wolf)
4. Slow Down (cover of Larry Williams by way of The Beatles)

Set 1
1. Johnny Silent
2. Who’s Gonna Save the World
3. Grounded/Twist and Shout Interpolation
4. Nothing Wrong with Falling in Love
5. How Do You Live
6. Painting by Numbers
7. Parasite
8. Misunderstanding
9. Words
10. 5 Minutes in a Hero’s Life

Encore 2
1. Secret Agent Man (cover of Johnny Rivers)
2. I Ain’t Superstitious (cover of Howlin’ Wolf)
3. Money (That’s What I Want) (cover of Barrett Strong by way of The Beatles)
4. Batman Theme (cover of Neil Hefti)
5. The Last Time (cover of The Rolling Stones)