During the Golden Globe awards (this year’s event was one of the few times I’ve actually watched them) I noticed several mentions (and nominations) for a PBS show I hadn’t heard of before called Downton Abbey. It immediately evoked bad memories of some other English-type films I’ve seen that I absolutely despised for their incredible depth of complete boredom.

However, I kept hearing good things from some reliable sources and then noticed that the first season (just seven episodes which is quite typical for British shows) is available in HD on Netflix. I decided to give one episode a chance. I’m so glad I did as this is one of the very best TV shows I’ve ever experienced and an experience is what it is. 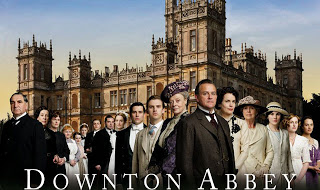 The acting is flat-out tremendous which is not a big surprise given some of the major players here. The most famous is Maggie Smith playing the grandmother and she’s absolutely terrific. Her daughter-in-law is played by an old favorite of mine—Elizabeth McGovern (who still looks great at 50).

The basic story takes place at an old English estate called, obviously, Downton Abbey. The year is 1912 and the first episode coincides with the sinking of the Titanic which claims two key family members causing a potential financial catastrophe for the main family of the house—the Crawley’s. Don’t get too concerned about the year as we move from 1912 to 1914 by the end of the first season (again, just seven episodes). Watching back-to-back in Netflix is ever so slightly disconcerting as characters freshly introduced are suddenly acting as if they’ve been there for years (and have been according to the plot).

The core story involves us in the lives of not only the Crawley family but, even more so, the house staff of the estate including butlers, valets, cooks, maids, helpers and much more. Each one plays a critical role in both the upkeep of the estate and the forward momentum of the plot.

The writing is the best I’ve encountered and has caused me to literally sit on the edge of my seat at one turn then clapping loudly at another and then smiling so broadly at another that my jaw gets tired. The stories are simply riveting and the dialogue is second-to-none. This show has it all with regard to characterizations. We have Smith playing the perfect turn of the century Matriarch continually obsessed with protocol and her place in the hierarchy. Every hint of an utterance from her character will perk up your interest as she has some of the best quotes ever to grace a script. McGovern, as the ever-watchful mother, is laser-focused on getting her three daughters prepared for a “proper” marriage. The show also boasts some of the most despicable characters in two of the staff and some genuine angelic-types that I defy anyone to not be enchanted by. You can’t help but to become immersed in the inner workings of each and every character. 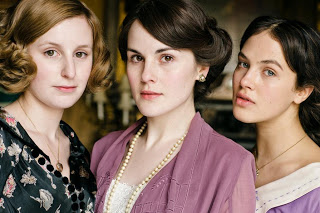 While I suspect the show isn’t for everyone it probably would impress most people. Remember, I am not the type to go in for the typical bland, plodding British movies and shows where very little seems to happen. The two worst examples of this were Gosford Park and The Remains Of The Day. This has similarities but only good ones. Everything else about it is entirely unlike those two painful films. The biggest problem with the series is that, in typical British TV fashion, it’s over far too quickly. The second season is under way on PBS but now I’ve missed a few episodes and there’s no telling when, or even if, Netflix will get more.The oldest of the three daughters, Mary, is part of the new age and is tired of constantly having to act as a catch for every acceptable male suitor that steps through the door. She yearns to be free but also understands the weight she carries for the family’s future success. The middle daughter, Emily, is the forgotten, plain daughter and then there’s the youngest daughter, Sybil, who’s the wild stallion of the family. The actress that plays her, Jessica Brown Findlay, is quite stunning. She reminds me of a very classy version of Angelina Jolie and Scarlett Johansson mixed into one. It seems quite clear that the producers purposely downplay her attractiveness as it only becomes obvious much later in the series.