You can pretty much say I grew up with Star Trek. We watched the original series in my house on a black and white 13″ Zenith TV that we thought was all anyone needed. It was the same TV I sleepily watched while Neil Armstrong took the first steps on the actual moon. Later came a 19″ Philco color set that took several people to move. It was, without a doubt, best thought of as a piece of furniture. My father and I were the main audience in our house. My brother was too young (and I was actually watching it in re-runs though I had no idea and couldn’t care less anyway. It was wonderful. Most of the plot flew over my head at warp speed but the fascination was still enough to envelop me in its aura. 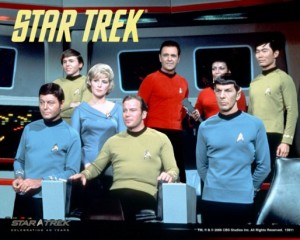 Then, in 1973 the animated series debuted when I was the ripe old age of 9. My friends and I blocked out its Saturday morning time slot with the same reliability that devout Catholics show for Sunday mass. I like to tell myself that the plots were more approachable but, thinking back, I simply think the delivery method — animation — was the deciding factor.

It was with a heavy heart that we found out that there’d be no more Star Trek. We only found out when it wasn’t on in 1975. It’s not like we had the Internet to find out about its cancellation. Like the disappearance of a crew member from the transporter, it just disappeared one Saturday and was lost in space. Years went by. Skits on Saturday Night Live parodied the original series beautifully. Inferior wanna-be series came and went like Buck Rogers in the 25th Century, Space: 1999 and an interesting but ultimately flawed series called Battlestar Galactica.

Finally, in late 1979 a very unexpected Christmas present materialized in the form of Star Trek: The Motion Picture. It included all the main original cast. Most notably it boasted stunning effects and production values the original TV show could never match. I loved every minute of it. Spoiler Alert: If you haven’t seen the film and don’t want to know the ending, skip to the next paragraph now. I’d followed NASA closely and wrote about the Voyager probes in school. Imagine my shock when I realized, moments before the big reveal, that the main antagonist was tied to actual history! Incredible. It took several years before I started identifying glaring issues with the film but that’s another story and still doesn’t dull the original emotion.

As the years went on other films followed. Then, in 1986 we found out that a new TV series was underway  By this time I had technology to thank for the early warning. We still didn’t have the Internet but we did have online forums and Star Trek was a major draw. In the fall of 1987 it premiered and left me confused. It didn’t instantly captivate me as I expected. The main captain was this English guy who looked much older than he was and who played geeky characters in B-movies like the feeble doctor in Lifeforce. It included a Klingon that looked nothing like Klingons and a strange-looking psychic character that looked like she’d been ripped off a gypsy caravan and forced into a bad hairdo. The only redeeming element, it seemed, was a curious android character. Thankfully the writing and production values improved dramatically as the series progressed and Star Trek: The Next Generation became my favorite flavor of the franchise (a situation I shared with countless others as well).

Then, the creator, Gene Roddenberry died and I was sure the magic would die with him. That’s another thing I shared with countless others too. As talk of a new series emerged the press raged on about how its premise went against everything Roddenberry wanted. As a Roddenberry loyalist I was determined to despise the effort which became Star Trek: Deep Space Nine. Even so, I couldn’t help but tune in all the same when it first aired in 1995. It was everything I feared. The actor playing the captain was a better android than Data except that his character was supposed to be human. It had a shape-shifting character I thought of immediately as a cheap cop-out: Hey, he can become anything at any time. How convenient. Plus the actor portraying him (René Auberjonois) I had long since come to despise as an annoying comedic actor. The doctor was a joke who didn’t seem to know how to take a temperature and the women were forgettable. Worse it brought over two of my least favorite characters from The Next Generation. If that wasn’t enough it included a Ferengi as a main draw. I stopped watching after two or three episodes. 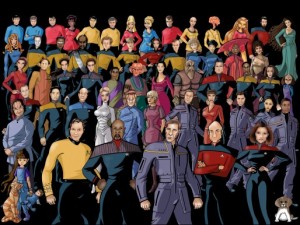 In 1995 we got Star Trek: Voyager and everyone kept it at arms length from the start. Yet, somehow, it just resonated with me. I never liked some of the characters but I felt the holographic doctor was one of the best characters ever created for Star Trek. I found this a bit confounding as that character shared two of the main flaws I had with Odo the shape-shifter from Deep Space Nine: He represented a bit of a cop-out and was played by an actor I’d previously come to dislike. Go figure, right? The scripts, in short order, felt far more like The Next Generation to me and a precious few I consider to be right up there with the very best any of the shows had to offer. One episode involves Voyager becoming trapped in a strange planet’s orbit. The planet spins at incredible speeds causing on its surface to experience time far faster than the rest of the universe.  Generations upon generations of inhabitants would look to the sky at this “new star” and ponder its meaning. Was it a god or an omen? It left me in awe.

Just as Paramount retired Voyager we got Enterprise the prequel to all the previous TV shows. What a disaster. I hated the music (as did everyone it seemed) and the entire cast left me sighing. Then we got the ridiculous plots and the gratuitous suggestive scenes. The Vulcan, played by an actress clearly hired more for her appearance than her skills, couldn’t seem to find enough cloth for a proper uniform. Couple that with plot lines that included the need to strip down and wipe oil on each other to ward off the deadly effects of space travel. It never stood a chance. Oddly, the one thing I did change my mind about was the opening music. Long after it was cancelled I’d find myself humming it or singing it when I’d see the beginning of any other Star Trek series. “It’s been a long road….”

That brings me full circle to the present. I decided it was time to reconsider my verdict on Deep Space Nine. I’m in the midst of its third season and it’s just starting to melt the thick coating of ice. I no longer despise Odo and Chief O’Brien is even growing on me. I still harbor the feeling that we’ll find out Sisko is actually an android and I’ve only truly enjoyed a handful of episodes, but it is growing on me.

Then, this past week we had a friend over who’s never seen any of the Star Trek‘s and was curious about the original series. I’d long since come to regard it as a classic, but a very dated, very campy classic that most people wouldn’t get. The three of us sat there and took the dive. We watched the first and then the second episodes. It was magical. Netflix is now showing it with its new, updated graphics and it’s so much better than I remember. It looks great. After the episodes the friend told me she thought Kirk was incredibly hot and that the show was really good. Whodda thunk it? This one silly show spawned four decades of entertainment in my life and helped foster an absolute fascination in the universe we inhabit. It fostered in me an interested in astronomy, Carl Sagan, NASA, science fiction and, at the core, a love of imagination. Thank you again Mr. Roddenberry and everyone who helped bring this franchise to life.