Previously on The Americans: Philip and Elizabeth Jennings are undercover KGB agents posing as a suburban married American couple with a pre-teen son Henry and a teen-teen daughter Paige. They live across the street from FBI agent Stan, who has no idea they’re KGB and thinks Philip is his best buddy. Elizabeth had an affair with one of her assets, civil rights activist Gregory, around the time when Paige was born. When the show began a few months ago, the Jenningses explored whether their cover marriage could perhaps become a real marriage with love and booty and all the good stuff. That plan went off the rails when Philip ran into Irina, his first love from the motherland, and slept with her and lied about it. Philip and Elizabeth told the kids they were separating and Philip moved out.

Back in spy territory, Philip, as “Clark,” has an ongoing thing with Martha the FBI secretary. FBI agent Creepy Chris, Stan’s partner, was stalking Martha. Creepy Chris confronted “Clark” as he exited Martha’s apartment. This turned into a fight and then a stabbing. Philip kidnapped Agent Creepy Chris and interrogated him to death. Stan kidnapped one of Arkady’s underlings and pressed him for intel on Agent Creepy Chris, and the kid had no idea what Stan was talking about. So Stan whacked him right in the middle of a hamburger, which is rude.

“Only You”: We open the show with a nothing scene of Elizabeth dropping Philip off at his hotel and offering him some sympathetic words about the Creepy Chris snafu. Sometimes you don’t want to kill creepy stalkers, but it happens anyway.

Next we go to FBI headquarters (where the show really should have started). Supervisor Gaad has just notified Creepy Chris’s family of his death. He gives an inspirational speech to the troops and vows revenge. In a sidebar, Martha reminisces fondly to Stan about how his creepy stalker partner refused to take no for an answer, and Stan agrees that that was really sweet and stalking is love. Aw. Gaad calls Stan up and tells him that Chris’s ring is missing, which could give them a lead. For now, Stan should go home and sleep so he’ll be ready to start fresh in the morning.

So naturally Stan goes out and gets hammered and shows up drunk on Philip’s hotel room doorstep right as Philip’s getting out of the shower (fan-fiction writers, start your engines). As Philip puts some clothes on, Stan waxes not-very-poetic about how all crappy hotel beds are the same. It’s not quite as labored as the speech about dogs and soft mouths that we were treated to last week, but it still thinks it’s a lot more clever than it really is. Stan, you’re no Don Draper. Stop speechifying. Then Stan moves on to new topics like Marriage and Secrets and hoo boy, he is drunk. So naturally he figures it’s a good time to drive home. Philip offers to drive him, seeing as how he’s obviously about to slam into a pole, but Stan refuses. On his way out, Stan earnestly thanks Philip for the, seriously, thirty seconds of conversation.

Stan meets with Nina, his hot Russian mole, and asks her who killed Creepy Chris. She doesn’t know, and tells him so. She, in turn, asks him who killed Vlad, Arkady’s underling. He does know (it was him), but he tells her he doesn’t.  One of the best and most realistic things about this show is that each side is convinced that the other is a bunch of masterminds responsible for every bad thing in the world, and everyone on both sides is actually a complete idiot groping around in the dark. Poor dead Vlad was Nina’s friend and wanted to be a doctor. Stan hears this and is remorseful, but seriously, he knew Vlad was a minor functionary when he killed him. You can be a ruthless killer if you want, Stan, but don’t get all sad when someone reminds you that people are people and expect us to feel sorry for you.

It’s breakfast time at the Jennings house, and the most obnoxious daughter in the world is being a jerk to her mom. Elizabeth lays a steely-eyed smackdown on her daughter, but Philip comes in before they can finish their argument. Philip gladhands the kids a bit and then sends them upstairs. He has some spytalk with Elizabeth — Martha told him about the missing ring so now they know that the FBI may be on their trails. Elizabeth asks him to call before he comes over next time, since he disrupted her fight with Paige by swooping in. See, this is why spy partners whose cover identities are married shouldn’t have their cover identities get separated. He had information he needed to get to his partner. How is he going to avoid coming over unexpectedly? He has to tell her when something spytastic happens.

The FBI has found the missing ring. The owner of a salvage yard tried to pawn it. Stan goes over to question the guy, who’s initially cagey for no real reason. I guess the episode must have run two or three minutes short. So Stan roughs him up a bit and he gives up Gregory’s crew as the guys who dropped off the car. He thinks they’re drug dealers. Stan gives him a facebook and the guy fingers Curtis, who Stan immediately remembers as the guy who tailed him during the Philly operation. Jackpot.

Elizabeth calls Gregory and taps the phone three times as a signal to meet. They get together in what looks like a coffee shop or something. She tells him that the FBI is sniffing around about the ring so he should watch out in case they find out his buddies dropped it. She also tells him that she and Philip have separated and he strokes her hair consolingly.

Some SWAT guys do a raid on Curtis’s house and scare a lady who has panties on but no bra. Thanks, FX! Anyway after a brief chase they catch Curtis. He is in for a fate worse than death. Stan is going to speechify at him. This, like Vogon poetry, is an extremely effective interrogation technique in that the subject will do anything to make it stop. Later, we see that a big picture of Gregory is being projected on a wall at the FBI. See? Curtis couldn’t take any more. 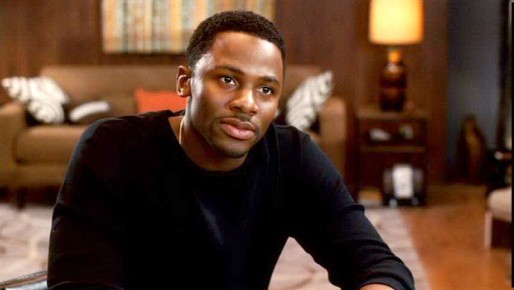 Antwone Fisher takes it on the chin, again.

Granny gets into a car with Philip and Elizabeth and they tell her that the FBI has Curtis. Granny talks about exfiltrating Gregory and setting him up with a nice new life in Moscow. He’ll get a solid stipend and go in and give rah-rah speeches to cadets every once in a while. Elizabeth has faith in Gregory’s devotion to the cause and is certain that he’ll go. Philip is less sure. They all make it clear to each other, though, that if Gregory refuses to go they will have to terminate him. Elizabeth meets with Gregory in her car later and tells him about the exfiltration plan. Gregory wants to get some plastic surgery and a new name and go to LA, not Moscow. You can’t really blame him on that one, but Elizabeth isn’t happy. She knows that’s not going to fly.

Granny meets with Gregory in the safe house in what is by far the best scene of the episode. As they talk, we see the FBI searching Gregory’s house. She tells him that doing anything other than going to Moscow is a nonstarter. “Do you know why I’m the best at my job?” she asks. “I’m a guard dog. I don’t take any chances with the people I protect. That’s why they send me, an old lady, halfway around the world to do this.” Granny tells Gregory they’ve framed him for Creepy Chris’s murder. The FBI will find him no matter where he tries to hide. He takes this pretty calmly — so calmly that he probably knew that LA was a pipe dream all along. “I have never wanted too much, really. I just wanted to live for something,” he tells her. She nods, understanding him completely. “And I’ve done that. And to know when I’m done. Now I’m done.” Damn.

Elizabeth and Gregory have dinner. He tells her how strong she is. Then he looks at her tenderly and asks her not to go back to Philip. He asks her to find someone who will love her. He’s saying goodbye. He knows what’s up. They make out and we cut out just as the clothes come off. Another strong scene.

Elizabeth is getting her stuff together in the morning. So …. Did any adult stay in the Jenningses house last night? Maybe Paige is a brat because her parents are never, ever home and she wants attention. Gregory officially tells Elizabeth that he’s not going to Moscow. Instead he’s going to commit suicide by cop. He goes to leave and Elizabeth pulls a gun on him. He leans into it. She has tears in her eyes. She knows that he’s honorable, but she can’t let him go. Philip walks in and asks Elizabeth to leave as he puts a silencer on his gun. Elizabeth decides that her trust in Gregory is absolute, and that she owes him the death he sees as meaningful. She begs Philip to let Gregory go through with his hail-of-gunfire plan. Philip stands aside and Gregory leaves to go find the bullet with his name on it.

Philip and Elizabeth drive off in their separate cars, but first they exchange sorrowful glances. A haunting cover of “You Don’t Know What It’s Like” plays over scenes of Gregory walking free in the open air wearing a boss plaid coat in his last few moments. Gregory spots the cops and pulls a gun to provoke a shootout. I initially hope he’s aiming away from the cops, since they didn’t really do anything to him, but we see one of them get hit and go sprawling over a patrol car so I guess he’s going for it. He gets hit, again and again, and finally goes down. Elizabeth brings in the mail and breaks down in tears over her kitchen island. Philip watches hockey in his hotel room. Stan has a picture of Gregory lying dead in the street on his desk at work. Gross, Stan.

Next week on The Americans: Some KGB officers are being targeted for assassination, and Mrs. Stan gets mad.