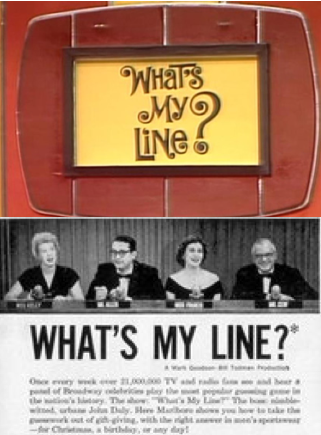 What’s My Line? was a game show that ran from 1950 until 1967 on CBS. It has also been the subject of numerous revivals throughout the years, including a daily syndicated program that lasted from 1968 until 1975. The concept was simple as the celebrity panelists would try to guess the occupation of a guest, based on mostly yes or no questions.

The feature of What’s My Line? that has gotten the most attention now is the appearance of the mystery celebrity. It’s just a lot of fun to see iconic figures who aren’t around anymore go on late night talk shows or make guest star appearances on Saturday Night Live. These clips are rare opportunities to see them outside of the movies or, in some cases, documentaries.

For this part of the program, the panelists all wear blindfolds and try to guess who it could be. In many cases, the guest must disguise his or her voice. 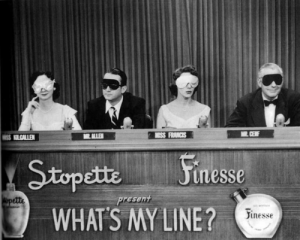 Yul Brynner‘s performance is memorable for the way in which he manages to hide his deep distinctive voice.

War hero and action movie star Audie Murphy is also a fascinating figure. I’m familiar with him mainly due to an article in Cracked, but a film about his exploits in World War II in which he played himself was Universal‘s top-grossing film for 20 years. In contrast to the usual way films are adapted from memoirs, Murphy asked the writers to tone down the violence and the action because, otherwise, it may make war appear too glamorous. He isn’t as universally well known now although he has another major distinction: His grave is the second most visited in Arlington, behind that of President John F. Kennedy.

Part of the fun of these clips is seeing people who later went on to become famous. For example, Colonel Sanders.

Jimmy Carter made an appearance in the syndicated revival back when he was the little-known Governor of Georgia. One of the guests assumed that, because he provided a service to women, he must be in the fashion industry.

What’s My Line? resulted in a knock-off series called  I’ve Got a Secret. In 1956, an elderly man appeared on the show with a rather memorable distinction: He was the last surviving witness to the assassination of Abraham Lincoln. That really exemplifies the time-capsule appeal of these programs, which sometimes features footage of people you wouldn’t expect to ever see alive in the television era.