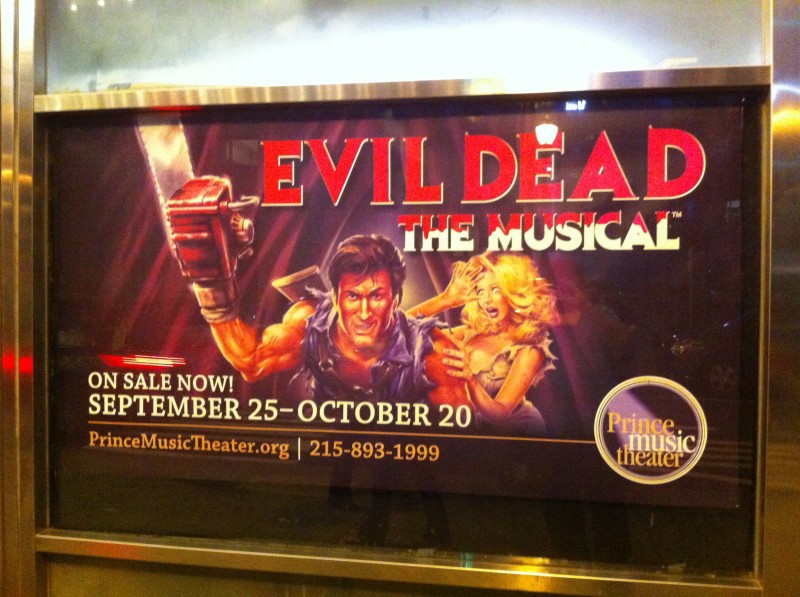 I’m a huge horror fan, so I’m excited when I see the genre translated to other media like musicals. Last year, I was lucky enough to catch Misery, and this year sees the arrival of Evil Dead – The Musical in Philadelphia. The musical has been around for 10 years, and I remember ordering the soundtrack CD from my comic book store around the time of its debut. It’s currently buried in my cellar, and no group of college students would be able to find it. I was excited to find out that Evil Dead – The Musical would take up residence at the Prince Music Theater in Philadelphia from September 25 to October 20. I enjoyed this production and its many unique elements. Sadly, many sound problems reduced the fun because much of the audience had no clue what was being said or sung.

George Reinblatt wrote the book and lyrics for this punny, campy outing, and he, director Christopher Bond, Frank Cipolla and Melissa Morris wrote the music. There is no live band or orchestra. Instead, Cipolla performed and recorded the canned musical accompaniment. The show got its start in Toronto in 2003 and grew from there into the current production. The creators were certainly ahead of their time to recognize the humor in the Evil Dead movies and do a send-up of the subgenre long before 2012’s The Cabin in the Woods. This theatrical cabin comes alive in ways that you wouldn’t expect and reminded me of Little Shop of Horrors in both attitude and Lindsay Anne Black’s wonderful set and scenic design. You know what you’re in for from the very first number called, ironically, “Cabin in the Woods.” The cast holds up pieces of a car and walks in unison across the stage as they run over images of little animals moved across the stage on sticks and pass a road sign with an arrow and an image of a cabin. Yeah, it’s that kind of show.

I was very impressed with the cast. It’s clear that they’re comfortable with the material and know how to mine each of the moments and lines for comedy. The plot loosely follows the events of Evil Dead and Evil Dead II, so fans of those flicks will get a lot of the in-jokes and references. Five college students from Michigan State look for a remote cabin for a weekend of partying and accidentally unleash ancient demons by reciting passages from — more accurately playing a recording of someone reciting passages from — The Book of the Dead, a weathered tome made of human flesh found in the cellar. Ash (Ryan Ward) and his girlfriend Linda (Margaret Thompson) are joined by Ash’s sister Cheryl (Alison Smyth), Ash’s doofus friend Scott (Rodrigo Fernandez-Stoll) and Scott’s blonde, ditzy girlfriend Shelly (Laura Tremblay). Later on in the show, overalls-wearing Jake (Daniel Williston) leads Ed (Kenton Blythe) and Annie (Tremblay in a dual role) to the cabin. They’re looking for the Book and instead find the aftermath of the college students’ demonic encounters.

The only way to really present the Evil Dead movies as a musical was to hone in on the humorous elements, especially running through Evil Dead II. The show is best when the audience is familiar with the movies, but it’s certainly not necessary. Fans will recognize the importance of an axe, gun, dagger, The Book of the Dead and a tape recorder pulled out of the cellar and notice the stance that Ash and Annie take on stage to reproduce the iconic pose on the poster of Army of Darkness. If you don’t know the movies, you’ll still be part of the fun because of the people around you and the give-and-take response to the show almost like people talking back to a movie. When a curtain got stuck as it was pulled across the stage, the audience laughed and cheered when it was set free. There are other in-jokes and references on set in addition to the Kiss poster and the talking moose head. Cheryl is reading a book that’s clearly a copy of If Chins Could Kill by Bruce Campbell, the cinematic Ash. The Book of the Dead itself is the special edition of Evil Dead that was released in a rubbery oversize book. I recognized it from my own collection.

This is a musical, after all, so there had better be some great songs. The titles alone will make you laugh, from “Look Who’s Evil Now” and “What the Fuck Was That” in Act I to “All the Men in My Life Keep Getting Killed by Candarian Demons” and “Do the Necronomicon” in Act II. Every performer gets a chance to shine in a song, and the styles run from rock to ballads like “Housewares Employee.” The lyrics are half the fun of the show, which is why it was so frustrating to not be able to hear them. Fortunately, I was close enough to hear the actors apart from the speakers. “What the Fuck Was That” contains the response “It’s the Evil Dead” in its chorus, and I enjoyed the line about someone having “Shelly on my shoes” after Shelly undergoes a demonic transformation. Ward certainly delivers a great impression of Campbell and has a nice singing voice, as do Thompson — who belts it out — and Fernandez-Stoll. Williston comes off as Meat Loaf in “Good Old Reliable Jake,” and Blythe finally gets a word in edgewise in the big Broadway number “Bit Part Demon.” Tremblay has the strongest voice as evidenced in the aforementioned Candarian Demons song, whereas Smyth steals every scene with her comedic timing and demeanor, especially as she keeps on popping up from the trapdoor to the cellar. 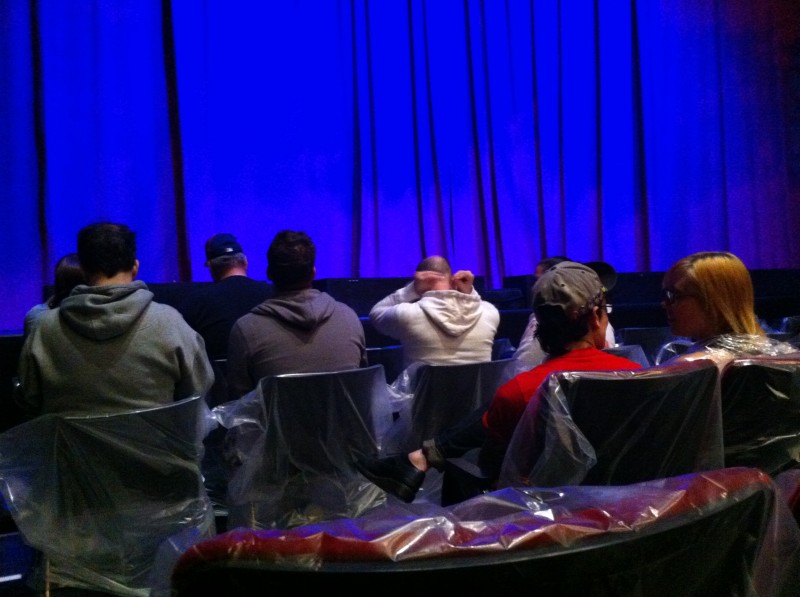 Much is made of the blood and gore in the show. Given the fast pace and transformations that happen in the middle of songs, the cast quickly put on masks of scarred flesh when they’re in their demonic forms. This eliminates the need for special effects makeup and makes it easy for the cast to sing and dance as in “Do the Necronomicon” without dropping bits of makeup. The first few rows are designated as a Splatter Zone, and it becomes clear why they are covered in plastic in Act II. I thought at first that this was an overhyped gimmick, but Evil Dead – The Musical certainly delivers the blood in buckets. There are blood-mist sprayers overhead, and in one number, each cast member squirts blood from one body part or another on the audience in time with blood explosions near the front of the stage. Imagine the timing of fireworks to music with blood replacing the flashing lights. This is as close as you’re going to get in a theater setting to the excess of spraying liquids that you would find in a GWAR concert. The blood is colored water, so it will wash out easily and leave a pink stain for those who want a souvenir on a white T-shirt or the other shirts sold at the concession stand. It’s a hoot to watch, and I laughed even more when ushers came up immediately after the show to escort the blood-soaked patrons along strategically placed plastic paths on the theater floor toward the exit.

Evil Dead – The Musical is really for an older audience and not for kids. It appeals to both fans of horror movies and musicals, and the comedy makes for a raucous good time. I suspect that the sound problems were growing pains of the theater because this show is the first in the revitalized theater’s season, but that needs to be addressed if it hasn’t been already. I saw some personnel scrambling after Act I, and the echoes and feedback were greatly reduced in Act II. I waited many years to finally see Evil Dead – The Musical, and I was not disappointed. This year saw the terrifying, serious remake of Evil Dead, so I’m glad to have taken this second journey across the bridge to this campy cabin story full of laughs, demons and, yes, blood.