As we continue our jaunt through the evolution of theropod dinosaurs, we grow inexorably closer to birds. As we get closer to birds, we find dinosaurs that are more and more similar to birds as well as evidence of increasingly complex feathers. The story of Coelurosauria (SEE-lure-oh-SORE-ee-uh) shows us the evolution of feathers from simple fuzzy structures like hair to the complicated vaned structures that we see in the modern flying dinosaurs every day. 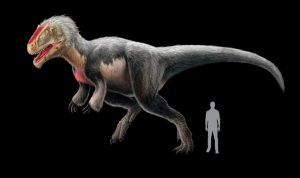 The first main group within Coelurosauria is a fan favorite — the Tyrannosauridae. This group is named for its oldest known and most famous member (Tyrannosaurus rex). However, while many tyrannosaurs were giant predators like their namesake, the more primitive species were generally smaller and had skulls that were shaped much more like those of the ceratosaurs that I mentioned in the previous article. In addition, one of the most spectacular finds was of a Chinese tyrannosaur, almost as big as T. rex, that was covered in proto-feathers or dino-fuzz. This animal is called Yutyrannus huali, which is a mixture of Chinese and Latin and means “resplendent feathered tyrant.” 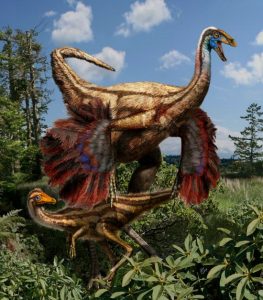 The next major group is one that you may recall from The Lost World: Jurassic Park — the Compsognathidae. This group proves a stark contrast to the giant tyrannosaurs because they represent one of the smallest known groups of dinosaurs. Compsognathus itself was the smallest dinosaur known to science until the 1990s and was no bigger than a dog. This group includes some species such as Compsognathus that have fossilized skin impressions without feathers, but it also has species with some of the most impressive displays of fossilized dino-fuzz that have been discovered.

Next we have a group that was also featured in the Jurassic Park films — Ornithomimosauria. The name means “bird-mimics,” and most of the species (such as Gallimimus, or “chicken-mimic,” from the stampede scene in the first movie) have names that fit this theme. These tend to be lithe, bipedal herbivores and were also clad in true feathers. This is the first herbivorous group that we’ve come across so far in our journey through the theropod tree, but it will not be the last. These animals also lost their teeth and had bird-like beaks in addition to the impressive displays of feathers, primarily on their arms and tails.

Finally, we come to a large group, called Maniraptora, or “hand-thieves,” that contains all of the remaining subgroups. The first of these

subgroups is a bizarre group of giant herbivorous theropods with giant claws on their hands. These are the therozinosaurs. They are frequently analogized to giant ground sloths, although the accuracy of this interpretation is up for debate.

Oviraptorosaurs are another group of strange, beaked theropods. It is not clear whether they ate plants, seeds, small animals or anything else. These animals were also beautifully feathered, but they’ve got a bad rap. Their name means “egg thieves” because the first one that was discovered (Oviraptor) was found on a nest of eggs. The paleontologist Roy Chapman Andrews (the real-life inspiration for Indiana Jones) and his field crew had been finding these eggs for a while and assumed that they belonged to the more commonly found dinosaur Protoceratops, a basal horned dinosaur. Due to this assumption, they decided that the theropod had died and had been buried in the act of stealing these eggs for dinner. It wasn’t until decades later when more specimens had been found that it became clear that these dinosaurs were actually brooding on their own nests, just like modern birds do, and that the eggs did not belong to Protoceratops at all! 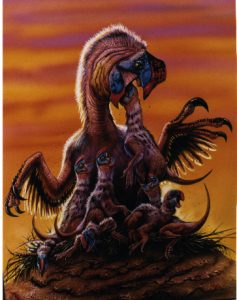 The last group that I will discuss in this article is another strange one called Alvarezsauria. This is another group of probably herbivorous theropods, although they may have been more like dinosaurian anteaters. The members of this group look very similar to ornithomimosaurs, but quite a number of them have lost digits on their hands. This occurred to the degree that several of them have only a single finger on each hand with a hard claw. One hypothesis is that they used these claws to dig into termite mounds.

I had intended for both my last post and this post to finish up this overview series, but the diversity of the theropods has gotten the better of me again! I’ll finish up next time with Paraves, the group that includes birds and all of their closest relatives.