Welcome to the last segment of A Brief Overview of the Dinosaurs! When we left off, we had traversed most of the way up through the theropod tree. The group that we have reached now is called Paraves, which means “next to birds.” This is a bit of a misnomer, though, because the vast majority of this group is composed of birds! 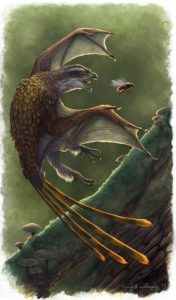 Before we get to the actual birds, however, we have to take a look at a couple of groups that are very closely related to birds. The first is the group called Scansoriopterygidae (SCAN-sore-ee-OP-terr-IDGE-i-day), meaning “climbing wing family.” This group includes three species of strange tree-climbing dinosaurs. The first two, Epidexipteryx and Scansoriopteryx, have strange elongated fingers and are interpreted as being like some strange cross between a bird and a squirrel. While these animals were originally thought to be fairly odd, their strangeness pales in comparison to Yi qi, the third and most recently found member of the group. Yi qi was a feathered, tree-climbing dinosaur just like its relatives, but it also had a flap of skin that stretched between its fingers and down to its body, very much like the wings of a bat. It is unlikely that Yi qi was capable of more than gliding, but it was a truly bizarre animal.

The next group is the Deinonychosauria (DYE-no-NYE-ko-SORE-ee-uh), and the most famous example is Velociraptor. Now, Velociraptor itself is not actually the same as the dinosaur that people associate with that name. Velociraptor was actually about the size of a turkey, not to mention that all of these dinosaurs would have been fully feathered to the point that it would be difficult to tell that it wasn’t a bird unless you saw its mouth full of teeth. There were two other deinonychosaurs that are closer in size to the raptors* from Jurassic Park. These are Deinonychus (dye-NON-i-kuss) and Utahraptor.

Deinonychosaurs are split into two groups — the Dromaeosauria (including Velociraptor, Deinonychus and Utahraptor) 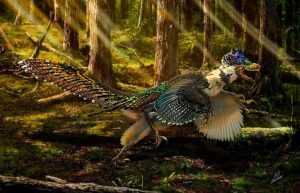 and the Troodontidae. Dromaeosaurs also included a group of four-winged animals epitomized by Microraptor. There is a lot of controversy over whether these animals could fly and, if so, whether this was an independent evolution of flight from birds. Troodontids are less common than dromaeosaurs. They were built more for running, while dromaeosaurs were built more for strength. Troodontids also include one of the “most intelligent” non-avian dinosaurs. Dinosaur intelligence is a tricky topic that I may tackle in a later article, but it is important to realize that Troodon having a brain that was fairly large relative to body size among dinosaurs means that it was probably about as smart as a goose. This doesn’t mean that it was not necessarily capable of complex behaviors, but they were certainly not on the verge of civilization. It is also worth noting that some recent analyses have actually found troodontids to be more closely related to birds than to dromaeosaurs, which would break apart this group that had been fairly well accepted for the last fifty years. 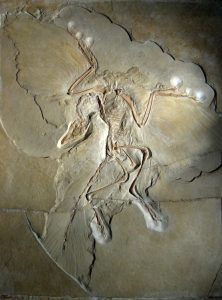 Now we are finally on to birds. The group called Avialae includes all animals more closely related to modern birds than to Deinonychus. The most basal members of this group looked very much like deinonychosaurs. They tended to be fairly small; were covered in feathers; and had long tails, three long fingers and teeth. The most famous of these types of animals is Archeopteryx. Archeopteryx is mostly special because of when it was found: the original fossil was described in 1861, two years after Charles Darwin published On the Origin of Species. It represented the archetypal bird. In all honesty, the only reason that it was recognized as being a bird is largely because it had feathers. In fact, Thomas Henry Huxley, often called “Darwin’s bulldog,” actually posited that birds were highly evolved dinosaurs because of Archeopteryx about a century before the hypothesis became widely accepted.

If the feathers had not existed, Archeopteryx would likely have been just another dinosaur and merely a footnote in the history of paleontology. Instead, it has become the standard against which all other birds are compared. As a result, there have been many articles published recently that discuss how Archaeopteryx was actually not special in any way and that many of its derived features were common among dinosaurs nearby in the evolutionary tree. It is not even clear whether it could fly. I am not going to go into much detail on the diversity of birds, but I do want to note that there was a vast diversity of birds that went extinct along with the rest of the non-avian dinosaurs. All of the modern birds today are descended from a small portion of the diversity of birds in the age of the dinosaurs. In fact, the most common birds during the Mesozoic Era did not have beaks, but actually retained their teeth! 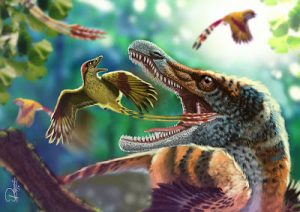 *I tried to write the plural of Velociraptor here before I realized that adding an “s” would make the genus name incorrect, and there is no grammatically correct way to italicize part of a word. This was something that I’ve never run into before, and I hope you find it as amusing as I did.