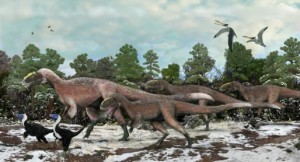 A group of Yutyrannus, a close relative of T. rex, which were found with evidence of “dinofuzz.”

One of the most striking transformations in our perception of dinosaurs in the past couple of decades is the revelation that many of them had feathers of one sort or another.  As I discussed in my last post, birds are living dinosaurs.  However, feathers are incredibly complex structures.  They couldn’t have just popped up out of nowhere; evolution works in small steps and incremental changes.  A recent slew of discoveries, mostly in China, have shown that a wide array of dinosaurs had many different types of feathers.  The dinosaurs that had feathers were mostly Theropods — bipedal, carnivorous dinosaurs.  There have also been finds of other kinds of dinosaurs with similar structures, and there is a lot of debate as to whether or not these structures are actually related to feathers.

Many of the early hypotheses of the development of feathers worked on the assumption that feathers evolved in order to allow birds to fly.  Some of these ideas were things like scales becoming elongated to create a gliding surface, and after enough generations, the scales kind of frayed and turned into feathers.  What we now know is that feathers developed first for insulation and only later became a useful adaptation for flying. Both an adult and juvenile Ornithomimus, showing how the feathers changed as it grew up. It is a theropod, but it is actually herbivorous – not carnivorous – and lacks teeth. The protowings were likely used in a mating display, rather than for flight.

It is now generally accepted than many of the small theropods at the very least were warm-blooded.  I will expound on this in more detail in a later post, but the importance of this is that it explains why the first dinosaurs with protofeathers — affectionately nicknamed “dinofuzz” — needed them for insulation.  A cold-blooded animal has no need for insulation as it derives all of its heat energy from the environment.  A warm-blooded animal generates its own heat, and it is very advantageous to be able to preserve that heat with a layer of fur, feathers or dinofuzz.

Dinofuzz is actually even simpler than downy feathers, appearing very much like hair or fur.  Moving up through the evolutionary tree, we find examples of protofeathers across an entire spectrum from dinofuzz to flight feathers. Some examples of these feathers in between dinofuzz and modern feathers include the following types: several strands of dinofuzz all coming from the same follicle, feathers with a quill whose vanes do not Velcro together and symmetrical true feathers even on the “protowing.”  The raptors — like the Velociraptors from Jurassic Park — actually had true feathers and even asymmetric feathers on their protowings.  They likely could not fly, but I will explain how they might have used them to hunt in my next post.