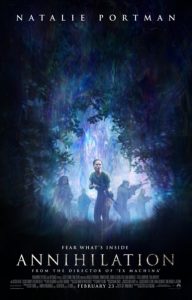 I expect science fiction films to show me something that I’ve never seen before and provide a story that’s original in some way. With countless books, movies and short stories available, filmmakers find it difficult at best and usually impossible to avoid triggering some memories in audiences of past experiences. I’m an easy person to entertain even if something isn’t entirely original; just keep me engaged, and I’m all in. I’m happy to report that Annihilation did exactly that for its entire running time of nearly two hours. Although adapted from a book and occasionally visually reminiscent of other sci-fi properties, Annihilation presents a science fiction mystery that draws you in if you let it as much as the characters who get intertwined in the colorful landscape.

Writer/director Alex Garland received a lot of deserved acclaim following 2015’s Ex Machina. Already a solid writer with such contributions as the novel for The Beach and the script for 28 Days Later…, the next logical step was for him to guide his visions as a director. Garland wrote for both video games and movies, so his knowledge and experience provide a unique combination of perspective and skills. Annihilation feels like the result of everything that came before. Part expedition and part mystery, Annihilation drops details like bread crumbs and makes you hungry for that next delivery. Biologist and professor Lena (Natalie Portman) merely exists as she has no answers for where her military husband Kane (Oscar Isaac) has been for the past year. His unexpected return sets off a chain of events that leads Lena and an all-female team into an ever-expanding classified location known as Area X through a prismatic barrier called The Shimmer. The audience learns about the history of this physical anomaly in the United States and the activities of the teams previously sent in just as Lena and the other women do.

Isaac has a key role, but most of his scenes are in flashbacks. The other male roles are almost cameos, so here’s the female science fiction experience that you didn’t know that you needed. Portman brings her A game using both power and vulnerability. (However, a beach scene took me briefly out of the film and reminded me of Portman’s recent Miss Dior commercial.) All of the team members are damaged in some way, and a need for answers drives Lena. Jennifer Jason Leigh frequently picks eclectic roles. Her psychologist Dr. Ventress serves as team leader and guide with some secret just under the surface that manifests itself in the way that she never smiles and constantly plays with her hands. Gina Rodriguez (Jane the Virgin), Tuva Novotny (the upcoming Borg McEnroe) and Tessa Thompson (last seen in Thor: Ragnarok) round out the team and provide strong personalities to mesh with Lena and Dr. Ventress.

Visuals convey the story almost more than the events themselves. Once through The Shimmer, the team encounters a world overgrown with vegetation like that TV show Life After People. Mutations of flowers and creatures provide an alien appearance rather than the simple swamp that Area X used to be. Flowers get more interesting and colorful as the team further explores Area X, and the mystery deepens when flowers grow into human forms. Garland plays a lot with refraction of light through other surfaces, including seeing Lena and Kane through a plastic curtain and their fingers through a water glass. It’s probably no mistake that some sights in Annihilation reminded me of Aliens or John Carpenter’s version of The Thing; Garland pulled in textures from his film memories.

I’ve been as vague as possible so that you can discover the secret behind Annihilation on your own with nothing more than the trailer to go by. I don’t know how well the movie adapts the Jeff VanderMeer novel on which it’s based. With two other books in the series, there could be more movies in the future. Regardless of that possibility, Annihilation feels like a complete story to me. The narrative effectively plays with time, although a framing sequence stupidly reveals what happens to characters before they even appear on-screen. Reflection and repetition feature heavily, and that translates to time, light and sound to create a challenging film that will stand up to multiple viewings. Fans will smile at the Star Wars connections to Portman and Isaac, yet that happens a lot with so many movies in the Star Wars universe now.

Music and themes permeate Annihilation almost as much as Close Encounters of the Third Kind. Quiet, persistent guitar music sets the mood at various points throughout the story, while discordant sounds made up of wildly different notes jar your ears. At one point, musical repetition plays a key part in the mystery, so stay alert and attentive as you watch and listen. As much as I was hooked from the beginning, the last 30 minutes were especially intense with me being wowed by some of the events and revelations that reminded me of why I still go to the movies. Annihilation delivers a unique experience in some otherworldly place borne of imagination. 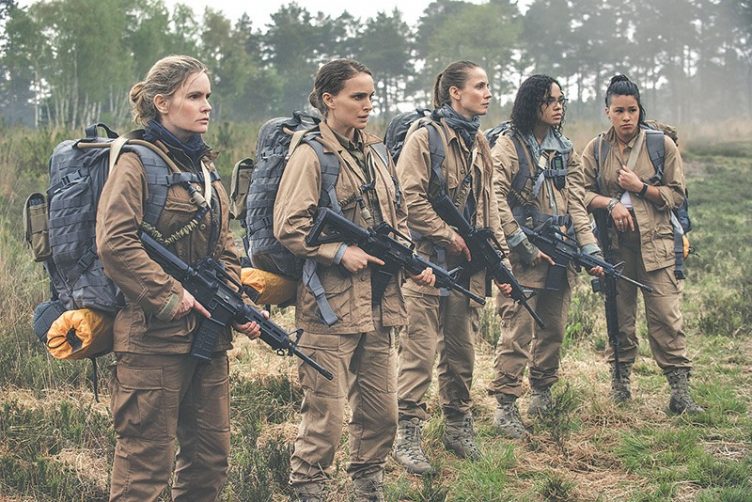