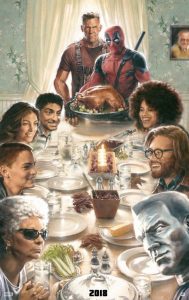 Make me laugh out loud, and you win me over. It’s that simple. If you’re supposed to be a comedy, prove it. How many times do they show all of the sight gags or jokes in a trailer and the movie itself doesn’t hold up? I think back to films like Blazing Saddles and The Hangover that maintain the levity throughout, and that’s what I want in a comedy. The action-comedy brings its own expectations and limitations, yet the filmmakers walked that fine line perfectly in Deadpool. Concerned that its sequel would burn out rather than light up, I hoped for the best and found that this film entertained me even more. Deadpool 2 delivers the goods as an irreverently hilarious and literally side-splitting comedy.

Although director David Leitch took the reins from Deadpool director Tim Miller, he brings his own action experience to the mix after last year’s highly entertaining Atomic Blonde. Writers Rhett Reese and Paul Wernick penned Zombieland in addition to Deadpool, and if there’s ever been a way to laugh about the zombie apocalypse and still get the action, that film brought the two together. Deadpool 2 ultimately layers on more of what made the original so successful, but it starts out with mercenary Wade Wilson/Deadpool (Ryan Reynolds) in a bit of a funk after a personal loss. Colossus (voiced by Stefan Kapicic) and Negasonic Teenage Warhead (Brianna Hildebrand) convince Deadpool to go back with them to the X-Men mansion. Taking on a mission to stop an out-of-control teenage mutant named Russell (Julian Dennison), Deadpool also confronts a cyborg from the future named Cable (Josh Brolin), who wants to kill Russell before he destroys his future family. Deadpool puts together a rudimentary version of X-Force that features Domino (Zazie Beetz), and the rest of the film contains nonstop action in one crazy sequence after another.

The Deadpool movies just wouldn’t work without the perfectly snarky, smarmy performance by Reynolds. This character resonates so well that I even watched the various ads that Reynolds filmed in character, including one against cancer. Morena Baccarin of Gotham plays Wade’s girlfriend Vanessa, but she has a diminished role here as opposed to the first film. Brolin ranks as the movie villain of the summer after his role as Thanos in Avengers: Infinity War. Unlike that appearance hidden in a mostly digital character, Deadpool 2 features a buff, ripped Brolin who’s every bit as menacing. Returning actors T.J. Miller, Leslie Uggams and Karan Soni shine in their individual moments, including Uggams cursing and embracing her character Blind Al in a way that I would have never expected back in the ‘70s. There are some really great surprise cameos and familiar actors in much smaller roles, and those appearances contribute to the overall wackiness of the movie.

Deadpool 2 excels as a comedy because there don’t seem to be any limits or boundaries. Both films delight in their jokes at the expense of Hugh Jackman and his character Wolverine. The opening titles spoof other films, and there are references galore that you’ll probably miss if you aren’t paying attention. In fact, I need to see this movie again because the audience laughed so much that I missed other lines. It would be a disservice to these movies to refer to them as superhero films when Deadpool is more of an antihero than any kind of superhero and they delight in the R rating that allows more vulgarity and violence. Deadpool has the ability to regenerate his body after taking damage, and the length of time depends on the severity of the trauma. The first film humorously dealt with a severed hand and the after-effects, while they step up the concept here for even greater laughs. The R rating also means that the filmmakers offer a lot of anatomical humor, so just expect butt and crotch jokes mixed in with the self-referential comedy that often breaks the fourth wall.

There are some pretty impressive action sequences that run the gamut from car chases to an unforgettable skydiving sequence. Expertly choreographed scenes reinforce the artistry behind all of the silliness. When Cable and Deadpool go at it, clear the streets and let them fight. Expect lots of blood and gore along with the action. The best way to show Deadpool’s regenerative abilities is to hit him with a lot of bullets amid other attacks and fight sequences. The finale multiplies the destruction and makes your head spin with all of the on-screen activity. Deadpool 2 doesn’t skimp on the action half of the action-comedy label, so don’t expect much down time.

I don’t know how Reynolds convinced Celine Dion to sing the song “Ashes” for the titles and even film a special music video. Dion clearly has a saucy side that she should embrace more often. Songs are essential to the Deadpool franchise, and you’ll hear Air Supply’s “All Out of Love” in the same film with “9 to 5” and an AC/DC classic. Such music enhances the experience even more and even serves as a punch line at times. I’m all out of words other than to say that I look forward to where the filmmakers take this irrepressible, acerbic, iconic character in the eventual third movie. 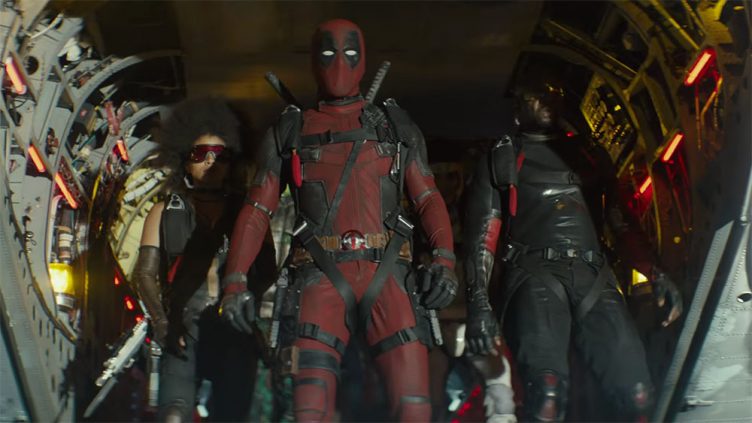