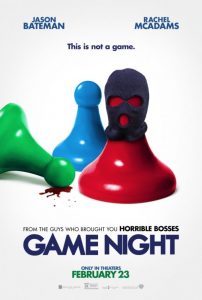 A nerdy couple and their competitive friends take part in an elaborate murder mystery contest that goes horribly wrong in Game Night.

Max (Jason Bateman) and Annie (Rachel McAdams) are your typical suburban couple who share a passion for games and competition. Their coveted weekly game night with like-minded friends is the highlight of their social calendar. Every meeting is much like the last until Max’s highly successful older brother Brooks (Kyle Chandler) drops in for a visit. He’s got a plan to raise their game night to a whole new level. The entire affair brings out the worst in Max, who’s spent a lifetime living in his brother’s shadow and resents this incursion into his nearly-sacred territory. When Brooks presents his challenge to the group, Max and Annie set their goal on winning it at all costs. What none of the friends realize is that the game they’re playing is not a game at all.

This seemingly standard romantic comedy takes off with a raucous running start and then careens across the rest of its 100-minute length like Mr. Magoo trying to master a skateboard. It’s equal parts fervently funny, grossly graphic and utterly absurd. The whole thing only works at all because of the unmistakable chemistry between Bateman and McAdams. This is a pairing I want to see more often. They both have flawless comedic timing, always know just the right facial expression and ooze a vibrant, but naturally lovable charm.

The surrounding cast is workable and at times wonderful, but each of the couples are much better off when they’re on their own than when all of them are together. The two main non-couple roles belong to Chandler as the meddlesome brother and Jesse Plemons in the most memorable role of his young career. The brother role is pretty much a cookie-cutter character who frankly could have been played by anyone. However, Plemons hits the mother lode as one of the creepiest neighbors whom I’ve ever seen. Every time that he’s on-screen, you can feel your sphincter tighten just a little bit more than with his previous scene. That same feeling permeates much of the rest of the film. Time and again, you’ll find yourself cringing at unexpected moments that are often quite hilarious.

This could have been the comedy to beat in 2018 if not for its shockingly uneven plot. Everything about the film swings wildly between harsh extremes. One moment, we’re completely immersed in laughter before being blown away by the utter stupidity of what comes next. There’s a famous scene in The Hangover where a chicken shows up inexplicably. It’s nutty to the point of doing a triple-take, but somehow entirely believable. It just works. Little in this film flows, especially when it tries for its own “chicken scenes.” The resulting comedy ends up feeling more skit-based than intended. A few of the jokes also go on a bit too long, especially one involving an infidelity gag.

I was continually reminded of the film Date Night, starring Steve Carell and Tina Fey. It has a similar plot with similarly likable leads, but presents its story in a much more fluid way. Game Night does have its moments, but to borrow from its theme, it sometimes passes Go and collects $200, and other times, it instead ends up going directly to Jail. 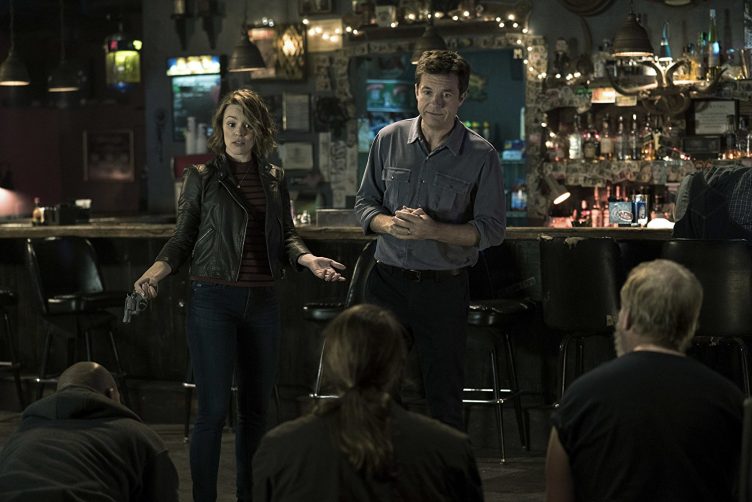