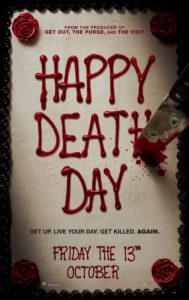 A fine line exists between horror and comedy. Most horror films contain some laughs to ease the tension. That was always part of the formula for a successful fright flick. Some others like Scream and the middle entries in the A Nightmare on Elm Street series layer on more comedy and still maintain the terror. I longed for another movie that expertly straddles the line between horror and comedy, and this Friday the 13th, my wish came true. Happy Death Day wears the costume of a maniacal killer while revealing a bit of a clown underneath.

Blumhouse Productions established itself over the past few years as a purveyor of horror films of various levels of quality. The company also produced huge hits like 2014’s Whiplash and this year’s Get Out, one of my favorites this year. They struck gold again with Happy Death Day. Director Christopher Landon started as a writer and later directed 2014’s Paranormal Activity: The Marked Ones. Although I did not like that movie, he more than redeemed himself now. Writer Scott Lobdell made his mark as a writer of the animated X-Men series over two decades ago, and I only hope that he doesn’t take as long to script another project as entertaining as this one.

The plot is not very original. In fact, some might call it derivative of other movies, notably 1993’s Groundhog Day. The filmmakers would probably celebrate that comparison and, indeed, directly pay homage to that classic film in theirs. The originality comes from how they approach their riff on the repetition of the same day ad nauseam. Sorority sister Tree Gelbman (Jessica Rothe, most recently of La La Land) wakes up at 9:00 AM on her birthday in the dorm room of a strange guy named Carter (Israel Broussard). Although he seems nice, Tree acts like a bitch as she does to everyone else and storms out of the room to start her day. Later, a mysterious killer in a mask of her college’s mascot (a chubby baby with one tooth) ends her birthday early and violently. Tree wakes up again in Carter’s dorm room as if the day didn’t happen. Of course, she remembers everything and frantically tries to reveal the identity of the killer over many repeats of her birthday.

I honestly don’t remember Rothe from La La Land, but she’s unforgettable now. Her evolution over the course of the movie from snotty sorority skank to scared victim to powerful heroine comes off as believable. Rothe’s scream queen has it all. Her performance supports the plot because I wanted her to die from the moment that she appeared on screen, and there are lots of suspects at the college who feel the same way. Let’s not forget Broussard’s work here as well. He plays off Rothe’s various moods as the stable guy who doesn’t judge her and becomes instrumental in helping her figure out an escape from this never-ending birthday. The fine work from the rest of the cast rounds out the film with characters who could be friends or foes, depending on the situation. The actors mostly repeat the same scenes until they get more to do when Tree actively changes the daily events.

Although structured like Groundhog Day, Happy Death Day works for me because it leans heavily on the slasher genre for mood and presentation. Just like such flicks, there are multiple potential killers with valid motives, and the film expertly juggles these possibilities until finally revealing who’s wearing that mask. Unlike those genre films, there’s only one victim, yet she dies in enough creative ways to increase the death count to rival other slasher flicks. With Tree’s attempts to stay ahead of death in the form of the masked murderer and prevent death from snuffing out her life like a birthday candle, I’m forced to think of Groundhog Day meets Final Destination. Prepare to cringe at the creepy parts and laugh a lot because the filmmakers surround those tense scenes with just the right amount of comedy. They establish the attitude of the film from the opening shot and also continue with a montage of Tree’s wackiest experiments to break out of her endless loop.

Although there could have been another version with plenty of gory deaths, you largely don’t see the actual deaths or a lot of blood here. When I noticed the film’s PG-13 rating, I cringed. Fortunately, the filmmakers embrace the rating and make the movie more accessible by toning down the violence and ramping up the comedy. The Walking Dead’s composer Bear McCreary delivers another effective score as he did with last year’s 10 Cloverfield Lane. I thought that there would be no surprises, but the few twists in the film made me like it even more. Even reheated food can taste good and seem like a brand-new meal on a fresh plate with a pleasant server. Happy Death Day satisfied my hunger for horror and left me wanting more from the filmmakers. 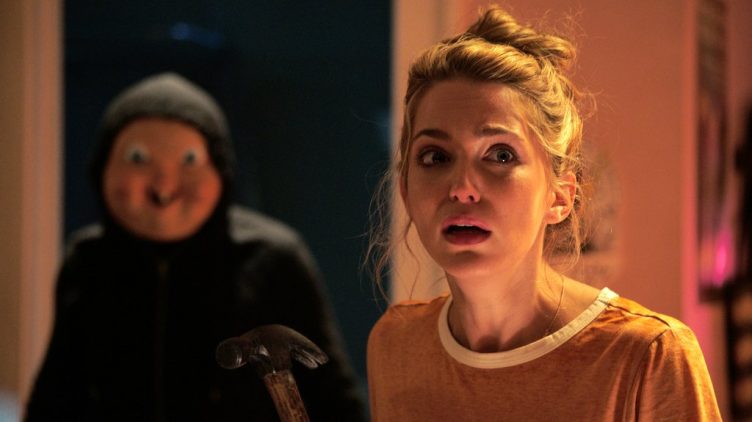