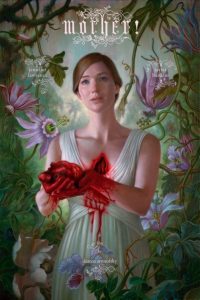 When I first saw the stylized title of mother!, I recalled the cries of “Mother!” by Norman Bates in Psycho. If you see this new kaleidoscopic film by writer/director Darren Aronofsky, the word “psycho” might come to mind. Only someone with a deranged mind or a truly brilliant creative streak could come up with this movie that pushes the boundaries of narrative and metaphor. Perhaps Aronofsky exhibits a little bit of both. People will have all kinds of reactions to his latest delivery. Although I saw and understood most of what Aronofsky presented, inconsistencies and ridiculous situations make mother! more heartless than nurturing.

It’s hard to explain what’s going on in mother! without exploring the extrapolated meanings of the movie, so I’ll stick to the basic premise and leave the rest for you to discover. Jennifer Lawrence plays the dutiful wife to a frustrated poet (Javier Bardem) who mopes around their beautiful house while she renovates it. In the middle of a mundane day, a doctor played by Ed Harris shows up, purportedly because he thinks that the place is a bed and breakfast. Later on, the doctor’s pushy wife (Michelle Pfeiffer) arrives unannounced and acts like she owns the place. Before long, all kinds of people come by, much to the shock and horror of the wife, especially because her husband welcomes them one and all. The events and visitors get progressively more bizarre, and you’re right there with the wife as she reacts to all of the madness when all she wants is to be left alone.

Lawrence does some of her best acting here, so you can expect to hear her name mentioned if this movie is still remembered during awards season. The camera lovingly presents Lawrence as a mature woman far removed from Winter’s Bone and The Hunger Games. Her work might be the only element that truly holds this film together at some level before it completely goes off the rails in the third act. Bardem plays the straight man here with very little emotion and a more reserved personality until certain actions set him off. Bardem and Lawrence play against one another elegantly in a dance that gets ruined as more actors intrude. Although I’m a fan of Harris, his character didn’t grab me here. Pfeiffer mesmerizes in every scene and steals the spotlight even from Lawrence as she prances around the house.

The major problem with mother! involves the multiple levels of symbolism and references that lose any power as the events cross the line from believable to silly and stupid. Had Aronofsky found a way to keep the narrative under control and realistic, he could have landed an uppercut instead of a cheap gut shot. Once you think about mother! some more, it’s the kind of film that you might want to watch again even though you probably won’t succumb to the temptation. Aronofsky buries the message in symbols like blood, the use of the color yellow and hearts. A film class would have as many different papers on mother! as there are students. Every line of dialogue from the leads carries stronger meaning as well from the opening word spoken by Lawrence to other exchanges that might seem to be throwaway lines at first. Lawrence comes across as an Earth Mother in bare feet throughout the entire film and often showing off her ample bosom. There would be a lot to talk about with Aronofsky over some drinks or a meal. Something set him off or got his creative juices flowing, and with all of the blood, wounds and violence, you could call mother! an alle-gory.

The magnificent house design features a central stairway to the floors and a skylight. This location contains lots of side rooms and a full basement so that the plot could only unfold within these walls. A variety of camera techniques offer both sweeping beauty and paranoiac close-ups. When things get particularly wild, I must tip my hat to cinematographer Matthew Libatique for somehow bringing to life Aronofsky’s vision. You wouldn’t think that stunt performers would be so crucial to a drama confined to this house, but the list of such actors is quite large in the credits. There’s no slacking here in the technical department.

Aronofsky’s previous film, Noah, turned off a lot of people with its mixture of the Bible and fantasy. (I had a mixed reaction.) Those same people will find more confusion here and may stick to either the hate or love end of the spectrum. The story transcends genres and doesn’t fit nicely into any category. Is this a drama, a thriller, a horror flick, a fantasy or even a comedy? I don’t know because it collapses under its own weight and promise, making me exclaim ohbrother! 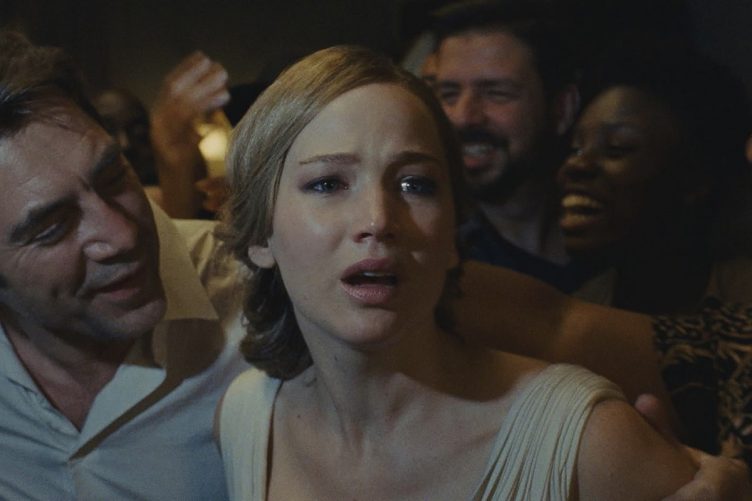