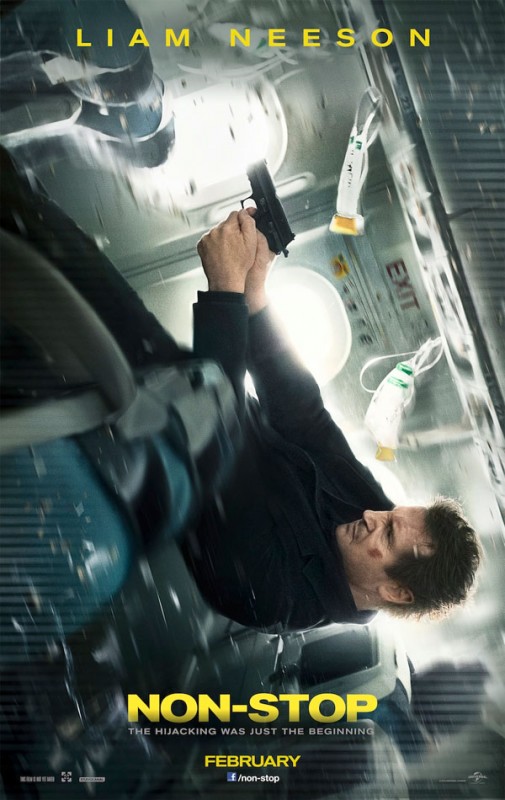 Liam Neeson has had some incredible success with action films in the Taken movies, so it’s no surprise that he would want to keep this ball rolling as long as he can. I think that my fellow reviewer, Rich Heimlich, assured that Non-Stop would be an in-flight disaster when he remarked in The Year in Movies 2013 that Neeson was absent from his list of the worst films of the year and called out Julianne Moore for her recent questionable performances. Well, thanks, Rich. Non-Stop features both performers in a ridiculous action movie/thriller combo that throws credulity out of the plane before it even takes off. A good premise goes into a nosedive rather quickly, so Non-Stop for me was a tedious trip of nonstop nonsense.

Director Jaume Collet-Sera (director of the 2005 House of Wax, Orphan and Unknown) worked with Neeson once before in the better film Unknown. Writing team John W. Richardson (a TV series editor) & Christopher Roach (a producer and writer on various TV series) and Ryan Engle have delivered a stinker as their first movie screenplay, and there was possibly nothing that Collet-Sera could do to correct their ample mistakes other than to put the film on autopilot. Bill Marks (Neeson) is a U.S. air marshal assigned to a transatlantic flight from New York City to London. In the first few seconds of the movie, he swigs some alcohol before heading into the airport to report for duty. He scans the crowd to look for suspicious people before boarding, but he never seems to use his brain after reaching altitude. Most of the people on the plane are extras, who can all tell their family that they got to appear in a movie with Neeson. Lucky them.

Moore is featured passenger Jen Summers, who switches seats so that she can have a window seat next to Marks. Other passengers include Scoot McNairy (most recently seen in 12 Years a Slave), Nate Parker, Corey Stoll and Omar Metwally, who is a Muslim doctor and a potential terrorist like all of the other passengers. The flight staff includes flight attendants Nancy (Michelle Dockery of Downton Abbey) and Gwen (Lupita Nyong’o, also of 12 Years a Slave) and the cockpit crew played by Jason Butler Harner and Linus Roache. Marks receives a text message on his secure air marshal phone that someone will be killed every 20 minutes unless $150 million is wired to an account. This is a good setup because the plot has the constant expectation of another death as well as a whodunit element that keeps Marks on his toes like many characters in Alfred Hitchcock movies. Unfortunately, the plot doesn’t involve almost any scenes that I buy from takeoff to landing.

I won’t get into specifics that will ruin the plot for those brave enough to see this dud, but I would be remiss if I didn’t give you examples of the ludicrousness of the actions of Marks and the other characters. As Marks boards the plane, Nancy gives him a knowing look and later delivers him water when he asks for a mixed drink, which indicates that Nancy knows Marks well enough to try to help the alcoholic avoid drinks. I don’t know much about the duties of air marshals, but I thought for sure that nobody on the flight crew was supposed to acknowledge their presence or even know who they are. Shea Whigham plays fellow air marshal Agent Marenick, and he and Marks throw the rules out the window when Marks corners him to discuss the threatening text messages. I would be OK with the movie if these minor indiscretions were as unbelievable as the plot gets, but it descends and never stops with a bomb that receives a rather unconventional treatment, dead bodies here and there on a closed plane, people going in and out of the cockpit like the door’s almost not there and guns and fists flying. I thought that air marshals were supposed to remain anonymous unless a physical threat to the plane surfaced — not a text war with an unseen person. 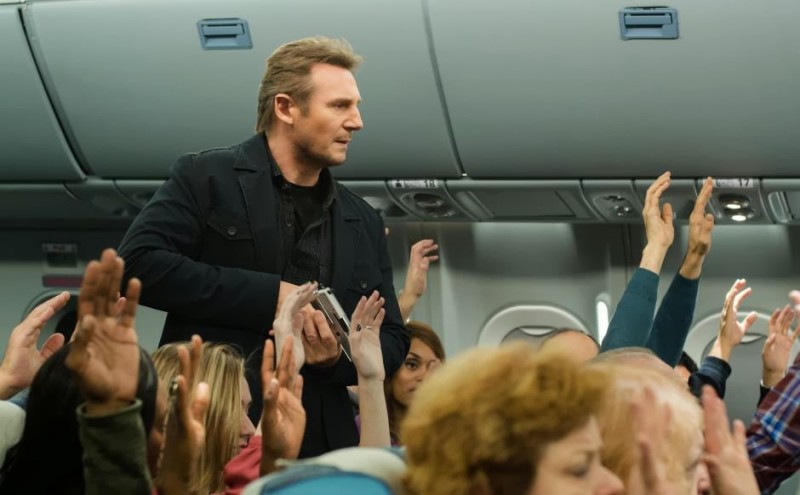 Neeson and Moore both deserve better than this movie. Dockery and Metwally are the best of the cast members, delivering realistic performances amid this mess. Nyong’o impressed me with her debut performance, and she has almost no lines and no big scenes here. I hope that she rides the awards buzz into better movies. There’s a point in the movie when you just give up looking for rationality and accept that it’s not going to get any better. I strapped in and just waited to see how it would all end. Some tense sequences are good until Marks or one of the other characters tries to explain what’s going on and ruins the moment. The motivation for the eventually revealed villains is the final kick to the head because it is impossible given the actions that take place in the movie. There are plenty of airplane thrillers that could happen in a post-9/11 world. Non-Stop is watchable but crashes miserably as you start to poke holes in the silly story. No parachute can save this flick from crashing.