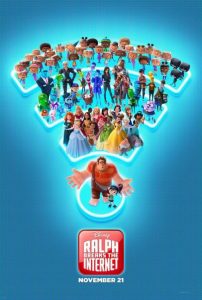 I have always loved arcades since I was a child, so Wreck-It Ralph resonated with me more than many other animated Disney films. A story that explores what happens to video game characters “off the clock” represents the kind of imagination that gamers display every day. When I saw the trailer for Ralph Breaks the Internet, I got excited all over again like I did for the first movie. Ralph and Vanellope let loose on the Internet?! This has to be another hit film. Unfortunately, the resultant adventure disappoints despite some valiant attempts to deliver the kind of movie that I expected it to be. Ralph Breaks the Internet contains all of the elements for a wonderful sequel yet wrecks them with some questionable decisions and a silly finale.

Ralph (voiced by John C. Reilly) and Vanellope (Sarah Silverman) live a good life in the arcade after their previous experiences. Suffering from ennui, Vanellope dreams of more and instead nearly loses everything when her game, Sugar Rush, is in danger of getting scrapped after a broken steering wheel. With some support from Felix (Jack McBrayer) and Calhoun (Jane Lynch), Ralph and Vanellope travel to the Internet to purchase a new wheel for the game. Of course, nothing is that simple. Vanellope falls in love with the racing game Slaughter Race, fronted by Shank (Gal Gadot), and Ralph receives advice from the BuzzzTube video sharing site’s “head algorithm” Yesss (Taraji P. Henson) on how to generate money to buy the wheel. Writers/directors Phil Johnston and Rich Moore and a team of other writers create a world and characters that are probably too much for one film, and as a result, the story falls apart in the final half-hour.

Reilly reliably portrays Ralph as a lovable character who’s a bit thick in the head. McBrayer and Lynch don’t get nearly as much screen time as they should, but this isn’t their story anyway. Silverman steals the show with her rambunctious performance and scratchy voice. Vanellope’s journey centers the film to the point where it should have really been called Vanellope Escapes the Arcade rather than something with “Ralph” in the title. They even give Vanellope a song and production number with music by Alan Menken that feels lifted straight out of Beauty and the Beast or La La Land. New gals Gadot and Henson make their mark on the series with dynamic characters who embody the spirit of their real-world counterparts. Shank even looks like Gadot. Although there are a few cameos, the real casting achievement takes place when Vanellope wanders into the Disney area of the Internet and meets the major Disney princesses, almost all of them voiced by the original actresses. These princess scenes far surpass the rest of the film in wit and humor, and I only wish that the writer(s) who scripted these sequences had command of the entire plot.

The beautiful visuals and inspired representation of the Internet kept my eyes glued to the screen. The first movie established the ins and outs of video games, and that’s carried forward here with such scenes as Ralph and Vanellope drinking in the Tapper game and racing in Tron with the viewpoint shifting to the arcade game cabinets as opposed to inside the game. The Internet has thousands of avatars with big heads and tiny bodies running around to represent the users connected to the Internet, and Web sites appear as buildings in the landscape. The Instagram and Twitter locations are both obvious and witty. Some of the scenery goes by so fast that I’ll likely hit the pause button a lot when I watch the home version. Inventive scenes in the dark Web made me want more. Slaughter Race looks like a combination of Twisted Metal and Grand Theft Auto with a noticeable yellow tint whenever focus shifts to the game. Plenty of visual puns like pop-up blockers and pop culture references will keep you on your toes. See if you can spot the Dragon’s Lair homage. I’m almost certain that Double Dan was drawn to look like a Star Wars villain.

Ralph Breaks the Internet left me with questions and feeling let down. I could guess why the filmmakers might create their own search site KnowsMore and video sharing site BuzzzTube, but with references to both Google and YouTube that include their logos, it seems like wasted effort. I just don’t get the unnecessary Yesss character other than as a way to embody BuzzzTube. She’s certainly elevated by Henson to more than what is needed for that subplot. A scene in which Ralph tries to remember “eBay” based on a throwaway vocal sound by Felix made me cringe because it comes off as ridiculous and just goes on and on. There’s a point where an “insecurity virus” threatens to deflate the entire plot, and the proceedings got depressing just as strongly as Inside Out. The filmmakers lost me with some terrible scenes and a finale that feels more like King Kong than Donkey Kong.

Fortunately, the movie rebounds at the end for a promising future of the series and some post-credits scenes that made me laugh again. The catchy Imagine Dragons song “Zero” stuck in my head for days afterwards. Some good advice from Yesss to Ralph is to not read the comments on the Internet. Quite the opposite, I hope that the filmmakers do read the reviews and comments and think about a way to take the series up a notch with another sequel. Ralph Breaks the Internet probably broke box office records, and you’ll crack a smile if you look past the glitches in the machine and enjoy the more creative components that hooked me in the first place. 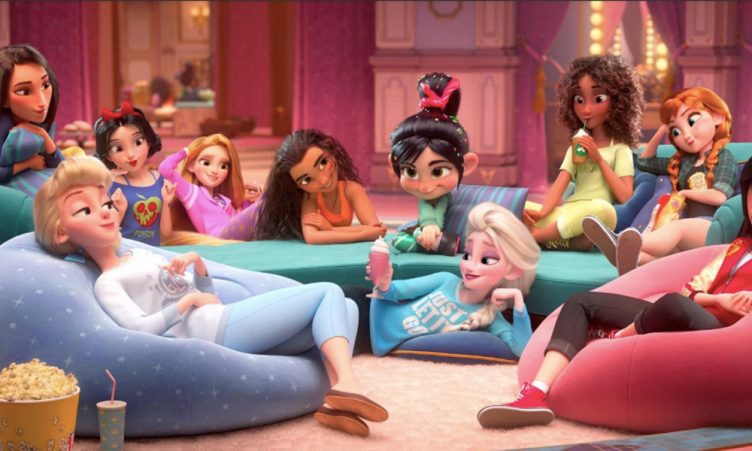