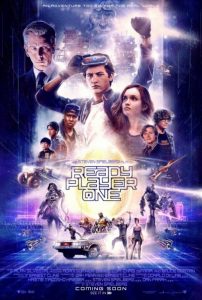 True virtual reality (VR) will obsess people, steal valuable hours out of the day and ruin lives even more than cell phones do now. Everything in moderation, right? I’ve been saying for many years that it’s not really VR for me unless I can swing an imaginary sword at a monster and feel its counterattacks. Right now, VR is limited to shifting perspectives and immersive visuals. That force feedback kind of VR forms the basis of the world in Ready Player One. Very loosely adapted from the popular Ernest Cline novel, people use VR in a digital world called the OASIS as commonly as people check Facebook or Twitter now. Much like the OASIS itself, Ready Player One hits upon familiar themes and dresses them up in splashy visuals for an ambitious but ordinary adventure.

Director Steven Spielberg excels at telling a story with captivating visuals, and this project allows him to explore new ways of advancing the plot by shifting in and out of the OASIS and not losing you along the way. Futuristic technology featured heavily in Spielberg’s Minority Report in 2002 and drew me into a story where the plot and characters were just as important as the bells and whistles. Cowriters Zak Penn and Cline work from Cline’s own novel to create a not-too-distant future where the imaginative OASIS forms both the basis for the plot and the playground for the characters. Ultimately a quest disguised as a game with multiple challenges, Ready Player One takes you on a wild ride that almost feels possible and makes you wish that some of it was. It’s no mistake that the song “Pure Imagination” from Willy Wonka & the Chocolate Factory plays during the trailer. Imagination drives everything in the OASIS and this film.

Wade Watts (Tye Sheridan) lives in Columbus, Ohio, in 2045 and spends most of his time in the OASIS as his avatar Parzival with his best friend Aech, a bulky ogre whom he has never met in the real world. The creator of the OASIS, James Halladay (Mark Rylance), has hidden three keys and corresponding gates that ultimately lead to an Easter Egg within the simulation. The quest activated when Halladay died years earlier, and the prize for finding the egg is the OASIS itself and limitless wealth. Parzival, Aech and other rival avatars, including Art3mis (Olivia Cooke), take on Halladay’s challenges while an evil corporation led by Nolan Sorrento (Ben Mendelsohn of Rogue One: A Star Wars Story) tries to gain control of the OASIS before them. This is a story of virtual boy meets virtual girl, virtual boy falls in love with virtual girl and virtual boy tries to impress virtual girl by winning the biggest prize in history.

Sheridan first impressed me in 2012’s Mud, and this movie will open doors for him with his perfectly understated, geeky portrayal of Wade/Parzival. As much as I loved Cooke’s work in Bates Motel, I was underwhelmed with her bad choices of movie projects that were mediocre or worse like The Signal, The Quiet Ones, Ouija and Me and Earl and the Dying Girl. She was much better in the recent Thoroughbreds even if the movie wasn’t the greatest, and Ready Player One showcases what I always liked about her work — a strong personality and endearing nature that pull you in. Mendelsohn takes on the film’s villain with the same glee that he did in Rogue One, and T.J. Miller delivers the comedy and one-liners as his hired tough guy I-r0k. Rylance convincingly plays Halladay as a nebbishy computer geek, and Simon Pegg goes against type as Halladay’s avuncular business partner rather than one of his usual wacky characters.

You’re simply not going to catch all of the pop culture and gaming references in the film on the first viewing. Characters, graphics and products fill the backgrounds of all scenes in the OASIS from the quick flyby of a Minecraft area to characters like King Kong and a menacing T. rex straight out of Jurassic Park attacking avatars in a race to find the first of Halladay’s keys. There’s an extended sequence that takes place within a re-creation of an iconic horror film, and licensing issues always made me wonder how the filmmakers would tackle a world where every movie, book, video game, TV show, album and creation were available to experience. Spielberg throws some love at director Robert Zemeckis with a couple of elements, and he fortunately doesn’t overwhelm with an endless supply of pop culture characters and objects. Instead, they’re sprinkled here and there, yet this is one of those movies where paused screen shots will reveal still more than what flew by your eyes on the first viewing.

The special effects artists had their work cut out for them with Ready Player One. From the opening shots of the OASIS and its various worlds and themed areas like Planet Doom, they created a place where we’d all like to visit if not spend many hours every week much like people do now in online role-playing games. The opening race establishes the visuals and the relationship between real-world characters and their OASIS avatars. Much work was put into the designs of the main avatars, but I must confess that I like the avatars for Sorrento and I-r0k the best. Sorrento looks like a tough guy robot with a suit, and I-r0k’s costume is all metal skull with holes for the eye sockets and nose. These over-the-top graphics further cement the idea that people like to pretend that they’re somebody else in a virtual world. The film uses a smart visual language like OASIS avatars bursting into coins and loot when they die and real-world characters in VR harnesses blinking red when their avatars get killed. In some cases, I simply couldn’t tell the difference between computer-generated graphics and sets, so we’ve now moved far beyond the technology of the movie Avatar.

If you don’t care about how close the film is to the book, skip to the next paragraph. For those remaining, I would simply say that Ready Player One gets some parts and ideas of the novel very right while not actually adapting the plot, much like last year’s It. This is a simplified, alternate version of the main concepts of the book rather than a faithful adaptation. I recently discovered the novel when I learned that game designer and world traveler Richard Garriott inspired Halladay to some extent. I devoured the novel in two days, so I’m quite disappointed that Cline himself and Penn didn’t adapt the main quest elements of the novel that heavily rely on classic/retro computer and video games like Pac-Man, Zork and Joust. Instead, the hunt for the keys and the final prize becomes way too easy and takes place over a couple of days rather than the years that it took in the book. When I saw that he was a cowriter, I had hoped that Cline would stand firm on certain plot elements, which could have easily been done properly given the vast amount of visual effects already in the film. Instead, the film’s quest goes in an entirely different direction. I wonder if the references to how Stephen King negatively felt about an adaptation of one of his beloved novels might actually be a clue to Cline’s true feelings about this movie. I strongly suggest reading this novel at some point to see what you missed in the theater.

Every few years, the advances in technology make a movie like Ready Player One more possible and expand the palette of the effects artists. I enjoyed this experience for the pure entertainment of it, and Spielberg captivated me much like he did with Close Encounters of the Third Kind. Part cautionary tale for a future in which everyone is constantly connected rather than enjoying real-world interaction, I nevertheless hope that I’m alive when gaming and exploring approach this level of interactivity. Ready Player One effectively opens a door to that expansive future world. Ready Player Russ.