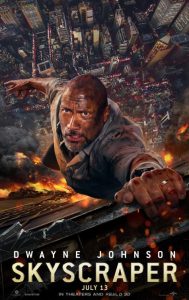 A former FBI agent scales a burning building to save his trapped family in Skyscraper.

10 years ago, Will Sawyer (Dwayne Johnson) and his FBI team failed to defuse a heated domestic disturbance. The aftermath of that haunting encounter drove Sawyer out of the agency and into a much smaller, far safer role as the head of a third-party security firm. Their most recent customer, Hong Kong’s celebrity architect Zhao Long Ji (Chin Han), is putting the final touches on a 255-story engineering marvel. Tasked with certifying its safety, Sawyer is also the first person to stay in its nearly-completed residential level along with his young family.

What none of them realize is that Zhao and his building are the target of a group of terrorists determined to destroy them both.

Johnson’s latest adventure romp is a bit like eating ice cream with your bare hands. It’s delectable, but only until it starts to melt, leaving behind a sticky, unsatisfied mess. Several of the film’s early scenes bear an unwanted resemblance to Johnson’s brainless 2015 disaster film San Andreas. The plot here is every bit as insulting. For starters, no one even blinks at the direct conflict of Sawyer’s family staying in a posh unit in a building that he has to certify. Really?

The real disaster is how the film totally fails to leverage its best assets. Most of the action, especially early on, is simply spectacular. I can’t remember the last time that I experienced real vertigo from the safety of my theater seat. Time and again, the on-screen visuals had me reaching for a seat belt that doesn’t exist. Its best parts were pure Die Hard on steroids. The rest was like Die Hard 2… on my phone… on Ambien.

The action is so good in the film’s first half that we’re able to easily forgive its overuse of horribly bad clichés and plot contrivances. We endure bad guys whom we know are bad for no other reason than obvious casting. We get a ninja-like twentysomething woman who fits the film as much as a sappy folk song about flower petals. We ignore one implausible explanation after another, but once the fire takes hold, it’s the film that ultimately collapses under its own weight. 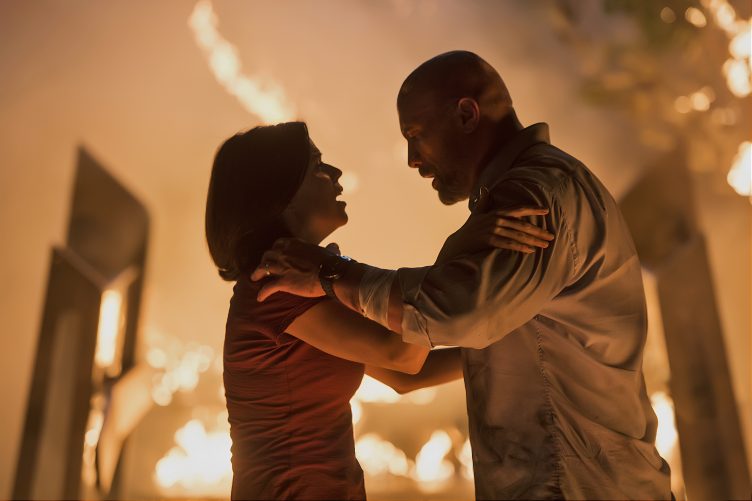