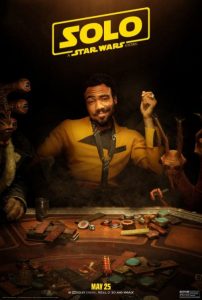 There are plenty of compelling stories left to tell in the Star Wars universe. For decades, authors and video game creators released official books and games that expanded beyond the core canon movies and even weaved in some familiar elements. With Disney now in charge of the Star Wars franchise, these expansions now include additional major motion pictures and theme park lands and experiences. After the success of the excellent Rogue One: A Star Wars Story, I had great hope for a film centered on the iconic, beloved Han Solo. Because of some poor creative decisions, the resultant origin story of sorts doesn’t pack the punch of Rogue One. Still, I’d take a passable Star Wars film over a lot of the other bantha fodder that’s regularly released to theaters. Unquestionably a fun ride, Solo: A Star Wars Story would have been so much better with a shift in focus to generate Lando Calrissian: A Star Wars Story.

When creative teams switch or tag in and out in the middle of a production or writing sessions, the end product often suffers. Solo has that stigma to overcome after credited director Ron Howard took over from directors Phil Lord and Christopher Miller of The LEGO Movie and The Last Man on Earth. The pair left after months of filming due to those dreaded creative differences. Additionally, writing team Lawrence Kasdan and son Jonathan Kasdan collaborated with Lawrence bringing his vast writing experience of Star Wars films and others. I’m not sure who’s responsible for what in this movie, and there are wonderful sequences as well as cringe-worthy scenes and dialogue.

Solo shows the titular character in his younger years way before he developed his reputation and Obi-Wan Kenobi hired him in a cantina on Tatooine. Han Solo (Alden Ehrenreich) works (and steals) for scraps on Corellia with girlfriend Qi’ra (Emilia Clarke of Game of Thrones) and dreams of escaping his existence for a better life. Cut to a few years later, and Han hooks up with Tobias Beckett (Woody Harrelson) and his crew to embark on a life of smuggling items like the valuable hyperfuel called coaxium. Along the way, Han meets faithful companion Chewbacca (Joonas Suotamo) and even reunites with Qi’ra after some time apart. One big job requires a fast ship, so enter Lando Calrissian (Donald Glover) and his Millennium Falcon.

Casting was crucial for this movie, and I’m sorry to say that the producers chose wrong with Ehrenreich. Although he delivers a great character through his fine acting work that could be Han Solo if we had no prior reference, he simply can’t surmount the obvious differences. I fail to see the resemblance or even mannerisms. He would make a great young Jack Nicholson, but not a believable Harrison Ford. The producers should have just taken some images of Ford from American Graffiti and handed them to the casting director. On the other hand, Glover absolutely lives and breathes Lando, and there’s the disconnect. He steals the movie in every one of his scenes and oozes that swagger that convinces you that he could become Billy Dee Williams at the same time as he looks like a younger version. Harrelson always delivers, and he’s one of a few actors that can claim that skill. Clarke lights up the screen when she appears, so it’s not a surprise that Han is completely smitten with Qi’ra. Paul Bettany believably plays a nasty crime lord named Dryden Vos with panache and scratches on his face. Familiar actors appear or provide voices for other characters. It wouldn’t be a Howard film without brother Clint Howard in a cameo or minor role, and it also wouldn’t be a Star Wars film without Warwick Davis in some capacity.

Star Wars fans will find a lot to digest and discuss here from certain lines of dialogue that are common to Star Wars movies — you know the ones! — to the design of the Millennium Falcon. Do we learn how Han and Chewbacca meet? Sure. Do we finally see what the “Kessel run” involves? You betcha. Solo provides a touchstone for some quintessential elements of Han’s future exploits. The collection of alien and human characters on Vos’s ship reminds you of the iconic cantina scene from Star Wars while simultaneously establishing its own unique moments. One keepsake object for Han reappears at key moments as a nice sort of MacGuffin, and an amazing revelation cements the film’s place in the greater Star Wars narrative. Solo clearly earns its subtitle as it generates lots of new characters, locations and events for fans to enjoy and re-create.

Some undeniable problems lessened my enjoyment of what Solo gets right. You would think that the characters would at least pronounce Han’s name consistently. Nope. Even Qi’ra says “Han” the two ways that we’ve heard over the years, and she’s his girlfriend. Big oops there. In fact, why have we never heard of Qi’ra before if she spent so many formative years with Han and shared so many adventures? Lando’s droid L3-37 (perfectly voiced by Phoebe Waller-Bridge) shouldn’t last a day with her constant confrontations with living beings and vocal outbursts, yet her memory doesn’t get immediately wiped. I went into the film expecting an obvious backstory for one character, and it’s noticeably missing to the point where others mentioned it right after the film. Most importantly, the story tires viewers with the constant twists, turns and betrayals. Beckett warns Han not to trust anyone, but the level of deception in Solo rises to farce.

Problems aside, Solo provided many elements that I liked as well. Opening scenes feel ironically like something out of Blade Runner, and the blue tinge in some Corellian locations creates a cool look for the action. Speeder chases, battles and a heist sequence get the blood flowing; I can imagine them as challenges for future video games. Pay attention to the details because what and who appears in the background deliver a fuller film than sparse production design might depict. Obi-Wan Kenobi is expected as the next character for a stand-alone film. Hopefully, the producers learn from this film’s missteps. Solo opens a wormhole for a nice peek at the past and an enjoyable escape for a couple of hours. Can we talk about Lando’s capes?! 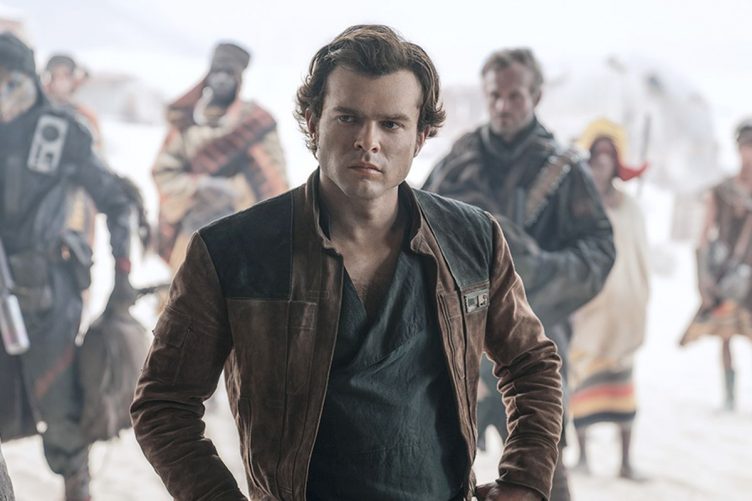