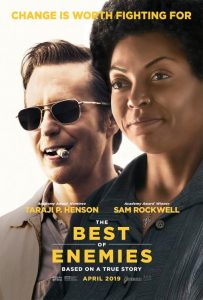 A civil rights activist takes on the head of the local Ku Klux Klan chapter in The Best of Enemies.

Durham, North Carolina, was still intent on keeping their schools firmly and permanently segregated in 1971. Black citizens had little in the way of options beyond sending their children into a school system designed to maintain the superiority of Durham’s white children. Black children were taught in outdated facilities with outdated materials and lagged far behind their white counterparts. Though that sounds similar to the realities we face today, the reasons behind it were much more sinister and brazenly transparent.

Durham’s politics were dominated by racist influencers, many of whom were proud members of the Ku Klux Klan (KKK). Local president C.P. Ellis (Sam Rockwell) had a well-earned reputation for intimidating anyone who, in his eyes, threatened the general order of things. Laws never factored into his brand of justice. Fighting the never-ending battle against the town’s rampant racism was an unlikely hero — an irascible powerhouse of determination named Ann Atwater (Taraji P. Henson). A single mother of meager means and limited education, Atwater focused on the one thing that she had in abundance — an unwavering sense of right over might.

These two diametrically-opposed combatants would end up face to face in a battle of wills to determine the fate of Durham’s segregationist policies. The outcome of their skirmish was something that no one could have predicted.

This true story about the darker history of Durham packs a lesson every bit as pertinent today as it was nearly five decades ago. Henson is nearly unrecognizable as the indomitable Atwater. She embodies the activist’s energy and strength throughout. Rockwell has the easier path, effortlessly playing a slight variation on his role of the dimwitted racist from Three Billboards Outside Ebbing, Missouri. The look of the film is heavy in shades of gray and faded overtones. It blankets the viewer in a continual sense of foreboding and desolation that perfectly fits the mind-set of its core combatants. The supporting cast excels, including a memorable performance from Anne Heche as Ellis’s frustrated but supportive wife. Their efforts create a narrative that sneaks up on you. It’s their handling of the material that gets us to buy into it all.

The writers felt no need to embellish the historical elements of the real story, even though some of them stretch credulity. One area where the writers did fail is providing any real depth regarding Atwater. We know that she’s s a single parent and perpetually pissed off, but we learn very little of her backstory. Another curious oddity is how the local KKK members are presented. The film opens with a scene that leaves little doubt of their ability to destroy lives at will, yet they seem entirely incapable of confronting Atwater. It’s like watching a pool of ravenous sharks circle a wounded tuna without even once baring their teeth. The film’s final scene also feels out of step with the arc of the rest of the plot, and this scene is sure to raise more than a few questioning eyebrows.

Minor missteps aside, this is an unforgettable story where hate, driven by fear and ignorance, is overcome by willpower and understanding. 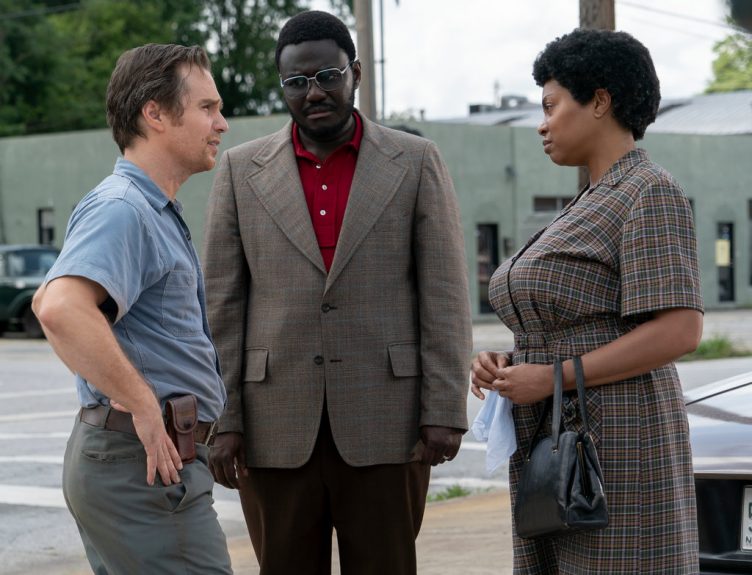