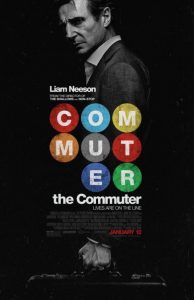 I rode a train into Philadelphia five times a week for 10 years. Over time, I recognized the regulars and where they sat, as well as the conductors and engineers who took us from our suburban stops into the city. If you had told me that someone could be involved in a timed search for a mystery passenger, I would have laughed and scoffed. It’s not easy to get around a crowded train, especially if you want your actions to go unnoticed. The latest Liam Neeson action flick left me feeling the same way. The Commuter mixes action movie conventions with a preposterous plot for an experience that goes off the rails almost from boarding.

Director Jaume Collet-Serra (The Shallows, Run All Night, Non-Stop, Unknown and Orphan) has had Neeson star in three of his previous five movies with varying degrees of success. The Shallows and Orphan were much better films, so maybe it’s time to dump Neeson. First-time screenwriters Byron Willinger and Philip de Blasi join Non-Stop writer Ryan Engle to deliver a plot that keeps you guessing at the same time as you question how ridiculous some scenes and twists are. The Commuter feels too much like a cousin of Non-Stop in which the cast is almost as stuck on a speeding train as the characters were in an airborne plane. Insurance salesman Michael McCauley (Neeson) takes his regular train home from New York City to the suburbs. Settling in for the ride, a strange woman named Joanna (Vera Farmiga) strikes up a conversation and then challenges McCauley to a somewhat impossible task — find someone on the train who doesn’t belong for a cash reward. Circumstances turn dire, and it’s a race against time for McCauley to solve the mystery and get home in one piece.

Don’t get me wrong. I like Neeson, and I enjoyed him in the Taken movies. It’s disingenuous for filmmakers to continually cast him as an everyman with a past and a particular set of skills in de facto Taken-like films. It’s time for both Collet-Serra and Neeson to move on from this kind of story. Nevertheless, Neeson sells the movie as best as he can with his strong acting and demeanor. Although other actors appear in smaller roles, Farmiga stays omnipresent in one way or the other, mostly by phone. Coming off a series run as Norma Bates in Bates Motel, Farmiga shines in her few scenes with Neeson, and the real crime in The Commuter is not allowing Farmiga and Neeson to share more moments like those. Sam Neill, Patrick Wilson and Elizabeth McGovern don’t have more than a couple of scenes apiece; Collet-Serra could easily have avoided padding the cast with them. Character actor Jonathan Banks comes along for the ride as a friendly passenger with a key role.

The Commuter contains a wonderful premise that it ruins by punching the ticket too many times to include required action movie elements. Some terrible fight scenes last longer than most human beings could stand. Plenty of red herrings contrive the plot instead of pacing properly and delivering the goods with a surprise or two. For someone as observant as McCauley, how is it possible that he skips over some of the passengers when he does a walkthrough? Phone service conveniently goes in and out; such connections should be controlled by cell tower positions rather than the writers. Worst of all, Joanna knows way too much about what’s going on aboard the train, and she’s not magical or a ghost.

For all of my complaints, some elements keep the film from completely running out of track. Cinematographer Paul Cameron features some great close-ups of characters and punched tickets to drop clues, and the early shot that pulls back through the entire train establishes the environment in which McCauley must work. The score by Roque Baños heightens the tension at just the right times and adds some oomph to a movie that desperately needs it. Although the middle part bothered me, the beginning and ending were strong. As much as I hoped that I would be surprised, this trip made all of the usual stops along the way after a slow setup. The lesson to be learned in The Commuter slightly modifies common childhood advice — don’t talk to strangers… on a train. 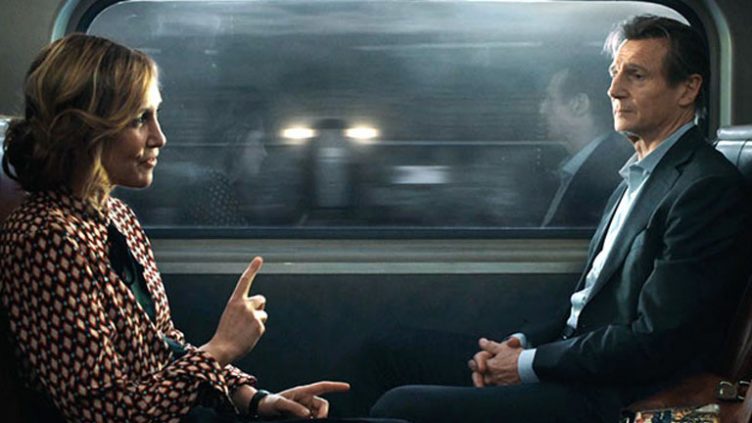