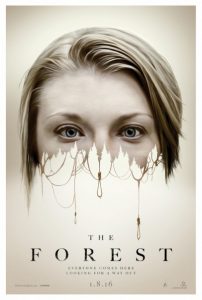 There is a forest at the base of Mount Fuji in Japan called Aokigahara, also known as the Suicide Forest. Rumored to be haunted by the spirits of those who died there, this forest is among the top sites in the world that are popular for suicide along with places like the Golden Gate Bridge. When I read about this location’s history in preparation for seeing The Forest, I thought that it would make a wonderful setting for a horror film. Sadly, this is not the film that I imagined. Much like the activity that occurs in its namesake, The Forest leads you down the wrong path and leaves you stranded in limbo while waiting for something good to happen.

January seems to be the month to dump certain horror movies while all of the good ones get a September or October release. Clearly, The Forest didn’t make the cut for Halloween. First-time director Jason Zada makes a lot of bad choices, and the script from Nick Antosca, Sarah Cornwell and Ben Ketai doesn’t help much with its derivative and unoriginal scenes. Twin sisters Sara Price (Natalie Dormer) and Jess Price (also Dormer, but with dark hair) are separated by thousands of miles with Sara in America and Jess in Japan. When Sara learns that Jess has disappeared near Mount Fuji, she immediately travels to Japan to find her. Sara has no knowledge of Aokigahara, so when she begins to poke around, she encounters scared citizens and is met with strange looks. A travel writer named Aiden (Taylor Kinney of Chicago Fire) befriends Sara in a bar, and together with a guide named Michi (Yukiyoshi Ozawa), the trio set off into Aokigahara to look for Jess.

There aren’t a lot of things to recommend about The Forest. Dormer’s performance is one of them. She impressed me in The Hunger Games: Mockingjay – Part 1, and she has plenty of fans from Game of Thrones. Dormer plays cute and perky as equally well as tough and resilient, and she displays the full range of her acting talent here, especially in the final third of the movie. Dormer bears the weight of the film on her shoulders with its small cast, and she does the best that she can with the substandard content that she was given. Kinney has his good moments, too, in his supporting role, but a late scene that comes off as amateurish and painful to watch will make you forget those earlier bits.

The Forest is slow for so long that any moments of terror are more than welcome. You can only lead an audience on for so long before you have to deliver the goods. I was most disappointed by the lack of focus on the real horrors that take place in those woods. Some people wander off in hopes of dying, while others who are unsure tie a rope or tape through the trees in order to find their way out if they change their mind. These markers also allow personnel to find the bodies more easily if folks decide to go through with their suicides. Images of tape through the trees and memorials to loved ones would create an atmosphere of terror more than any supernatural beings or other imagined frights. While it would have been more terrifying if the filmmakers had shot The Forest in Aokigahara itself and included real images of the landscape, they instead opted for Tara National Park in Serbia.

I’m insulted when directors have characters or creatures like cats jump out at you and come into frame for the pure shock value. Sometimes accompanied by a flourish from an instrument like a violin, this technique may work because you don’t know what to expect, but it’s also cheap and overdone. Most of the frightening moments in The Forest are of this variety, and after the first time, such scenes are repetitive and ineffective. The filmmakers ignored the obvious power of the real forest and instead try to throw as many whammies at Sara as possible as she delves deeper into the brush. It looks like they took all of their lessons from The Ring and ignored better examples of spooky films like The Others, Ghost Story or The Orphanage. This is truly a case of them not seeing the forest for the trees. The special effects for the various spooks and spirits are decent; only the youngest of audience members will have never seen a ghostly girl with one of those gaping maws as she screams at a character. If Sara had met real people who went into the forest to die, their encounters would have been much creepier than a hundred spectral figures in a PG-13 scare fest.

For a number of reasons, The Forest reminded me of the much better As Above, So Below, and that kept it from being a total loss. I don’t think that Bear McCreary will ever be able to top his theme music for The Walking Dead. He doesn’t come close with the minimalist score here, and given the history of the film Halloween, a compelling score might have bumped up the experience a little. One of the legends of Aokigahara is that cruel families left behind aged and sick relatives to wander and die in the forest in a practice called ubasute. Given their lackluster results, the creative people involved with The Forest should have been left in Aokigahara with one ball of twine and a notepad until they emerged with a better story. 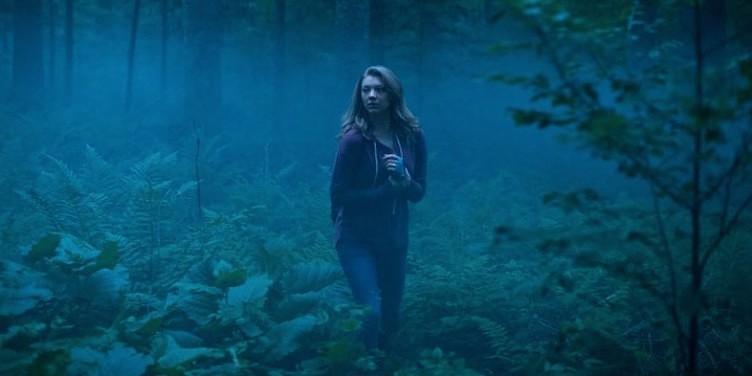