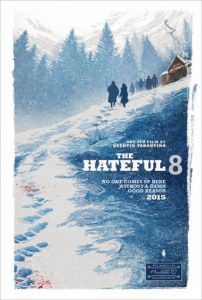 Fans of writer/director Quentin Tarantino know exactly what they’re going to get served when they enter a theater. Certain directors like Tarantino (Pulp Fiction, Inglourious Basterds and Django Unchained), Terrence Malick (The Thin Red Line and The Tree of Life), Jean-Pierre Jeunet (The City of Lost Children and Amélie) and Wes Anderson (Moonrise Kingdom and The Grand Budapest Hotel) have distinct styles and ways of presenting a story that are as identifiable as their fingerprints. For Tarantino, his films involve bloody violence, rampant vulgarity, well-placed music, memorable screwball characters, long conversations and lots of surprises that are all wrapped in a story that is usually broken into segments/chapters and revealed out of sequence. Perhaps his most ambitious work to date, The Hateful Eight is a supersized Tarantino experience that would taste just as good in a smaller portion.

Much like the characters, the plot is simple on the surface and has so much more to discover on the levels beneath. Bounty hunter John Ruth (Kurt Russell) is traveling to Red Rock via stagecoach in the late Nineteenth Century to deliver wanted prisoner Daisy Domergue (Jennifer Jason Leigh) to the hangman for the $10,000 price on her head. In the middle of a furious Wyoming blizzard, the two passengers and their coachman O.B. (James Parks) encounter first another bounty hunter named Major Marquis Warren (Samuel L. Jackson) and then purported new Red Rock sheriff Chris Mannix (Walton Goggins). Both men convince Ruth to save them and transport them to Red Rock, but the blizzard forces them to take refuge in an occupied haberdashery where they encounter four more men who help comprise the title. (O.B. really makes a ninth, but this is Tarantino’s eighth film, so he doesn’t count him in the title.)

Bob the Mexican (Demián Bichir) is a gruff man who doesn’t say too much. Oswaldo Mobray (Tim Roth) is an Englishman with a delightful way of speaking that makes him one of the most fun characters in the movie. Joe Gage (Michael Madsen) is a cowpoke who writes down everything that happens. Is he perhaps a stand-in for Tarantino himself? Finally, Civil War veteran General Sandy Smithers (Bruce Dern) is a nasty racist who bites back when provoked. Put all of these characters in a one-room cabin in a blizzard, add guns and slowly reveal multiple hidden agendas, and you have a powder keg that’s likely to explode at any minute. Like some of Alfred Hitchcock’s best dramas, The Hateful Eight plays out like a game of Clue. It’s no accident that the film bears many similarities to The Thing, one of Tarantino’s influences, as well as horror flicks like Alien and any number of Westerns. Tarantino’s broken narrative delivers punches to the gut with maximum effectiveness as secrets are revealed and the final act ramps up the horsepower.

The cast is a delight because it mixes familiar faces from previous Tarantino films like Jackson, Roth and Madsen with newcomers Russell and Leigh. Across the board, the cast is excellent, and that’s hard to pull off for most actors and directors. Even among these talented cast members, some stand out. Jackson earns every bit of his position as lead in this movie, and he fully inhabits Warren and makes you forget those Capital One commercials. Leigh takes a lot of abuse and still manages to hold her own against her costars with a singular bad attitude and a smile on her face among the muck and hard conditions. I last remember Dern in Nebraska as a crotchety old man, and he somehow increases his sneer and venom while almost never leaving his seat. Russell’s performance is transformative as he shifts from the nice guy and hero whom we’re used to seeing to a nasty gunslinger with a singular purpose who gives many slaps and punches to Daisy. Her perpetual black eye shows his impatience. Much was made of John Travolta’s work in Pulp Fiction. I’d put Russell’s efforts on that level, and I hope that Tarantino can draw him into a future production.

Two significant contributions are additive to Tarantino’s directing. With an opening on a snow-covered mountain and many vistas of blizzard conditions, cinematographer Robert Richardson captures both the beauty and the danger of all of that snow and a handful of people and locations as specks against it. Richardson has worked with Tarantino before as well as movies like The Aviator, Hugo and Shutter Island. I swear that I felt a chill throughout the entire screening, and the images have a lot to do with it. The Hateful Eight was shot in the Ultra Panavision 70 process (65mm film with lenses to bump up the aspect ratio to 2.76:1) and then printed on 70mm film as well as digital formats. The result is lush, beautiful scenery that puts you in the middle of the action. Music is essential to Tarantino’s productions, but in most cases, that music consists of pop songs on the soundtrack. Legendary composer Ennio Morricone wrote the original score for The Hateful Eight, and his music both cements the film’s position among a heritage of iconic Westerns and produces sounds that perfectly complement the action and even the quieter parts. Ear-splitting crescendos hit the hardest at key moments. Perhaps they’re overkill, but I really didn’t mind.

As great as The Hateful Eight is, there are some places where less would be more. Four-letter words are sprinkled throughout most of Tarantino’s movies; that’s just the way that his characters speak. Take it or leave it. Although it’s possibly historically accurate, I was instead surprised at the rampant usage of the word “nigger” throughout the film. Tarantino certainly has the writing skills to include fewer instances of this word for maximum impact. Perhaps he was trying to lure Spike Lee into a feud, but the liberal usage of the word in almost every conversation comes off as juvenile, showy and unnecessary. The Hateful Eight is also guilty of being too talky at times and a bit long in the early segments. Although I enjoy such scenes in his movies, others could easily get bored or disinterested in the plot as characters wander in different directions with their speeches. When done right — e.g., the conversation about burgers in France from Pulp Fiction — this technique is a fun bonus.

A few minor missteps keep me from elevating the movie even higher. It annoys me when actors mispronounce a word straight into another word, and “cavalry” is pronounced both properly and as “Calvary” a few times. Didn’t these actors do script readings and multiple takes? As much as I love Jackson’s performance, the hair and makeup folks took him back to the 1800s but left his teeth unbelievably white and perfect. I wouldn’t normally call that out; so many scenes with him laughing or yelling made it obvious. A number of surprises and reveals are part of the fun of The Hateful Eight. One of the cast members in the opening titles should really have not been listed until the credits for some extra oomph with his entrance. Instead, I kept waiting for him to show up, which is distracting as you’re mentally trying to follow and solve what’s going on.

For those of you lucky enough to be in select cities, The Hateful Eight was released in a Roadshow version that really takes the moviegoing experience back to the grand old days of cinema. All attendees get a snazzy program full of great images from the movie as well as a cast list and other info about the film. With a running time over three hours, Tarantino added a three-minute overture with Morricone’s music playing against a static background and an intermission about two-thirds through the film. The intermission is slightly too short at about 10 minutes, so rush quickly if you want to get more popcorn or make a bathroom run. More importantly, the producers spent a lot of money to retrofit the Roadshow theaters with projectors to play the 70mm print. This step back in time fits The Hateful Eight the best, but those who see the digital version in its wide release will still get a memorable experience.

The Hateful Eight is pure Tarantino from start to finish. There’s plenty of blood and gore for those who aren’t too squeamish. A lot of the violence elicits laughs as well as shock in a wonderful juxtaposition of emotion. There are thankfully fewer songs on the soundtrack, which emphasizes Morricone’s music even more. Humor is a strong component of Tarantino’s oeuvre, so expect to laugh both out loud and even a little nervously as some scenes are outright silly and others are just over the top for the circumstances. Much like the long stagecoach ride to Red Rock, The Hateful Eight is a slow-burning experience that delivers you to its final destination bumped, scraped and perhaps richer for the effort. 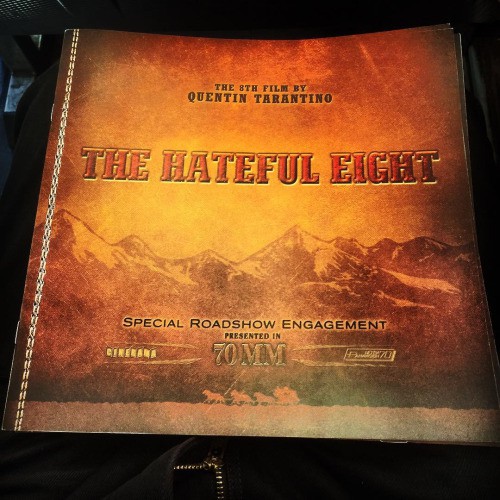 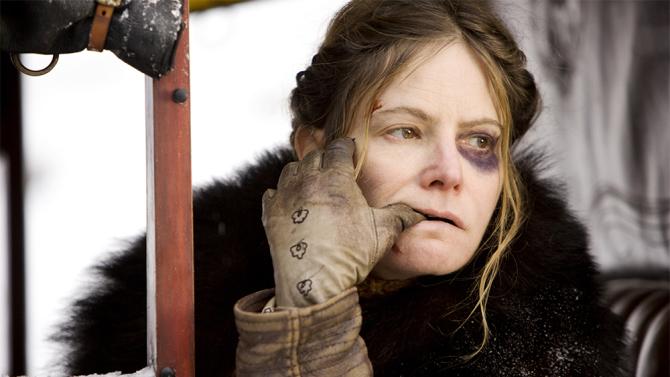