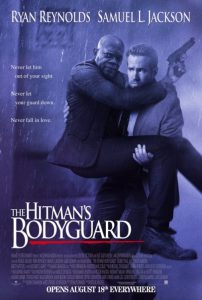 Some actors will always make the perfect half of a dream match-up. The prolific and chameleon-like Samuel L. Jackson could improve any team or duo. The version of Jackson who curses and blows up stuff a la Pulp Fiction or Snakes on a Plane increases the entertainment value that much more. Ryan Reynolds definitely ranks on the list of perfect partners with Jackson. Reynolds provides snark and sarcasm as counterpoint to Jackson’s brash confidence and explosive personality. The Hitman’s Bodyguard delivers on its promised action and comedy with more than enough of both to protect your movie dollar.

What’s most surprising and encouraging about this flick is that the filmmakers have few credits and still manage to pull this hit out of their bag of tricks. I enthusiastically look forward to their next collaboration. Director Patrick Hughes cut his teeth on Red Hill and The Expendables 3, while writer Tom O’Connor’s only other listed writing credit is Fire with Fire. The Hitman’s Bodyguard uses the action-comedy format as a reason to throw together Jackson and Reynolds and watch the fireworks fly. Interpol agent Amelia Roussel (Elodie Yung) contacts professional bodyguard Michael Bryce (Reynolds) to transport killer-for-hire Darius Kincaid (Jackson) from London to The Hague in about a day. Jackson plans to testify against ruthless dictator Vladislav Dukhovich (Gary Oldman) for crimes against humanity, but he needs to survive to make it to court. Dukhovich’s cronies attack Bryce and Kincaid from all sides, and they might just kill each other if the bad guys don’t get them first.

This movie only succeeds because of the chemistry between Jackson and Reynolds. Their repartee and perfectly timed banter balance the action scenes and chases so well that there’s almost never a dull moment. Some of these exchanges can be shown in the trailer, but the majority of them are R-rated and full of vulgarity, insults and even more vulgarity. The characters’ history figures heavily into their arguments, and like it or not, they need each other for this raucous road trip. Reynolds’s star rose a lot higher with Deadpool, so an action-comedy with Jackson feels like a reward for both him and the audience.

The action scenes do not simply follow traditional templates. The filmmakers keep their characters on their toes by forcing them into situations where safe passage requires extra effort and no acquired vehicle lasts too long. This means nonstop action with the only down time as those wonderful dialogue scenes between the stars. The improvised forms of transportation lead to more creative action sequences. A notable scene involves a boat in the water and a motorcycle and cars on land for an expertly crafted chase that leaves you breathless.

Although Yung and the always welcome Joaquim de Almeida hold their own with their Interpol characters, The Hitman’s Bodyguard contains one nice cameo and two surprising scene stealers. Salma Hayek portrays Kincaid’s wife Sonia, and her mouth and attitude are just as bad as her husband’s, if not worse. Hayek’s scenes kept me in stitches. On the dramatic side, Oldman’s deliciously evil Dukhovich adds to his long list of memorable characters. Sure, he’s a bad guy, but I would have liked more of him here to bump up his role to more than the antagonist to the leads.

Although I wanted a funny action movie and got exactly that, there were just a few minor issues that kept this film from the higher tier of action-comedies. Oldman needed at least one more major scene to establish Dukhovich, especially because Oldman commands your attention when on screen. Some reckless actions by Kincaid lead to more comedy but don’t ring true to his training. He can’t be a killer who avoids death one minute and a sloppy character who jeopardizes himself in another. When a plot involves a time limit, I hate hate hate when writers feel the need to turn the last minutes of that time limit into drama that doesn’t mirror reality for those situations. O’Connor does that here, so it’s a movie convention that you just need to ignore if you can.

Let’s hope that Jackson and Reynolds team up again with these characters or others. I change the channel when Jackson’s Capital One commercial comes on in which he’s singing. He actually carries a tune here, including a new song called “Nobody Gets Out Alive” that he wrote and recorded for this movie. I didn’t check the final count, but there might be a record of the uses of the curse word that begins with “mother,” some of which are delivered by Hayek as well as the leads. This sounds like a future drinking game. Like the excellent In Bruges before it, The Hitman’s Bodyguard merges European locations and sights with constant action and laughs to knock you down and leave you wanting more. 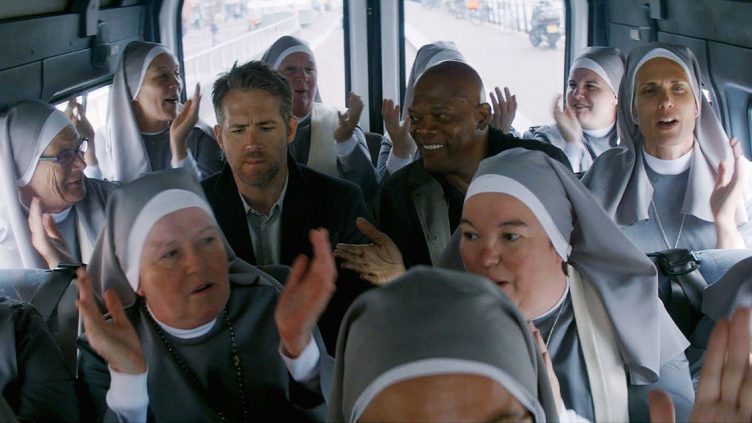