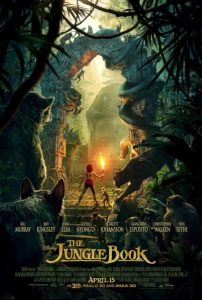 If you had told me that Disney was going to produce another live-action version of The Jungle Book, I would have rolled my eyes in my best cartoonish way. If you further explained that it would not be a musical comedy and that Jon Favreau would direct it, I would have called it a bad idea. Once again, here’s proof that you should enter a movie with an open mind and put your experience in the hands of the filmmakers for a couple of hours. It won’t always work out, but in the case of this remake, the results are far different than what I expected. The Jungle Book is a compelling, exciting and occasionally scary adventure that reinvents the familiar story of Mowgli with modern technology and smart casting.

I have never read Rudyard Kipling’s original text that led to its several adaptations. I can’t comment on how close this remake is to the original story or even to the animated version. However, it comes off as a grand adventure, especially if you’re a little boy with a wild imagination. Director Favreau (Elf, Iron Man, Iron Man 2 and Cowboys & Aliens) and writer Justin Marks (Street Fighter: The Legend of Chun-Li) deliver the story of Mowgli (newcomer Neel Sethi), an orphaned Indian boy who lives in the jungle with the pack of wolves that adopted him, his overseer Bagheera the panther (voiced by Ben Kingsley) and his other animal friends. When vicious tiger Shere Khan (Idris Elba) breaks a truce among the animals, Mowgli runs away from the pack to avoid the tiger and his murderous intentions. During his exile, Mowgli encounters Kaa the serpent (Scarlett Johansson), Baloo the bear (Bill Murray) and King Louie the Gigantopithecus (Christopher Walken) — not an orangutan in this version because they’re not native to India. Each of these creatures expands Mowgli’s world and experiences in a different way before he comes full circle for a dramatic finale.

When I first saw the trailer for The Jungle Book, it appeared to be the Babe version of the animated movie with talking animals and one main human actor. The only element that both films truly have in common is that the human actor does an amazing job in convincing you that the animals are as alive for him as they are for an audience. In the case of Babe, the digital effects were advanced enough to only pull off moving digital mouths superimposed on real animals. It’s breathtaking to know that there are no real animals in The Jungle Book and that they are all digital performances. James Cromwell earned an Oscar nomination as Farmer Hoggett for his work, and Sethi is that good as the lithe, athletic protagonist who emotes with and reacts to the digital creations as if they were in front of him.

The voice cast is just as important to sell the illusion. It could otherwise come off as hokey; The Country Bears comes to mind. Kingsley’s calm, encouraging voice is perfect for Bagheera, and Kingsley has the added job of narrating the movie. Elba is positively frightening as Shere Khan, and that menacing aspect of his character may be too much for little kids. The PG rating is appropriate. Johansson only has one major scene, but if I encountered a serpent who sounded like her, I might end up suffocated in her embrace as well. Murray could have gone very wrong as Baloo, but in the end, Murray’s aloof, laid-back personality comes through in his voice as a wonderful buddy for Mowgli. Walken was the voice that I was worried about the most because we’ve come to know King Louie as a jovial, larger-than-life character. Instead, Walken plays King Louie like a mob boss with monkeys for minions as if he drew on his role in Suicide Kings and reinvented this character. Mowgli approaches King Louie in his temple, and he sits on a throne much like Jabba the Hutt as he towers over Mowgli and tells him what he wants. Walken fans will love it, and others should find this off-the-wall casting as oddly entertaining. Lupita Nyong’o and Giancarlo Esposito voice Mowgli’s adoptive wolf parents, and Garry Shandling performs Ikki the porcupine in one of his last appearances.

The last movie that involved an Indian male and a digitally produced tiger bored me to tears. Yes, I’m one of those few people who disliked Life of Pi. I would instead compare The Jungle Book to Dawn of the Planet of the Apes in that the quality of the digital animals is astounding. Beyond the complex rendering of the animal stars, the landscapes are absolutely gorgeous. I thought for sure that some of the outdoor scenes had been shot on location. Nope. The entire movie was filmed on soundstages in Los Angeles with digital technology, green screens and green surfaces for sets. Sure, there were props (trees, rocks, etc.), but not even Sethi really knew what his surroundings looked like until the CGI processing took place. The result is a work of art and a high achievement for Favreau to bring the strong performances and digital creations together frame by frame. As something else to spot when you see the film, there’s even a nice visual reference to a sequence from The Lion King. Stay for the credits, too, because it’s a fun, creative sequence that presents aspects from the film in a compact format.

People might expect to hear the familiar songs from the animated movie here. This is no musical, so there are only snippets of “The Bare Necessities” and “I Wanna Be Like You” instead of rousing song-and-dance numbers. That’s fine by me because this is a serious movie with Mowgli and the audience on an emotional roller coaster. That’s not to say that there aren’t moments of comic relief as well. The younger and smaller animals are cute, cuddly and full of energy. They will elicit a chuckle or two to break the tension when they appear. The Jungle Book surprisingly succeeds in its bold new direction and technological mastery. 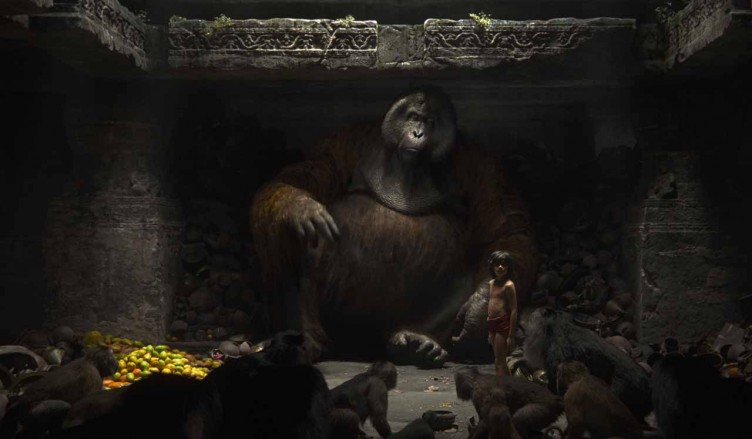