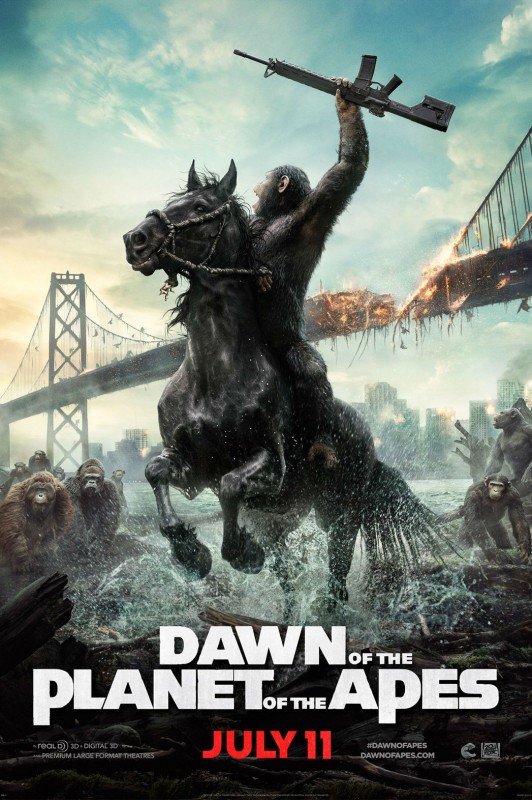 Whenever I think of “talking monkeys,” I immediately call to mind the 1995 movie The Prophecy in which Christopher Walken and Viggo Mortensen used that term to disparagingly refer to human beings. (I often find that stupid or annoying people whom I encounter are no better than talking monkeys.) This term takes on an entirely different meaning in Dawn of the Planet of the Apes and its predecessor, a pair of films that offer a captivating, fascinating look at the progression of the apes’ dominance over humans on Earth. I expected the special effects to be phenomenal and the story to explain more about the evolution of these apes. I was completely caught off guard by other elements. Dawn of the Planet of the Apes not only makes huge strides in the story of the apes, but it also demonstrates a turning point in the evolution of digital characters.

This is a movie where a number of disparate elements come together exactly right for a pretty amazing experience. Director Matt Reeves created Felicity and later moved on to cowrite and direct The Pallbearer, write and direct Let Me In and direct the ambitious Cloverfield. Writing team Rick Jaffa & Amanda Silver also wrote Rise of the Planet of the Apes, so there’s some consistency to the ape characters and world. Cowriter Mark Bomback also cowrote the Total Recall remake and The Wolverine. Reeves certainly had a hand in getting Felicity star Keri Russell to join the cast, and Andy Serkis must have transferred some of his techniques for motion-capture performances to his fellow cast members. Michael Giacchino hooked me with his music for Lost, and I’ve been following him diligently since then. This is one of his more impressive scores, and it perfectly captures the mood in so many dramatic scenes.

The plot conveniently takes place 10 years after the previous story with the apes living in the woods and the remaining humans struggling to live in the ruins of San Francisco after the simian flu wiped out most of them. Caesar (Serkis providing the voice and performance) is the leader of the apes, while Dreyfus (Gary Oldman) guides the humans. After Carver (Kirk Acevedo of Fringe) impulsively shoots Caesar’s son, Blue Eyes (Nick Thurston), in the woods, the apes aren’t too happy with the humans. Dreyfus sends Malcolm (Jason Clarke), Ellie (Russell), Malcolm’s son Alexander (Kodi Smit-McPhee of The Road and Let Me In) and others through the woods to fix a dam so that the humans will have power once again. Caesar is a thoughtful ape who realizes that Carver’s shot was an accident, so he grants passage to the humans and even sends some apes to help them get done faster. Cooperation doesn’t sit well with a bonobo named Koba (Toby Kebbell), Caesar’s second in command, who was scarred by the humans’ experiments and wants nothing to do with them. Another incident splits apart the warring factions among the apes, and things just get worse as a war erupts between the apes and the humans based on some lies made by the evil Koba.

The plot feels like works out of Shakespeare or the classic stories of Greek or Latin literature. The rivalry between Caesar and Koba could even be compared to something like The Lion King with Scar angling for the top spot against Mufasa and lying to the king’s son Simba just like Koba messes with the head of Blue Eyes. I really never expected something so deep from a movie in this series. In fact, I would argue that the humans are actually supporting characters here, as evidenced by Serkis’s top billing in the cast. Judy Greer doesn’t have a lot to do here as Cornelia; I hope that her role is expanded in the sequel. Karin Konoval as the orangutan Maurice and Terry Notary as the older chimp Rocket have more prominent roles than Greer and certainly add more variety to the cast of ape performers. The drama is strong enough with the apes that I would have been perfectly happy if they had little or no interaction with the humans instead of the action-packed war that comes late in the movie. 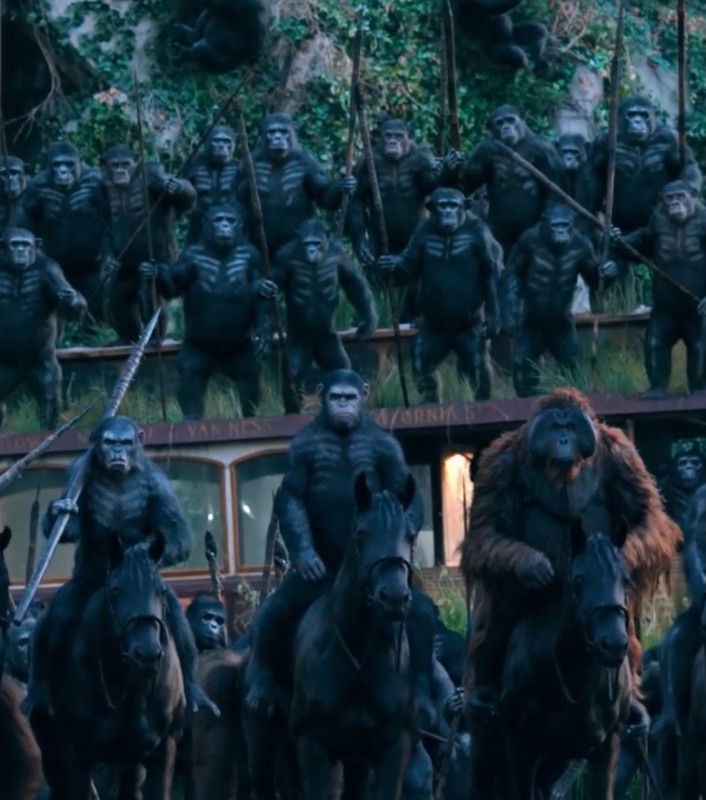 The key element that took this experience to that next level was the amount of emotion and believability conveyed by the digital characters. There are landmarks in movie history with the development of computer graphics, specifically when it comes to producing all-digital characters. Avatar was a major step, and it’s no surprise that Serkis was responsible for the second major advance — Gollum in The Lord of the Rings. Invariably, people cited Gollum and Serkis when they discussed that fantasy series. Although Gravity expanded the use of digital environments, the technology has made another quantum leap with all of the apes in this outing. I don’t know the specifics of the special effects, but the combination of the motion-capture technology, the banks of computer renderers, the amazing depth in the eyes and the outstanding acting all comes together to draw you in and make you feel the emotion of the scenes. I would not have thought that we were that close to empathizing for computer generated characters, but I was convinced by the filmmakers. Some scenes between Caesar and Koba are as impactful as any work you would see from Oscar-caliber actors.

Even with all of my compliments, I still found some faults in the mix. Although it didn’t bother me that much, it might annoy people that these talking monkeys aren’t exactly talking just yet. They’re still at the stage of using sign language, so most of the scenes with the apes are subtitled. This certainly makes for a unique foreign language film! The final third of the movie abandons much of the drama from earlier and turns into a formulaic action film with predictable outcomes. It’s not terrible by any means, but I expected more after the wonderful plot choices and writing that were exhibited earlier. Dawn of the Planet of the Apes also marks the dawn of an even more exciting time in the movie industry. The tagline for Superman was “You’ll believe a man can fly.” The tagline for this film could be “You’ll believe a digital character can act.”