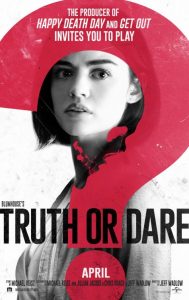 A group of carefree friends accidentally unleash a deadly curse while playing Truth or Dare.

Olivia Barron (Lucy Hale) and five of her best friends head to Mexico to celebrate their final summer break together. While unwinding at a bar, Olivia befriends a mild-mannered stranger, Carter (Landon Liboiron), after he rescues her from the unwanted advances of another patron. Carter convinces the group to join him at a remote abandoned mission where they can close out the night together in privacy. Once gathered among the ruins, the friends are surprised when Carter suggests that they play a simple game of Truth or Dare. It all seems harmless enough until someone challenges Carter to tell the truth. With a sudden seriousness, he explains that the game is cursed and that, if the friends deviate from the game’s rules or try to stop playing, they’ll pay with their lives.

None of the group puts much stock in an ominous warning from this oddball stranger until horrible accidents start to change their minds. As the reality of their situation takes hold, the stakes of the game grow. Each new challenge puts the friends in ever more dire situations. Every truth exposes long-hidden, damaging secrets, while every dare becomes more deadly. Will the friends find a way out of this cursed game before it consumes them all?

Blumhouse Productions is like a stock trader with a preference for junk bonds. To date, none of their nearly 70 films have cost more than $10 million dollars to make with most costing less than half that amount. They know that their audience will turn out in high enough numbers so that even their riskiest projects will likely make money. When they hit big — as they did with Get Out, Split or the film that launched the studio, Paranormal Activity — the haul is monumentally huge. The downside to such a business model is that audiences need to endure crappy little films like Truth or Dare.

The trouble starts (and possibly ends) with the movie poster. Take a look at the writing credits: “Screenplay by Michael Reisz and Jillian Jacobs & Chris Roach & Jeff Wadlow.” Seriously? It looks like the writers spent more time arguing over their credits than they actually took writing this mess. It should not have taken four writers to pen a simple horror film with throwaway dialogue. What they did manage to scrawl out between debates over billing is entirely nonsensical. Consider the story’s main buy-in — that any group would blindly follow a complete stranger… in a foreign country… in the dark of night… far off the beaten path… to a run-down, deserted building. Uh-huh. The audience also quickly realizes that everyone could survive if they all just choose truth over dare. Truth may be embarrassing, but it won’t get you killed. The film lets us stew over this obvious loophole for about half its running time before introducing a completely contrived change to the rules to prevent that very scenario. So let me get this straight. The friends all must agree to play a game for this curse to work, but they don’t get to actually know the rules of the game that they’re playing? Sign me up!

Beyond the writing, nothing improves. In the lead, Hale is somehow overmatched by the pedestrian material. Her character and that of her supposed best friend spend the entire film challenging the audience to figure out how they ever managed to stand each other in the first place. The male characters are mostly indistinguishable from one another. When something happens to one of them, we’re not exactly sure who was impacted. It’s the kind of film that makes us wish that all of the characters would end up dead in a grand Darwinian gesture of goodwill.

The harshest truth of all is that this dare of a film will likely make a nice tidy profit. Ah, the wonders of capitalism. 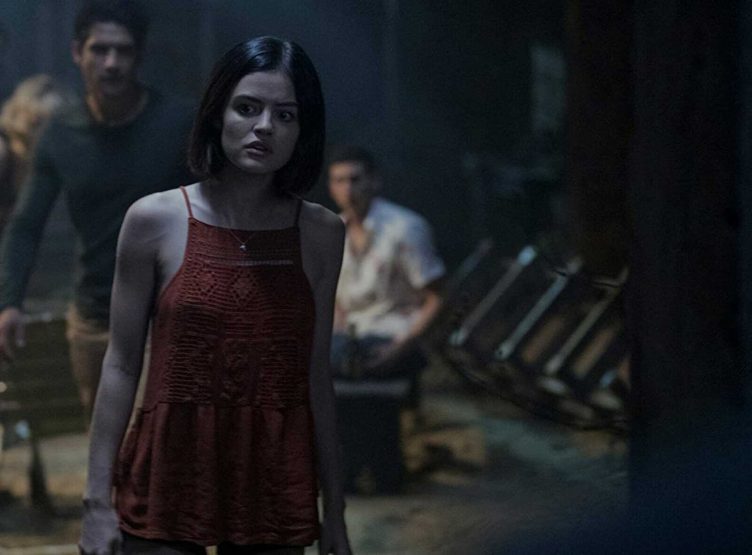