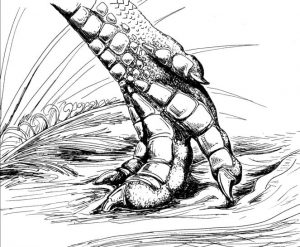 Here’s the post that you’ve all been waiting for! This is the second-to-last post in my Brief Overview series, and it finally includes many of the most popular dinosaurs — the theropods. This large group includes all known carnivorous (meat-eating) dinosaurs such as Velociraptor and Tyrannosaurus rex as well as several very strange groups that reverted to eating plants. But wait, there’s more! This is also the group of animals that includes birds! Every bird that has ever lived and will ever live is a dinosaur. Before we make our way through this group, allow me one caveat: Theropoda is a very large and diverse group, and our understanding of the relationships within it are constantly changing. While I’m focusing on broad strokes, even those details may have changed since I last read about the group. Also, because it is such a large group, I am going to focus on the base of the evolutionary tree in this article, and we’ll get to things that are closer to birds in the next one.

Now, this is one of the bigger groups of dinosaurs, so I’m going to break things down a little further for everyone. Let’s start at the beginning. The group Theropoda was named by O.C. Marsh like several of the other groups that we already discussed. The name is derived from Greek and means “beast foot,” although I can’t explain why Marsh decided that this name was most applicable for this group any better than I can explain why he picked “lizard foot” for sauropods and “bird foot” for ornithopods. The earliest members of this diverse group looked very much like the very earliest dinosaurs — so much so, in fact, that there is quite a bit of debate over which animals in particular represent generic early dinosaurs and which ones are truly early theropods. All of these animals were relatively small (human-sized or smaller), gracile bipeds, including creatures like Dilophosaurus that you may recognize from Jurassic Park. (Please realize that there is no reason to think that they spat venom.) 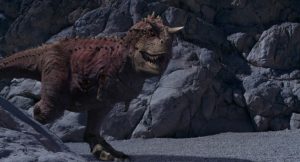 Carnotaurus from the Disney movie Dinosaur

As we move up the tree, we discover a number of different groups that each developed a very large size independently of one another. The first of these groups is called Ceratosauria. It includes a group of giant theropods from the southern hemisphere that are known for having the most extensive reduction of the arms of any known dinosaurs, much more so than is seen in T. rex. The most well-known example of these is Carnotaurus. These carnivores were portrayed as the villains in Disney’s Dinosaur (2000).

The next group of giant predators are the spinosaurs, including the eponymous Spinosaurus, which has the distinction of 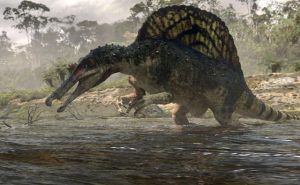 currently being the largest predatory dinosaur known to science (both in length and in weight). Spinosaurus is also famous because of appearing in Jurassic Park III. There was a bit of a scientific buzz in the past year or two related to new specimens found for the first time since the original specimen was destroyed during World War II. There has also been some interesting talk related to whether these new specimens revolutionize our understanding of this animal — one interpretation of these fossils turns Spinosaurus into a quadrupedal semiaquatic animal similar to a crocodile — but I’m not going to get into that very much here. I’ll simply say that, regardless of the status of Spinosaurus itself, all of its closest relatives were most likely giant bipedal fish-eaters. 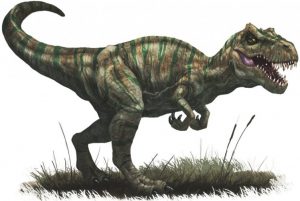 This brings us to the last group that I’m going to mention in this article — Carnosauria. Once upon a time, when theropod relationships were far less understood than they are now, the tree was mainly broken into two groups. Coelurosauria was the name given to the group that had all of the small theropods, and Carnosauria (“meat lizards”) was the group of giants. This understanding has been taken apart and put back together in a way that is much more satisfactory to us today. Coelurosauria is the group that I will discuss in the next article that includes everything higher on the tree than Carnosauria. On the other hand, Carnosauria is still a group of giants, but it is by no means the only one. By far the most famous carnosaur is Allosaurus. When I was little, I thought of Allosaurus as the “small T. rex that lived in the Jurassic Period and had three fingers instead of two.” The many subtle differences between Allosaurus and T. rex notwithstanding, it’s not a bad description. However, the other animals that share the title carnosaur with Allosaurus are much more impressive. Most of them fall into a subgroup called Carcharodontosauridae, which means “shark-toothed lizards.” The largest of them (Giganotosaurus) is one of the largest theropods to have ever lived, possibly larger than T. rex. The carcharodontosaurs generally come from South America, and it is thought that they mostly hunted the giant titanosaur sauropods that dwelt there.

As I mentioned, all of the rest of the theropods, from T. rex to Velociraptor to all of the thousands of species of birds, fall within the group called Coelurosauria, which I’ll cover next time as I finish up this overview series.