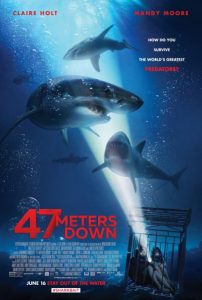 Let’s get one thing straight. Jaws ranks as the best movie about a killer shark, and Jaws 2 is the only other movie that comes close. There have been notable variations on the theme over the years, and let’s not forget Sharknado and its sequels. Given the legacy of Jaws and Jaws 2, I have low expectations about any movie that’s advertised as a killer shark flick. I’ll also admit when I’m pleasantly surprised. Despite a misguided marketing campaign and some quirky choices by the filmmakers, 47 Meters Down steals your breath away as it offers thrills galore in its underwater setting.

Cowriter/director Johannes Roberts and cowriter Ernest Riera previously teamed up for last year’s The Other Side of the Door. With backgrounds in horror, the filmmakers certainly have the moxie to take an unoriginal concept and create something very different. Fortunately, 47 Meters Down delivers on that promise. After about a half-hour of setup, the main plot kicks in as sisters Lisa (Mandy Moore) and Kate (Claire Holt of Pretty Little Liars and The Vampire Diaries) decide for some insane reason to dive in a shark cage while on vacation in Mexico. They’re only supposed to descend to 5 meters for a few minutes. As the title indicates, they don’t stay at that depth too long as an accident with the cage takes the sisters down to 47 meters out of radio range to the surface and low on air.

With a minimal cast, Moore and Holt bear the load of the acting and command your attention. The young actresses are believable in both their relationship as sisters and their mutual terror. Matthew Modine inexplicably appears as the grizzled Captain Taylor. He’s not as out of place as I thought that he would be when I saw his name flash on the screen during the titles, but his Bret Michaels-like bandana needs to swim with the fishes. With most of the action taking place underwater, including even the opening scene, Moore and Holt deserve extra praise for the laborious process that’s involved in filming those scenes. I don’t know how much of the scenery or the sharks were generated as computer graphics. The final result is an underwater movie that’s as visually stunning as it is exciting with the two actresses selling it all.

I wish that Roberts had shortened the setup time even more to get right to the action. We don’t need another shark movie, so it’s good that 47 Meters Down features air tanks as the real nemeses. The sharks are an added bonus for those who weren’t already unsettled. The filmmakers establish chirping air gauges early on that make noises at key inopportune times, so these air gauges act as effective MacGuffins. The gauges also have numbers to count down how much air is left, which heightens the tension with each dropping number. I was enthralled from the moment that Lisa and Kate entered the water. That’s tough to do when your mind devises all kinds of events and outcomes before you even enter the theater. The perfect music by tomandandy enhances the experience.

I don’t know anything about scuba diving. Others in the audience had dived before and thought that little details weren’t completely accurate; that didn’t bother me one bit. I never knew that divers could use wireless technology to communicate underwater. This one element that seemed to be made up for the plot turned out to be true. Only a little bit of blood attracts sharks and other predators in the ocean. There should have been more sharks around given some of the events in the movie, but instead, the sharks hang around in the shadows until it’s convenient. Revelatory dialogue akin to narration ruins the film at times. You don’t need to hear “the shark almost got me” when you just saw it happen. Modine’s comments from the surface equally distract in some scenes.

Just when you think that things are getting better for Lisa and Kate, another calamity waits behind some seaweed. A rickety old boat and rusty cage should have been the first indication, but movie characters often do stupid things. The filmmakers will certainly affect audiences with this fun summer movie. I’m convinced that I never want to go scuba diving or swim with sharks after watching 47 Meters Down. 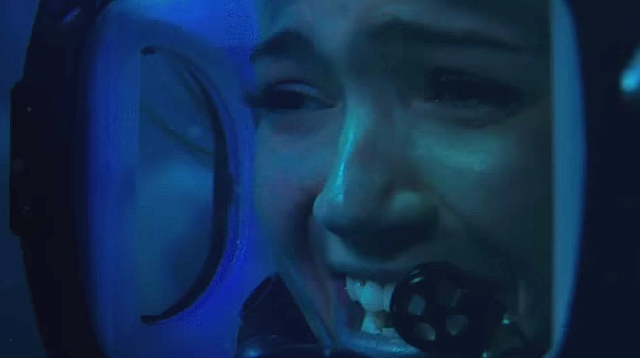