Is there such a thing as too much money? I don’t think so, but I’d be happy to try to answer that question through firsthand experience. Many movies examined this theme of greed and corruption over the decades. Such subject matter gains even more importance when it involves the operations of the U.S. government and historical events that are almost too outrageous to be believable. American Made details the experiences of one man tempted on all sides by the almighty dollar and will certainly mint its own mountain of money with its rich blend of comedy, drama and biography.

Director Doug Liman has worked on some of my favorite films, including Swingers, Go, The Bourne Identity and Mr. & Mrs. Smith. Additionally, he directed Tom Cruise in Edge of Tomorrow, a good sci-fi flick that they’ve since rebranded with an awful new name. Screenwriter Gary Spinelli has only a few credits to his name, yet his script’s structure and flow feel more like the work of a seasoned professional. These filmmakers struck gold with a story that captivates you from the start and keeps you holding on tight as if on a drug smuggling plane going out of control.

Barry Seal (Cruise) monotonously flies planes for TWA in 1978 and makes a little money on the side for his growing family by sneaking in a few Cuban cigars. Too cocky to understand that he might be watched, Seal takes the bait when CIA handler Monty Schafer (Domhnall Gleason) dangles riches in front of his face to avoid legal problems. The agent plans to cultivate Seal’s unique set of skills as a talented pilot with a taste for danger and lawlessness who always delivers. Soon, Seal graduates from taking pictures for the CIA with a hi-tech plane to making deliveries, and it only grows from there as the money piles up and Seal lies to his wife Lucy (Sarah Wright). Before long, Seal makes frenemies with the Medellín Cartel in Colombia and expands operations back in the U.S. American Made follows Seal’s ups and downs in the ‘70s and ‘80s as a puppet of the CIA and trusted smuggler to the drug kingpins and elicits laughs as you easily guess where this is all heading.

This movie features that smarmy, smiling version of Cruise who can make or break a project. In this case, it works beautifully. I don’t know how close this characterization matches the real Seal, but I enjoyed Cruise’s performance at the heart of American Made. The other two leads (Gleeson and Wright) strike a perfect balance as the two primary influences on Seal pulling on either side of him. Gleeson’s role comes off as a sort of devil in that he constantly tempts Seal with further money and activities and protects him from the law and other forces so that it’s too easy to give in. Gleeson gleefully inhabits this CIA mystery man. Seal’s wife Lucy represents why her husband initially wants to make more money and keeps him somewhat grounded. Wright handles the wife role well and makes a lasting impression that will lead to greater roles in the future.

American Made entertains on so many levels because it mixes essentially a caper film with some real-life characters and circumstances and then couches it all in comedy. The filmmakers fortunately don’t take a trip to a ‘70s or ‘80s store and overwhelm you with details of the eras. Instead, the technology, bureaucracy and politics of the time periods comprise the only setting that makes sense for this story. There are some sight gags that will make audiences laugh as well as some physical comedy from Cruise and other characters. The light approach to a serious subject outranks any overly dramatic version of the same events.

American Made calls to mind other recent films with similar character arcs and settings, notably The Wolf of Wall Street and American Hustle. Not as epic in scale as those two movies, the story still spans years and fully explores Seal’s experiences at the center of the government’s strategy. When it was over, I still wanted more, and that’s a sign of a hit film. There are probably dozens of forgotten or hidden stories of American entrepreneurs who acted on behalf of the government, and American Made memorably highlights one of the more charismatic players in this eternal roulette wheel called life. 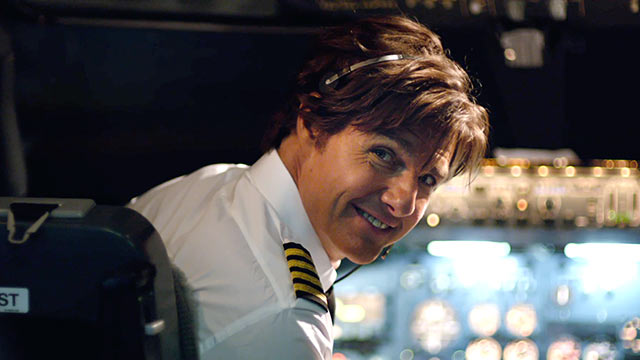