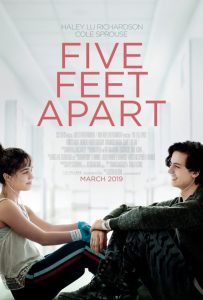 A young couple, each suffering from a deadly disease, finds love while receiving treatment in Five Feet Apart.

Stella (Haley Lu Richardson) bounds through life with an eternal optimism and energy that belies a frightening underlying reality: she suffers from an advanced case of cystic fibrosis (CF). The disease is slowly destroying her lungs, now working at just half of their normal capacity and resulting in more frequent and longer trips to the hospital. This is her new normal just as it is for many other teens in her CF ward. The condition not only erodes her body, but it also claws at the very fabric of her everyday life. Her friends from home now go about their active lives, leaving Stella to live vicariously through their shared videos. They all do their best to be supportive, but the barrier between them is only growing. It leaves Stella wondering what the point of it all really is. It’s then that she becomes distracted by a hot patient a few rooms down from her own. Will (Cole Sprouse) is everything that she’s not. He’s dark, mysterious and seemingly disinterested in the order that dominates her existence. As the two grow closer, their desire for closeness and intimacy is overshadowed by the steadfast mandate that CF patients never be less than six feet from one another for fear of passing deadly bacterial infections between them. It’s a chasm of inches both feel compelled to cross no matter the cost.

This is a film whose plot immediately stirs up fond memories of both The Fault in Our Stars and Me Before You. Unfortunately, stoking visions of those far better films is as close as this mess will ever get to either. I’ve been engaged by 30-second commercials for schmaltzy Hallmark Channel love stories more deeply.

Richardson’s undeniable charm is one of the very few things that keeps us mildly interested. Her costar Sprouse spends most of the film fighting a paralyzing case of “the brooding.” Together, they’re both certainly adorable, but continually undone by the woefully misguided plot and complete lack of competent direction. For starters, the bulk of the film takes place in a hospital ward filled with seriously ill young patients, but in classic Peanuts fashion, none seem to have much of anyone in the way of caring family. Adults are rarely, if ever, there. A scene between Stella and her mother over a cafeteria meal barely moves the emotional needle because we’re given no context. We’re not even sure that it’s her mother at first. Stella’s longtime suffering best friend and ward mate could be an orphan for all we know. Even the hospital itself seems infected by this adult-eradicating affliction. The kids run roughshod around the facility with nary a staff member in sight.

The final nail in the coffin is the blatant disconnect between the core of Stella’s entire being and the choices that she and Will ultimately make. The writers want us to believe that love is just that irresistible, but spend too much of the rest of the film selling us on Stella’s unflappable determination and focus. When it comes, the leap crashes through the frozen ice, drowning out what little life this story may have had. 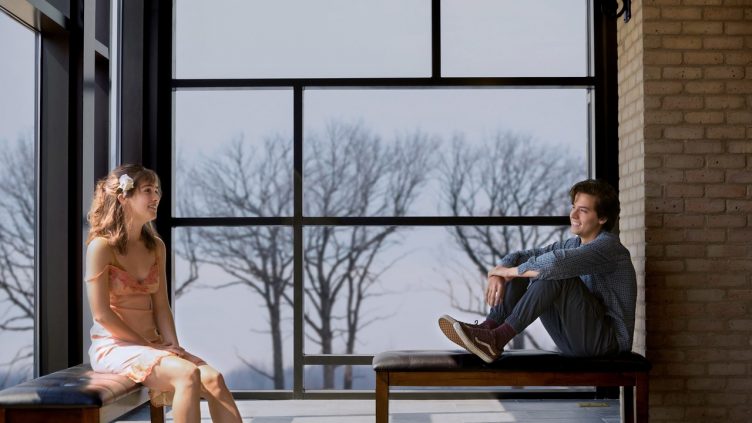