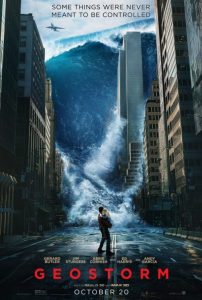 Global warming often enters today’s discussions. It should be no surprise that the weather topic serves as the spark for a disaster movie. Rather than show the possible effects of global warming over time, Geostorm instead details what happens when the system set in place to control global warming fails. I’m not a meteorologist, so I didn’t follow a lot of the mumbo jumbo weather talk. Also, don’t confuse the titular term created for this movie with the completely different Geo Storm automobile or a geomagnetic storm. Geostorm amounts more to a minor tremor than a full-scale disasterpiece.

Writer/director Dean Devlin delivered a few popular films in the 1990s as a writer with writer/director Roland Emmerich — Universal Soldier, Stargate, Independence Day and Godzilla. Lately, he has served as writer, director and executive producer of The Librarians, one of my favorite TV shows. A member of the writing team for The Librarians, Paul Guyot teamed up with Devlin for Geostorm. They should probably stick to their successful TV show. If you know anything about the film before entering the theater, you realize that you have to leave your brain at the door. A satellite system called Dutchboy that controls the Earth’s weather was created by Jake Lawson (Gerard Butler) after global warming got out of control. When the system fails after years of success and catastrophic events take place, Jake’s brother Max Lawson (Jim Sturgess) brings Jake back to try to solve the problems from the International Space Station (ISS). Max finds a political angle and sabotage. He works those angles down here in DC with his Secret Service girlfriend Sarah Wilson (Abbie Cornish) while Jake joins ISS commander Ute Fassbinder (Alexandra Maria Lara) in space to fix Dutchboy before the irreversible titular event takes place.

Devlin definitely didn’t skimp on the cast. Butler almost always makes a great leading man, and he channels his character from Olympus Has Fallen and London Has Fallen here. If you have any doubt that Butler’s character will somehow succeed, then you don’t go to the movies much. Sturgess shines in his own way as a reliable, believable actor even though a conflict between brothers Jake and Max falls flat. Geostorm doesn’t ignore the ladies, either. I’m always happy to see Cornish and Lara every couple of years, and they don’t disappoint as strong women who take control of their own situations. Adepero Oduye fortunately redefines the typical computer genius role from a nerdy guy with glasses and gives it more personality. Although I guess that I accept Andy Garcia as the President and Ed Harris as the Secretary of State and Max’s boss, it’s also good that their roles are limited so that these strong actors don’t overpower the movie. If you blink, you’ll miss Richard Schiff and Mare Winningham in a scene or two as characters that just don’t require that level of acting.

Disaster films succeed and fail based on the scenes of chaos and how much you care about the characters. Although it’s coincidental that they both take place on ships, The Poseidon Adventure and Titanic rank as my favorites in this genre because they get the recipe exactly right. Geostorm feels like a mixture of The Day After Tomorrow, Armageddon and Gravity as it struggles to find focus. Sure, there are plenty of special effects-heavy scenes of destruction all over the world, but they’re so overblown that they cross the border to ridiculous. Twister works because you see the effects of the tornadoes mostly at a human being level. In Geostorm, the viewpoint settles farther out so that buildings topple like dominoes and tidal waves wash away everything in sight. The cheesy special effects look like something out of a video game. A feeble attempt to humanize the disasters shows some random boy chasing after his dog in India, but that’s too little too late. The major characters have their own problems, and the weather events are separate scenes without them that seem added only to justify the title rather than cause concern for any of the cities.

The science in Geostorm could be called speculative at best. Although there have been hurricanes, ice storms, tidal waves and explosions in our world, they never rise to the level of destruction here. If you can’t buy the initial premise, the rest of it all falls apart. The travel times through space are faster than the spaceships in Star Trek. There are rows of space shuttles on Earth that reach the ISS in minutes regardless of the real rigors of traveling into space. It’s hard to believe that satellites can do things like freeze an entire village in Afghanistan when they malfunction or shoot lasers from space. The network of satellites over the Earth makes no sense if you consider all of the tracked space debris that’s floating around out there. Maybe they used a space laser to disintegrate the debris. Like I said earlier, you can’t think too much if you want to enjoy it.

Despite my misgivings, I found Geostorm to be watchable because of the focus on the efforts of the Lawson brothers to prevent the disasters rather than directly survive them. The writers lost me in the last few minutes with some rather awful clichés, but until that point, I was engaged but skeptical. Unfortunately, an effects-laden experience defines this genre these days, and that kind of ruins it. Not as silly as something like San Andreas, Geostorm will tide over fans of this type of film until another true disasterpiece comes along.